After the Star profiled Richard Wang, a single dad struggling to raise an 8-year-old on precarious work, a reader gives him his first stable job.

The Star follows up on Richard Wang, after having found employment at a local business recycling business.

By: Sara Mojtehedzadeh Work and Wealth reporter, Published on Wed Jan 14 2015
Richard Wang is working up a sweat on the warehouse floor.
As Wang enters the break room, boss Mark Cooper claps him warmly on the back.
“You’re working hard!” he booms.
Anything else would be out of character for Wang. But for the first time since he arrived in Canada 10 years ago, his efforts are being fairly rewarded. For the first time in a decade, he has a fulltime position with regular daytime hours. And he still can’t quite believe it. “It’s something too good to be true,” he says. 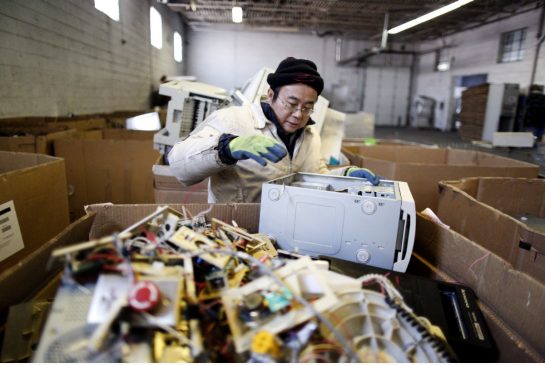 Two months ago a friend sent Cooper the Star story profiling Wang’s struggle to balance precarious work with the duties of single fatherhood.
Cooper, president of Toronto-based Revolution Recycling and father to a now 3-month-old son, was touched.
“It definitely struck a chord,” he says. “I have got an amazing family and lots of opportunities in my life and a big network. And things still don’t necessarily come easy.”
So Cooper met with Wang. He was immediately impressed by Wang’s soft-spoken manner and conscientious attitude. This, he decided, was the kind of worker he needed.
“Certain things can be taught,” he says. “But work ethic and attitude and strength of character cannot.”
Cooper’s firm, founded in 2013, collects and sorts material for processing. The task of sorting recyclables may not ooze glamour but Wang is savouring the small luxuries: a lunch break, free parking, a stipend for safety equipment.
Decades ago, these perks may have seemed ordinary. But in a city where the number of temporary workers has increased by 40 per cent since 1997, they have become the exception. What Wang loves most about his job is the stability it provides in an uncertain market.
“That’s what I’m seeking,” he says. “I just want security for myself and for my son.”
Now simple dreams long obscured by erratic schedules and constant stress are being reclaimed. This year Wang plans to find more time to read. He hopes to take 8-year-old Noah on his first real holiday, perhaps to take in Ottawa’s Tulip Festival.
Wang’s decision to share his story with Star readers in November was not easy. As Deena Ladd of the Workers Action Centre, a labour rights group, points out, many in precarious work risk losing already tenuous employment if they speak out.
But for Wang, exposing an unfair system also ultimately reconnected him to the kindness of strangers. Numerous readers reached out to him: some saw their own childhood in his son’s, others saw a fellow parent struggling to hold it all together. All wanted to help, offering to provide contacts or look over resumés.
“That helped me build the faith in the community and the people,” says Wang. “Because for a long while, honestly, I lost faith in the people. Because too many things happened to me and other immigrants.”
“I can’t think of anyone more deserving than (Richard),” says Ladd. “We’re absolutely thrilled for him and we wish the same for everyone.”
Wang cherishes the same wish. In the plain Revolution Recycling break room, he lays out a bag of tangerines for his co-workers. The fruit represent good luck in his home country and as Chinese New Year approaches, Richard Wang intends to extend his in advance.

Single Fathers in Ontario are extremely rare. Ontario's Fascist program of Gender Superiority results in 99% of custody cases being given to even the most violent and troubled mothers.

Ontario Police act to permanently destroy any father who dares to call the Police when they are victims of Domestic Violence.

Ottawa Police Det. Peter Van Der Zander Fabricated evidence to NOT charge a woman who with a record of violence attempted to strangle a full time father. Van Der Zander fabricated a work of fiction, in a report including that she denied choking him. The police in contempt of numerous court orders failed to provide the video that eventually showed he never asked her the question.

He was removed from the file and another detective 6 months later charged her with death threat and assault for some 55 assaults in one day AFTER approval from a Crown Attorney.

Van Der Zander removed the children from the fathers full time care, sent the violent mother home in a police car, and incarcerated the father without charges for the next day. Long after he released the mother expressing concerns that she might kill him with a knife "next time" and advising her to be the first to call police "next time", he terrorized the father alluding he was a pedophile without any such allegations.

The CAS stepped in, had the head Crown TARA DOBEC "Stay the charges", sent her to "anger management" and 2 days later she assaulted her new male partner with a strangle hold to the neck, with her thumbs intertwined around his neck, she told him "My father was KGB, I know what I'm doing".

The CAS then without a hearing, without notice went to Corrupt Judge Monique Metivier and had her issue an illegal order in favor of the mother.

The Star has yet to run the Story of how tens of thousands of "single Fathers" get to join the 99% of Fathers in Ontario Family Court whose relationships with their children are terminated by Ontario's Extreme Feminist Fascist Police of Gender Superiority.

The CAS are commonly referred to by lawyers as "The Mother's Aid Society". Marguerite Lewis and the CAS illegally then obtained an "Exparte Order"from from a corrupt Judge Monique Metivier for custody of children with an extremely violent mother.

That order was illegally and corruptly obtained by the CAS because they acted in contempt of the Child and Family Services act S.51(2)(a) that requires children to be returned to the parent who "had charge" of the child, in this case, the mother never spent any time with the children who the mother habitually assaulted along with the father.

Our Corrupt Judiciary largely Former CAS lawyers "anointed" as Judges habitually "Rubber Stamp" any and all obviously illegal requests of the CAS.

The fathers rarely ever work again, the stigma of having their children removed destroys their reputations, their ability to earn an income and or any ability to move on with their lives or have any contact with children.

Ontario is a Corrupt Fascist state where 50% of the population are treated as criminals because they are born with testicles.