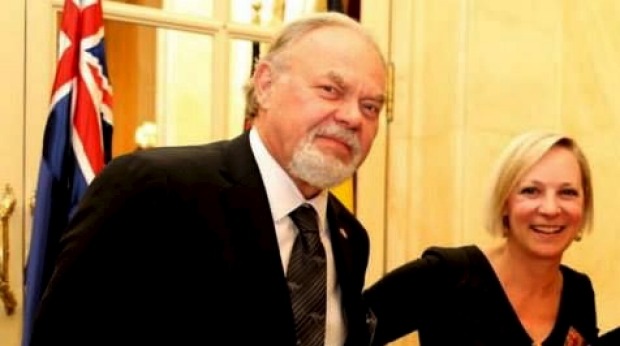 An alleged child molestation scandal at Australia's Spanish embassy has been a "terrible burden" for the former ambassador and her accused husband, his lawyers say.

In a statement to Fairfax Media, lawyers for Vytas Bronius Kapociunas, 71, say the well-known artist and sculptor emphatically denies allegations that he sexually abused a young girl linked to the Australian embassy in Spain.

He is currently accused of three charges of sexual intercourse with a child outside of Australia, and was on Thursday committed to stand trial in the ACT Supreme Court.

Chloe Preston, of Collaery Lawyers, said in the statement that Kapociunas will fight hard to clear his name.

"My client most emphatically denies the charges," she said.

"He is bewildered by them and proposes to establish from numerous witnesses, including young persons with whom he has had contact over the years, that no impropriety of any sort has ever occurred."

Kapociunas' wife, Jane Hardy, returned early from her term as Australia's ambassador to Spain in November following her husband's arrest in September.

She was only two years into her three year appointment, and a new ambassador has not yet been announced.

The Department of Foreign Affairs and Trade say she returned by "mutual agreement" and have emphasised that "no allegations of inappropriate or illegal behaviour" have been made against Ms Hardy.

Ms Preston said Kapociunas is receiving counselling, and is being supported by friends and family.

"The allegations are a terrible burden for himself and his wife."

The alleged overseas offences are before the ACT courts under Commonwealth law.

Kapociunas was arrested at Canberra Airport in September last year.

Court documents said the allegations surfaced after the girl told her mother that the artist kept kissing her.

When questioned further, the girl allegedly said he "kisses me on the lips, and here," pointing to her groin.

The mother reported the conversation to the Australian Federal Police.

Kapociunas agreed to a police interview, and allegedly acknowledged he had had physical contact with the girl that included kissing when greeting and saying farewell, piggy-back rides, and blowing raspberries on her belly button.

But he denied abusing the girl.

He was originally charged with one count of sexual intercourse with a child outside of Australia and first appeared in court in October.

Ms Hardy's identity and diplomatic position were previously subject to a temporary court suppression order, which has since expired.

Lithuanian-born Kapociunas studied art in South Australian and lived Spain, France and Britain before he wed Ms Hardy in 1982.

He has since accompanied her on diplomatic postings to Malaysia, South Korean, the United States, and Spain.

His work has been exhibited at the Australian embassy in Washington.

On Thursday, Chief Magistrate Lorraine Walker continued the defendant's bail, but added the condition that he notify the court if he changes address.

The case will appear for the first time in the ACT Supreme Court for directions next month.

This case has got to be one of the lowest probabilities of a conviction ever laid in Australia.

But if Vytas Bronius Kapociunas had been in Ottawa, the story could well be very different.

The Ottawa Police are notorious for laying charges like this, generally at the request of a female and rarely ever from a male.

There is a Double Standard with the evidence required to lay a charge against a male and a female.

Now Australia will have its Police put to shame in laying these charges.

These charges are laid for alleged events that occurred in SPAIN, Europe when apparently the girl was visiting his home and occurred after he gave her a piggy back ride.

The evidence in this case, to prove or disprove the case,  is probably never going to reach trial, and is most probably all ready effectively destroyed.

Another classic example how the Judicial Council is an insult to Justice.

The Corrupt Dis-Honourable Justice Denis Power "Retired" to avoid a Judicial investigation after he issued a Restraining Order banishing a father from the City of Kingston for life, because the Mother was charged with Five Counts of Assaulting the Father.

That's right, The Corrupt Dis Honourable Denis Power claimed that a JUDGE issuing Criminal Charges against a mother AFTER hearing 3 trumped up criminal charges against a father was "harassment".

Then there is the Dis Honourable and Corrupt

Monique Metivier who also resigned AFTER she

issued an EXPARTE order for custody without notice on the father by the Children's Aid Society of Ottawa.

That EXPARTE Order was turned into a Final Order to cover up the order of the corrupt Monique Metivier by the DisHonourable and Corrupt Robert Maranger.

The first one to go will be