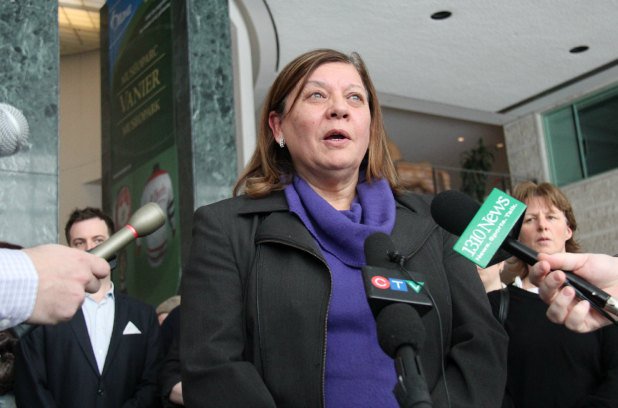 Christine Leadman, executive director of the Bank Street BIA, said she hopes to give some "credibility" to Capital Pride in 2015 if the BIA receives approval to oversee the festival's finances.

A new community group is partnering with the Bank Street Business Improvement Area to propose a financial plan to rescue Capital Pride after the festival went bankrupt last year.

The annual festival is marking its 30th anniversary this year, which is why community member Tammy Dopson stepped in make sure it has a future.

At a press conference at City Hall Thursday, Dopson announced a proposal that would bring the Capital Pride back to Bank Street and have the BIA oversee all of the festival’s finances.

The BIA will not be responsible for planning events, but will be “formally accountable for financial expenditures and reporting for the festival,” said Dopson.

Problems with the festival surfaced last fall when it was revealed the board allegedly failed to pay several sponsors. A financial statement of operations tabled at an annual general meeting held in December showed a deficit of $106,000 as the board voted to go bankrupt.

On Thursday, the new group said a community advisory committee will be created and is expected to submit a formal plan to Somerset Ward Coun. Catherine McKenney later this month. The proposal also includes the creation of an operations committee to manage day-to-day planning, led by a festival producer.

Dopson said under the new “grassroots initiative” the intent is to bring Capital Pride back to Bank Street, but it is still unclear if any events associated with the festival would be hosted at City Hall as they have been in the past. The group’s vision for the festival and possible sponsorships were not discussed Thursday.

Christine Leadman, executive director of the Bank Street BIA, said the BIA can give some “credibility ” to the event in light of last year’s setback.

“I think there was a vacuum and I think that a strong proponent in the community came forward in a very professional, organized fashion,” said Christine Leadman, executive director of the Bank Street BIA. “I think it is important that it is a community-led event.”

McKenney supports the new governance structure and said she doesn’t expect the new group to have problems acquiring sponsorship deals under the same Capital Pride name.

When it comes to supporters of Gay Pride, The Children's Aid Society of Ottawa takes the cake.

The Children's Aid Society is entitled to believe in diversity however
they discriminate against heterosexual males, especially fathers.

Across Ontario, the Criminal Cartel of Children's Aid Societies seeks out
and employs those with a pathological hatred of fathers.

Marguerite Isobel Lewis goes to extraordinary lengths in her war on
fathers.

Recently she personally fabricated evidence to place children in the care
of an extremely violent mother who admitted assaulting the children and the
father, even telling him that he deserved absolute cruelty.

Marguerite Lewis gave personal evidence , a complete fabrication, that
the father made admissions when no admissions were made.

She then fabricated that the mother's admission to assaulting the children
was not an assault but discipline, a classic lie told in numerous cases
where Child Protection Workers Fabricate evidence for mothers. She did that
in front of a Corrupt Judge Timothy Minnema who used to work for Ontario's
Criminal Cartel of the Children's Aid Societies at Kingston before he became
a Judge, a rubber stamp for the CAS, and even personally fabricates evidence
against fathers not to mention turn a deliberate blind eye to CAS lawyers
when they blatantly fabricate evidence in front of him.

Ottawa has another pathological man hater, CAS lawyer Tracey Engelking,
who obstructs justice by going to her special judges who give her "Ex Parte
Orders" to place children with the most violent of mothers, without notice
to the father.

Its called Obstruction of Justice.

Its also Deliberate Child Abuse by a lawyer, entrusted by society to
serve and protect Children.

Promotion of hatred is also a criminal offence. The persons mentioned here are effectively promoting hatred towards fathers and in particular, promoting murder and violence by women towards men. These are some of the scariest most dangerous people you will meet in Ottawa if you are father or a child who has a father especially if they happen to be the victims of female violence.

When you march on Gay Pride Day, watch out for two Professional Criminals and Child Abusers, Marguerite Lewis, Tracey Engelking and other Ottawa Criminals like Justice Jennifer Monique Metivier, Justice Jennifer Belishen who used to work at the Children's Aid Society of Ottawa.

Before you rush to "Flag" this post, be advised that the Ottawa Police Sgt. John Gibbons did an investigation and after reviewing the evidence concluded with respect to Marguerite Lewis that "She lied to the judge, its perjury".

Later, Tracey Engelking spoke with Sgt. John Gibbons and he dropped the investigation.

The corrupt Judge who gave Tracey Engleking her "Exparte" illegal order, that was "obstruction of Justice" was none other than Justice Monique Metivier, who promptly "Retired" to avoid action by the Judicial Council.