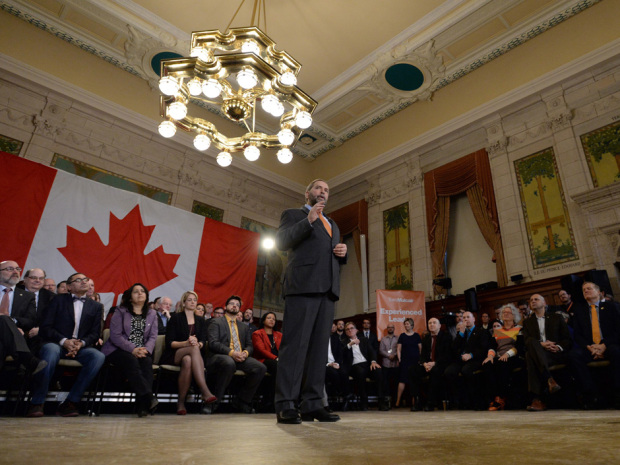 OTTAWA — Tom Mulcair has re-arranged the deckchairs on the good ship NDP by bringing in some new senior staff, but the maiden voyage of 2015 did little to suggest his party will escape submersion by a Justin Trudeau tsunami in the coming election.

Mr. Mulcair was speaking at a caucus strategy session in Parliament’s Reading Room, where he revealed he is replacing Raoul Gébert as chief of staff with Alain Gaul, who worked for him in the same role when he was a Quebec provincial minister. Mr. Gébert will remain as a Quebec adviser. Brad Lavigne, who helped mastermind Jack Layton’s Orange Wave, will return as senior campaign adviser, and Michael Balagus, who led the NDP to successive victories in Manitoba, will head up the crucial Ontario campaign.

The 2015 reboot is an attempt to inject some adrenaline into a caucus that has been demoralized by defections (Glenn Thibeault to the Ontario Liberals is the latest of six such desertions) and retirement announcements (Yvon Godin has joined Chris Charlton, Joe Comartin and Libby Davies in resolving to step down at the next election).

To that end, it was a reasonably successful exercise. Mr. Mulcair was given a rousing standing ovation for expounding on the values of generosity and community he said have guided him as a husband, father and grandfather, as well as his 35 years of public service. “These are the values that will guide me as your Prime Minister,” he said.

Less widely hailed was a $5-billion platform commitment, unveiled without fanfare, when Mr. Mulcair said that the NDP would keep the recent Conservative additions to the universal child care benefit. The goal is to blunt Tory attacks that his party will take back the cheques that will start landing in July. But the party is already committed to a $5-billion childcare program, so another $5-billion pledge in the current fiscal climate is bold to the point of foolhardiness.

The speech was also notable for the more aggressive line Mr. Mulcair took going after those progressive voters who have told pollsters they intend to vote Liberal.

The NDP leader made much of his 35 years of in public life and his experience around the Quebec Cabinet table. “Being Prime Minister is not an entry-level job. Over the coming weeks and months, we’ll invite Canadians to ask themselves which leader has the experience to defeat Mr. Harper and the plan to repair the damage he’s done,” he said.

Not only does the Liberal leader lack experience, he lacks a plan. “Justin Trudeau still believes that he can just inherit power without proposing a thing,” he said.

This is an attack that has a limited life-span — the Liberals will eventually break cover with a platform.

Then we will be back to contrasting the relative merits of the two men. The problem is that the Conservatives have been selling this line since Mr. Trudeau was elected leader and polls suggests voters aren’t buying.

An Abacus poll from last fall suggested only one in four Canadians agrees Mr. Trudeau is in over his head. Another 28% said they felt he could learn on the job, while 23% said they were unsure and needed to see more of the Liberal leader.

In short, voters are giving Mr. Trudeau the benefit of the doubt — the political equivalent of being bulletproof.

Mr. Mulcair looked like the coming man when he was elected leader. A progressive mirror image of Stephen Harper, he was deemed experienced, ruthless and tough enough to play the Prime Minister at his own game.

But the game changed with the election of Mr. Trudeau. Mr. Mulcair has been in danger of looking like the Betamax of the political format war — a superior technology made obsolete by its cheaper, racier competitor, VHS.

There is only so much the leader’s new team can do about that – they can’t turn him into something he isn’t.

Once it became clear that deprecating Mr. Trudeau was having limited success, the Conservatives pivoted to concentrate on the issues Mr. Harper wants to talk about – personal and economic security.

It will be hard for the NDP to follow suit — they occupy much of the same policy ground as the Liberals, making differentiation difficult.

Mr. Mulcair can perhaps seek solace in Abraham Lincoln’s words: “Why should there not be a patient confidence in the ultimate justice of the people? Is there any better or equal hope in the world?”

If Mr. Trudeau is as clueless as Mr. Mulcair suggests he is, he will be found out by the people, and it will be the NDP leader who will emerge as the progressive standard-bearer.