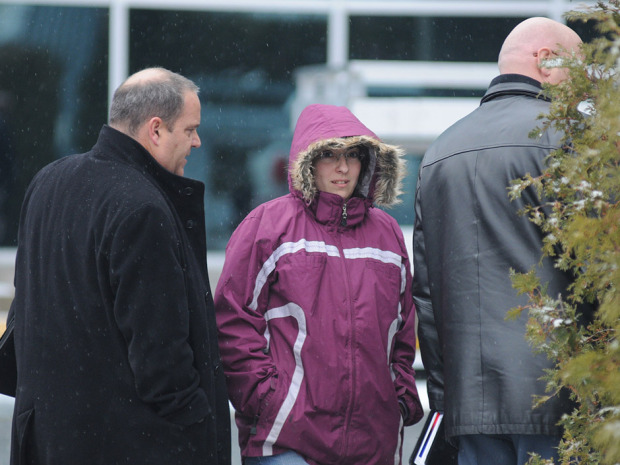 Sonia Blanchette, centre, is pictured in December 2011 in Drummondville after her arrest in another incident.

A Crown prosecutor in Quebec is confirming the death of a woman who was charged with murdering her three young children.

Rene Verret says Sonia Blanchette has died but he is not confirming a Radio-Canada report she starved herself to death in a Montreal hospital.

Blanchette was to appear in court today to have a date set for her first-degree murder trial.

They were found dead in her apartment in Drummondville, midway between Montreal and Quebec City.

A coroner ruled the two youngest children drowned while the oldest child was killed by a combination of strangling and drowning.

Canada effectively promotes the murder of children and fathers by its bias in favour of women.

Ottawa CAS lawyer Marguerite Isobel Lewis is a classic example of an Evidence Fabricating lawyer for the CAS who protects the most violent mothers who admit assaulting children and fathers.

Recently she fabricated evidence to protect a violent woman with a long record of attempting to strangle partners, and spoke of killing her children by strangulation.

A gutless Cowardly cop, Det. John Gibbons initially concluded "she lied to the judge, its perjury" however he dropped that investigation upon the chilling phone call with one Tracey Engelking, a lawyer for the Children's Aid Society who commits serious offences like Obstruct Justice by seeking orders , without a hearing before Corrupt Judges like