Officer in G20 disciplinary hearing claims battle against ‘anarchists’ only 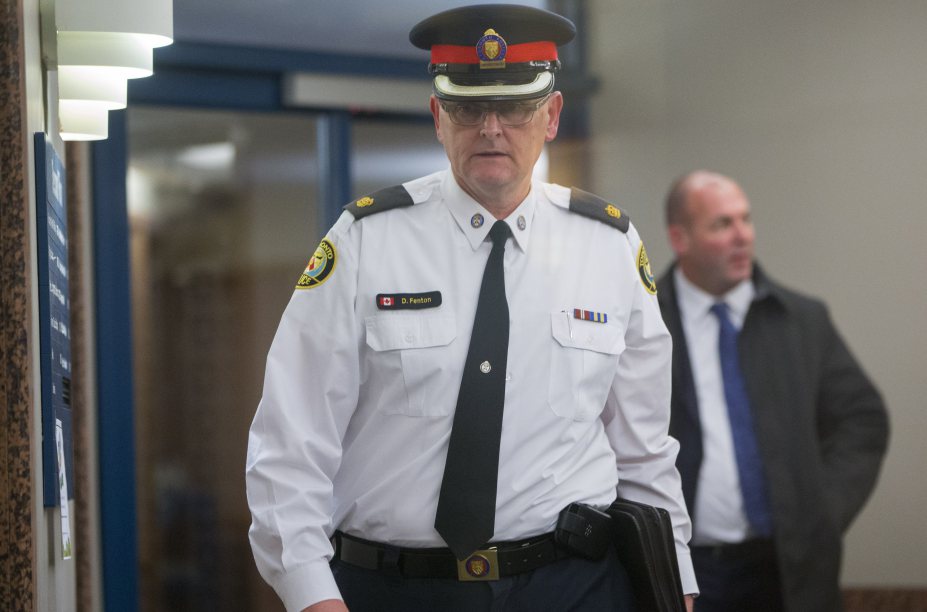 Toronto Police Supt. David (Mark) Fenton defended on Friday his actions at the G20 summit, saying that the city was being threatened by Black Bloc “anarchists.”

“I was only interested in the safety of the city of Toronto,” Fenton told a police disciplinary hearing. “I wanted the public to be safe.”

Fenton has been charged with unlawful arrest and discreditable conduct for ordering mass arrests and “kettling” — a controversial police control tactic that involves corralling and boxing-in a group of people — during the June 2010 G20 summit in Toronto. Fenton is the most senior officer to be charged under the Police Services Act in relation to the event.

On Friday, Fenton was cross-examined by prosecutor Brendan Van Niejenhuis.

Fenton likened the chaos that engulfed Toronto during the G20 to the violence that once racked his native Northern Ireland, which he left at the age of 22 in 1982.

Under cross-examination, Fenton suggested that ordinary citizens would have steered clear of the G20 protests if they weren’t involved. He also admitted that significant numbers of people who had nothing to do with protests were arrested in two kettling incidents while he controlled police activities from the Major Incident Command Centre at Toronto Police headquarters on College St.

The second kettling incident, which occurred at the intersection of Queen and Spadina on the evening of June 27, was meant to stop protesters from reaching the security fence that cordoned off the area where G20 delegates were meeting, Fenton said.

“I had intelligence that an attack on the fence was imminent,” Fenton told the hearing Friday.

On Thursday, he stated that “this was the last opportunity, if you will, for the anarchists to fulfil their stated goal of taking down the fence.”

Contrary to another police officer’s testimony, Fenton maintained that he authorized officers on the ground to exercise discretion and allow those not involved in the protests to leave the kettle at Queen and Spadina.

“My hope and goal was that we would be able to end this day without any further arrests,” Fenton said. “I never gave an order to arrest all present.”

Fenton also maintained that police officers at the intersection communicated with protesters to disperse. Witnesses have testified otherwise.

When the crowd failed to leave the intersection, Fenton acknowledged, he ordered them to be boxed in by police.

“One of the effects of a box is to calm a crowd,” he told the hearing.

Hundreds were arrested for breach of the peace after being kettled. Once they were arrested, Fenton stated that he lacked the authority to order their release.

The prosecution will continue cross-examining Fenton once the hearing resumes March 9. With lawyers’ final submissions not expected until June, the hearing officer’s final decision will likely come five years after the G20 summit.

Fenton is a scapegoat, and perhaps the bottom of the Police Barrel, the rat who the police decided to use a sacrificial lamb in a semblance of justice while all the other
police who committed a host of criminal offences walk free.

That's why Canada is a Corrupt Lawless State.

When it comes to Rotten Cops, spare a thought for the victims of the Ottawa Police Program of Gender Superiority.

The Ottawa Police are notorious for arresting and charging any male who dares to call police and report that he is the victim of Female Violence.

Recently officers brought in one of Ontario's most violent females, she had for
six years been assaulting children and the children's father. On that particular
day, he finally called police because after hours of having his head slapped
around, she tried to strangle him to death using a military unarmed combat
technique of "special forces".

The police found him bleeding around the neck with scratch marks and extensive
bruising resulting from habitual assaults. They gave that information to Det.
Van Der Zander who wrote in his report that the mother "Denied choking him" when
the video of that interview later disclosed that he never asked her the
question.

Van Der Zander did however express a concern and gave her advice, that "next
time she she might kill him with a knife and advised her to "next time" be the
first to call the 911 and that the Police would take care of him.

Van Der Zander then sent her home as a victim, in a police car, without
interviewing the victim, without photographing his injuries. He kept the father
incarcerated for most of the next 24 hours and when he finally did interview
him, he terrorized the male victim of domestic violence with allegations of
being a pedophile when he had no such information.

Van Der Zander was caught Fabricating Evidence by Staff Sgt. Isobel Granger and
Sgt. Norm Friel who obstructed Justice and covered up for him. They pulled him
off the case and refused to look at his crimes.

Six months later another officer charged the same woman with repeated death
threats, and assault for some 55 Assaults on another sample day taken from one
of the days in the last six years.

Those charges were screened and approved by an Ottawa Crown Attorney however two
weeks later, the Children's Aid Society of Ottawa had TARA DOBEC Ottawa's lead
Crown Attorney STAY the charges.

When we have Corrupt Crown Attorney's protecting Corrupt Rotten Cops like Van
Der Zander and lawyers like Marguerite Lewis and Tracey Englelking, it makes
Canada a truly Fascist Corrupt Country.

If the Police wonder why Canadians view them as corrupt, they have only
themselves to blame for their failure to ensure that Police Officers do NOT have