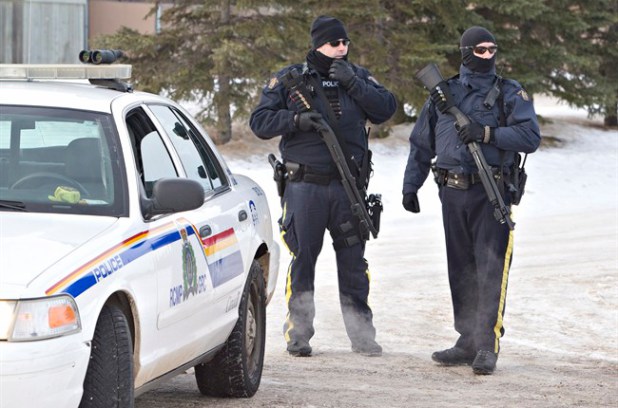 Police search for a suspect in the shooting of two RCMP officers in St. Albert, Alta., on Saturday, January 17, 2015. Two RCMP officers are in hospital with injuries and the suspect is still at large. THE CANADIAN PRESS/Jason Franson

ST. ALBERT, Alta. – RCMP say they have found a man suspected of gunning down two officers at a casino just outside Edmonton early Saturday morning, leaving one of the officers in grave condition.

There was no immediate word on the suspect’s condition or identity.

“There is no longer any public safety threat related to this incident,” police said in a release, noting there would be a news conference later Saturday to release more details. “The RCMP thanks the public for the messages and support we have received.”

Both officers were being treated in hospital.

The shooting happened in St. Albert, an affluent community of about 60,000 bordering Edmonton’s city limits to the northwest where the national force handles policing.

RCMP Assistant Commissioner Marlin Degrand said a fairly routine investigation into a suspicious vehicle led the two officers to the Apex Casino in an industrial area at about 3 a.m.

The officers, Degrand said, determined the vehicle was stolen and went inside the casino to identify suspects.

That’s when shots rang out and the shooter took off.

Degrand said it didn’t appear the officers were expecting trouble when they entered the casino.

The two were felled without getting a chance to return fire, he said.

Police tracked the armed and dangerous suspect to a rural area near the Sturgeon Valley Golf Course, not far from the shooting scene.

Mounties blocked off several roads as they searched and a helicopter flew overhead.

The roads were opened shortly after word came that the suspect had been located.

Investigator seemed to be focusing their attention on an upscale home on an acreage in a rural neighbourhood called Sturgeon Heights.

Police were blocking access to the property. It appeared the front door of the home had been forced open.

A dark-coloured pickup truck left partly in the ditch not far from the home was hauled away from the scene.

Degrand couldn’t say how many shots were fired, nor was he able to say how many witnesses were in the casino at the time of the shooting.

He said police knew the type of gun used, but he wasn’t prepared to release that information.

“This incident serves to remind us all of the dangers that our front-line responders everywhere face in the performance of their duties,” Degrand said.

“Our thoughts are with our injured officers and their loved ones and our colleagues who are courageously pursuing this investigation.”

“Attacking those who protect our lives and property is an attack on all residents,” the mayor said in a statement.

Prime Minister Stephen Harper released a statement on Twitter expressing his concern for the shooting.

“Canada’s thoughts and prayers are with (Alberta RCMP) officers today,” the tweet read.

The Alberta Gaming and Liquor Commission also extended its condolences.

“Our hearts and prayers are with all of those involved,” it said. “The casino will remain closed while the investigation is underway. The AGLC will continue to support the RCMP in any way possible.”

With the greatest respect to every decent police officer and to the families and associates of the murdered officers, this post is being made in the public interest. The following opinion is one you will hear from many police officers but who are unable to express a public opinion.

At present the RCMP and police forces across Canada are all seeking more "fire power" upgraded weapons etc.

That will never stop the endless murder of police officers by those who are mentally ill violent,  delusional or, religious radicals who believe that shooting police officers is their way of fighting what they see as a corrupt society.

The Police in Canada are in part, the authors of their own misfortune. There is no Accountability across Canada for police officers.

While most police officers set an example, there is an obvious problem with many police forces of systemic and habitual criminal offenses that in Police parlance is called "Old School Policing" which means, cops are allowed to fabricate evidence to suit Police Objectives that includes, malicious prosecutions, Fabricating evidence, and obstructing justice.

Recently officers brought in one of Ontario's most violent females, she had for six years been assaulting children and the children's father. On that particular day, he finally called police because after hours of having his head slapped around, she  tried to strangle him to death using a military unarmed combat technique of "special forces".

The police found him bleeding around the neck with scratch marks and extensive bruising resulting from habitual assaults.  They gave that information to Det. Van Der Zander who wrote in his report that the mother "Denied choking him" when the video of that interview later disclosed that he never asked her the question.

Van Der Zander did however express a concern and gave her advice,  that "next time she she might kill him with a knife and advised her to "next time" be the first to call the 911 and that the Police would take care of him.

Van Der Zander then sent her home as a victim, in a police car, without interviewing the victim, without photographing his injuries. He kept the father incarcerated for most of the next 24 hours and when he finally did interview him, he terrorized the male victim of domestic violence with allegations of being a pedophile when he had no such information.

Van Der Zander was caught Fabricating Evidence by Staff Sgt. Isobel Granger and Sgt. Norm Friel who obstructed Justice and covered up for him. They pulled him off the case and refused to look at his crimes.

Six months later another officer charged the same woman with repeated death threats, and assault for some 55 Assaults on another sample day taken from one of the days in the last six years.

Those charges were screened and approved by an Ottawa Crown Attorney however two weeks later, the Children's Aid Society of Ottawa had TARA DOBEC Ottawa's lead Crown Attorney STAY the charges.

When we have Corrupt Crown Attorney's protecting Corrupt Rotten Cops like Van Der Zander and lawyers like Marguerite Lewis and Tracey Englelking, it makes Canada a truly Fascist Corrupt Country.

If the Police wonder why Canadians view them as corrupt, they have only themselves to blame for their failure to ensure that Police Officers do NOT have
immunity from Criminal prosecution.