Const. David Wynn has been in hospital since he was gunned down early Saturday morning and was not expected to survive. Wynn’s partner, also shot, faces long recovery.

The wife of an RCMP officer gravely wounded in a weekend shooting near Edmonton was tearful as she said the family was saying its 'goodbyes' to her husband Monday night. Const. David Wynn is not expected to survive his injuries

By: John Cotter The Canadian Press, Dean Bennett The Canadian Press, Published on Mon Jan 19 2015
EDMONTON—The wife of an RCMP officer shot in the head at a casino north of Edmonton broke down Monday as she spoke of saying goodbye to her gravely injured husband.
“We’re saying our goodbyes today and then from there, he’ll be in a better place,” Shelly MacInnis-Wynn said at an evening news conference.
“Today’s the day we say goodbye to Dave.”
Const. David Wynn has been in hospital since he was gunned down early Saturday morning and was not expected to survive.
MacInnis-Wynn thanked the RCMP, the city of St. Albert and people in Nova Scotia, where Wynn worked as a paramedic before joining the Mounties.
Wynn’s sister, Dawn Sephton, thanked the medical teams at two Edmonton hospitals for the care they gave her little brother. 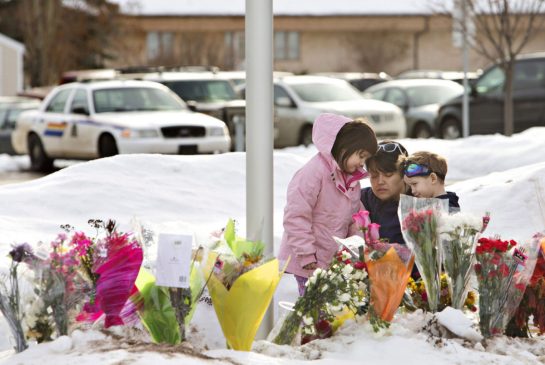 Irene Roy and her children place flowers near the RCMP detachment in St. Albert, Alta., on Monday. Constable David Wynn was critically wounded in a shooting at a casino near Edmonton early Saturday.

“As a family I would ask you to continue to support and respect the RCMP and the phenomenal job that they do in the service of all Canadians,” Sephton said.
The 42-year-old father of three was one of two officers shot at the Apex Casino in St. Albert as they investigated a stolen pickup truck.
The other officer, auxiliary Const. Derek Bond, was shot in the arm and torso and faces a long recovery.
The family’s statement came as court and parole board documents revealed the violent criminal background of the shooter, who was found dead in a home not far from the scene.
The documents show that Shawn Rehn, 34, had a long history of assaults, weapons convictions, break-ins and drug use that stretched back to his teenage years in the mid-1990s.
“You are a dangerous person who has demonstrated blatant disregard toward the criminal justice system as well as lack of respect to the public in general,” the Parole Board of Canada said when it denied Shawn Rehn day parole in 2006.
“Your crimes are continuous and increasing in seriousness and often resulted in serious psychological, emotional and financial harm to victims.”
Six years later, before Rehn left jail on statutory release on different charges, the board said that his “reintegration potential is assessed as low.”
He was rearrested in July 2013 with a fellow parolee who had convictions for armed robbery. Police searched Rehn’s car and found a crack pipe, pellet pistol and knives.
The parole board rebuked Rehn for ignoring bans on having firearms.
“When you are in possession of weapons, the public is at serious risk of harm from you, as your past offending demonstrates,” wrote the board the following September.
RCMP Commissioner Bob Paulson remarked on Rehn’s criminal history, particularly a series of overlapping firearms bans. Paulson said it may provoke an examination of the police and justice system that allowed Rehn to be free.
“I’ve been policing for 30 years and I’ve never seen anything the likes of this,” Paulson said on the weekend.
When four Mounties were gunned down by a cop-hating criminal in Mayerthorpe, Alta., in 2005, the Alberta Crown did a formal review of the shooter’s prosecution history to determine if anything could have been done better.
That review found that while James Roszko had been charged with more than 40 crimes and been flagged as a potential dangerous offender, he did not meet the standard for indefinite detention.
A spokesperson with Alberta’s Justice Department declined to comment on the Rehn case Monday.
The former pipefitter and oilsands worker’s criminal record, made public Monday by Alberta Justice, details a lengthy list of 57 convictions, starting in April 1999 when he was ordered jailed for two months for theft and break and enter.
In the years that followed, when Rehn wasn’t serving time, he was racking up convictions in Edmonton, Calgary and the smaller communities of Evansburg and Drumheller.
They were for assault, assault with a weapon, drug possession and possession of prohibited firearms. He obstructed a peace officer, escaped lawful custody and drove while disqualified.
He also was convicted for breaking and entering, theft and possession of stolen property.
Parole Board of Canada documents show Rehn served two federal jail terms as an adult.
The first was a two-year sentence for possession of stolen property and driving while disqualified. The second was for three years on charges including escaping custody and possession of a loaded prohibited weapon.
Collectively, he was sentenced to serve more than 12 years in custody, but it’s not clear how much of that time he actually spent behind bars.
On the day he died, he was still facing 30 charges for four separate offences, including fraud, resisting a peace officer, escaping lawful custody, possessing a prohibited firearm, failing to appear in court, failing to stop for police, dangerous driving and multiple charges of breaching bail conditions.

The RCMP have the record of the highest ethical standard of most police forces in Canada. Their nation wide system has what most other police forces lack, an internal system of accountability that while not meeting the public's full expectations is still better than what is offered by local police forces.

With the greatest respect to the families of the officers, there is also a nationwide problem with a lack of accountability for police officers especially those in Ontario where there is virtually no accountability.

It's the underbelly of the various police forces who damage the reputations, and create the risks for every other officer who spends their careers upholding and protecting the law.

While we all pray and wish the best for the families involved spare a thought for the victims of the Underbelly of the Police forces like Det. Peter Van Der Zander #1639, Cst. W.S. Sam (Wayne)#880 Smith, Cst. Wan T. Ngyen #952 of the Ottawa Police who personally fabricate evidence to NOT charge the most violent of criminals.

Its the vile child abusing evidence fabricating excriment of police like Det. Peter Van Der Zander #1639, W.S. Smith and Van T. Ngyen #952 that make them Canada's most dangerous criminals who in Ontario, unfortunately have immunity from criminal prosecution.

Before you rush to flag this item, remember, if no one speaks out, the vile underbelly of the Police in Canada like the Criminal Det. Peter Van Der Zander, Smith and Ngyen, just to name three, will only be encouraged to further commit atrocities and terrorize the male victims of unprovoked violence against children and fathers.

The Ottawa Police have no interest in prosecuting the criminals who work for them making them one of Canada's largest Criminal Organizations.