Ryan Millet was a member of the Facebook group where misogynistic comments were posted. His lawyer describes him as a whistleblower. 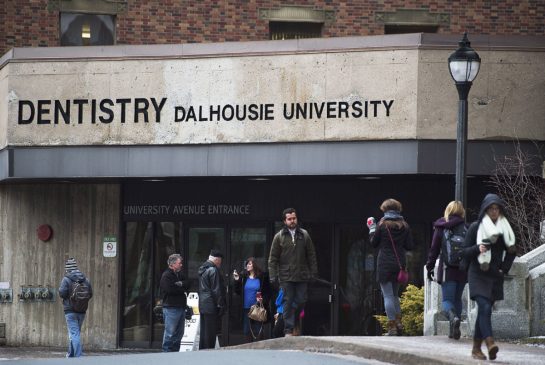 By: The Canadian Press, Published on Tue Jan 20 2015
HALIFAX — A disciplinary hearing is scheduled for Tuesday for one of the 13 members of a Facebook group where misogynistic comments were posted about female classmates at Dalhousie University's dentistry school.
The lawyer for Ryan Millet says he blew the whistle on students who made the remarks and will argue at the in-camera hearing that he should have his clinic privileges reinstated.
Bruce MacIntosh said in a statement that Millet took a stand against comments he thought were offensive and encouraged other members of the Facebook group to remove them but was nonetheless unfairly sanctioned by Dalhousie University.
A spokesman for the school said it is committed to a just process and will evaluate each man's individual case as they proceed through an academic standards class committee.
In addition to having their clinic privileges suspended, Millet and 12 other members of the Facebook group have been ordered to attend classes apart from the rest of their fellow fourth-year dentistry students.
Dalhousie University has announced an independent task force will look into what happened and a restorative justice process will hear from 14 women and all of the 13 members of the Facebook group except Millet will participate in that process.
The Facebook page at the centre of the controversy has been taken down.
But according to the CBC, members of the Facebook group voted on which woman they'd like to have "hate" sex with and joked about using chloroform on women. The CBC said in another post, a woman is shown in a bikini with a caption that says, "Bang until stress is relieved or unconscious (girl)."

Canada has a double standard when it comes to the law and gender.

Recently the Ottawa Police arrested a Female Dentistry student after her husband reported that she had attempted to strangle him with two hands to the throat in such a grip it left him scratch marks and bleeding around the neck which was observed by police officers upon arrival.

When the police arrived a witness noticed that Cst. Smith was not taking any note of large bruises on the father, scratch marks and blood around his neck. Cst. Smith was then forced by the witness to make a note.

Smith gave his notes to Detective Peter Van Der Zander #1639 that "the mother repeatedly slapped him around the head, pulled him by the hair on to a couch where she attempted to strangle him with both hands around his throat.

Van Der Zander listened to an audio recording of the assault, he heard the assaults by the mother and the father's cries of pain. Van der Zander heard the father say "that hurt" and she replied "it should hurt, you deserve absolute cruelty".

Van Der Zander first interviewed the mother & fabricated a report that she denied choking him when he never asked her the question. After telling her he was concerned she might kill him with a knife next time, he released her without charges without first interviewing the male victim and refused to photograph his injuries.

The Child Abusing Evidence Fabricating Det. Van Der Zander then took the children from the full time father and gave them to the violent Female Dentistry student.

The Press and society have adopted an almost fascist assumptions with respect to gender. It only takes an isolated example of misogynistic statements made in a private facebook page to effectively tarnish every man in Canada.

The problem here is not criminal but a civil problem of personal conduct by medical professionals in a position of trust.

If this had been women talking in a private facebook group, odds are no one would have ratted them out and if it the whistle was blown, nothing would have happened.

These misogynistic males do not represent all men or all fathers in Canada. Dental Students are generally exceptionally intelligent, talented, and at least on the surface charismatic and professional. As a group, they contain a wide variety of personalities from one extreme to the other.

The reality is the interviews to gain entrance as a Medical Professional, or a lawyer or a Judge do not require written personality or interviews by psychologists to screen out those with personality disorders that make them a risk to society.

This case is a classic case of how professionals can have such a selfish lack of empathy as to raise serious questions as to their suitability to be placed in positions of trust in society.

The problem is, psychopaths and borderline personalities are the very personalities that rise the positions of absolute power in society.