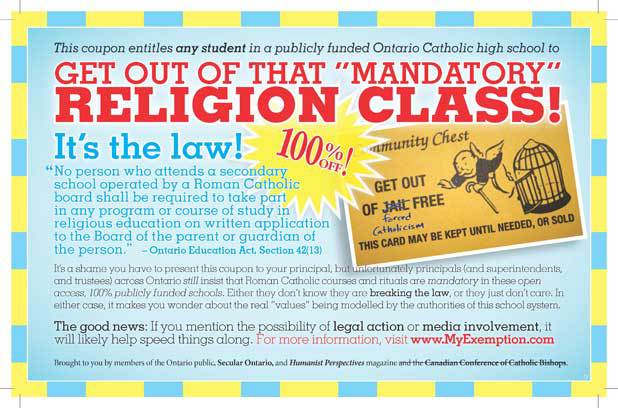 Members of a secular humanist group say they will be handing out “get out of jail” coupons to Catholic high school students advising them they have the right to opt out of religion classes.

An email from Secular Ontario said supporters “will be on public property in front of a selected publicly-funded Catholic secondary school to distribute coupons to students,” when classes finish in the afternoon.

The coupons, which look like something you’d get in a store or magazine, quote Section 42 (13) of the Ontario Education act saying no one attending a Catholic school board is required to take part in any courses or program of religious study if the parent or guardian of the student applies in writing.

The colourful coupons are bilingual and display a spoof Monopoly “Get out of Jail Free” card with the word jail crossed out and the words “forced Catholicism” written on top.

The group says that while students have the right to opt out, the classes are presented as mandatory and school boards hassle people who make the request.

“We see it as both a violation of the Education Act and the Charter of Rights and Freedoms,” said Henry Biessel, a retired university professor and member of Secular Ontario. Biessel said that when former Ontario Premier Bill Davis extended public funding to Catholic secondary schools it was on the understanding and written into law that anyone could attend and wouldn’t be compelled to participate in religious instruction.

Asked how the Ottawa Catholic School Board would deal with such a reques, the board sent Metro a written statement attributed to Julian Hanlon, the board’s director of education.

“We treat all requests for exemption for Religious Education courses in High School on a case-by-case basis,” the statement said.

Regarding how the board would respond to the protest, the statement said, “We did not know about the protest, but would not do anything about a peaceful protest off school property that did not impede the safe flow of student, staff and vehicles in and out of the school property.”

Secular Ontario said it would reveal the location of their protest on Thursday.

Parents of children attending a Catholic Elementary School should be advised
that there is a school principle who goes to court on behalf of one parent
to terminate the child's relationship with, the child's Father.

This particular principle also made fabricated allegations of criminal harassment
to the Ottawa Police and then, on denied under oath that he had ever made such a
complaint.

You see, the Ottawa police apparently promised him to remove his name from
the records and their redated copies did in fact remove his name but not
all his statements and the officer referring to him as the principle and there is
only one principle at that school.

If you are a father and happen to be the victim of Domestic Violence,
The Roman Catholic Elementary Schools of Ottawa are a dangerous place
especially when you have lawyers like Marguerite Lewis of the Children's Aid
Society of Ottawa who personally fabricates evidence to protect, the most violent
of mothers who admit assaulting children.

The Ottawa Police have a practice of arresting and charging MALE victims of domestic violence.

Rotten vile examples of humanity like Detective Peter Van Der Zander personally fabricates evidence to NOT charge women who attempt to strangle to death
the full time fathers of their children.

Ottawa is a cess pool of Criminals who are Police Officers and who work in the
Criminal Practice of Child Protection.

The only safe place for Fathers is anywhere outside the city of Ottawa and or Ontario.