Adolf Eichmann, the monstrous architect of the Holocaust, tried to convince the world he was ‘normal’ 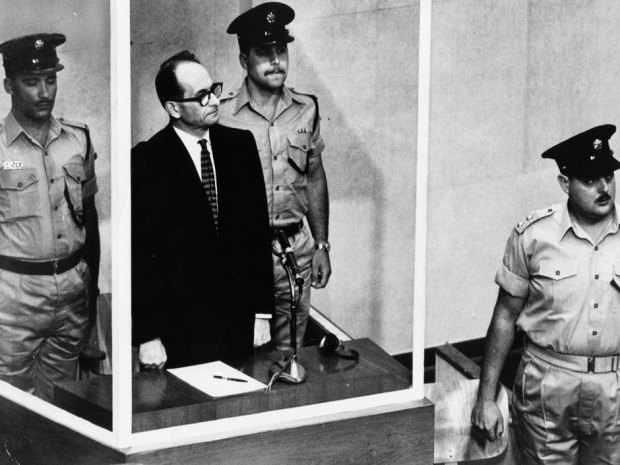 The picture of the balding, bespectacled and besuited middle-aged man standing in the dock is undoubtedly one of the most iconic images of the last century. The figure was Adolf Eichmann, the man often labelled the “Architect of the Holocaust”, and the time and the place was the Jerusalem District Court in 1961, where the 55-year-old was defending himself against 15 charges of war crimes, crimes against the Jewish people, and crimes against humanity.

The stakes for both Eichmann and Israel could not have been higher. While the German was on trial, the new state not only needed to show that it was capable of due process after the clearly illegal kidnapping of the former SS officer from the streets of Buenos Aires, but also that the Jews as a people could expect to see justice and revenge dispensed against those who had slaughtered them.

Because of the intense interest, the trial was televised and shown daily all over the world. The challenges of such a broadcast more than 50 years ago were immense, and they form the basis of a film called The Eichmann Show, being screened on BBC Two as part of a series to mark the 70th anniversary of the liberation of Auschwitz.

The producer of the trial’s coverage was Milton Fruchtman, who is played by the Sherlock star, Martin Freeman. In an interview in Radio Times, Freeman shared his thoughts about the trial and the man at its centre. “I think it teaches us that people who can be responsible for these terrible things aren’t monsters and don’t have two heads,” Freeman said. “They look, sound and often even think similarly to us, which is the scariest thing of all.”

We have heard this before, as the notion that Eichmann was normal is part of the received wisdom concerning the man. Freeman’s observation is undoubtedly rooted in the famous account of the trial by the political theorist Hannah Arendt, who memorably portrayed the man in the dock as a mere functionary, a man who enshrined, in her famous phrase, the “banality of evil”.

But the idea that Eichmann was a normal, banal bureaucrat who was just doing his job like any one of us is junk history.

It is high time that we dismissed the televised image of the halting figure in the bulletproof box as being representative of Eichmann the man, and the system of which he was a part.

Eichmann was not just some cog in an industrialised and depersonalised killing machine, he was a keen instigator of genocide, a zealous bigot who eagerly forged a career out of anti?Semitism and extermination. We only have to read the words he uttered well before his abduction and trial to realise that he loved the job that involved marshalling an entire people to its destruction. He remarked that when he died, he would “jump into my grave laughing, because the fact that I have the death of five million Jews on my conscience gives me extraordinary satisfaction”.

Eichmann did not just enjoy his work, he really believed in it. When he was hiding in Argentina after the war, he confided in a Dutch former SS man and journalist called Willem Sassen. “If we would have killed 10.3 million Jews, then I would be satisfied and would say, good, we annihilated an enemy,” he said. “I wasn’t only issued orders, otherwise I’d have been a moron, but rather I anticipated – I was an idealist.”

Rudolf Hoss, the commandant of Auschwitz, was an admirer. “Eichmann is 34 or 35 years old, a very active, adventurous man,” Hoss said in April 1946, while he was imprisoned. “He felt that this act against Jews was necessary and was fully convinced of its necessity and correctness, as I was.” And no less a figure than the head of the Gestapo, Heinrich Muller, was also a fan. “If we had 50 Eichmanns,” observed Muller, “we would have won the war.”

So how did this come about, this contrast between the perception of Eichmann and the reality of the man? The answer is that when he was on trial, Eichmann was playing a part. He knew that acting the role of the anonymous, dutiful bureaucrat would do him more favours than presenting his true self. Unfortunately, observers such as Arendt were taken in by this performance. 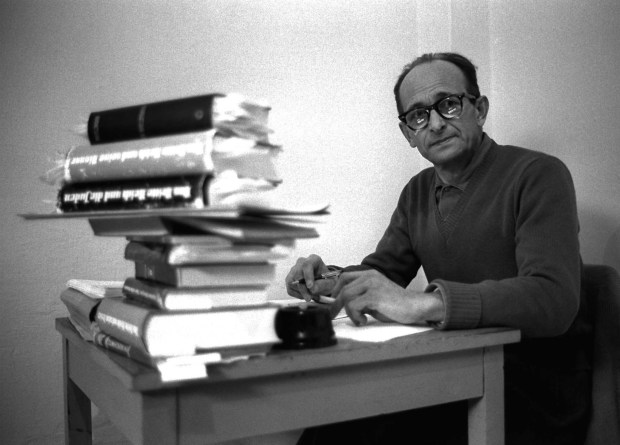 Adolf Eichmann [b March 19, 1906] was executed by hanging at a prison in Ramla on May 31, 1962 following rejection of two appeals against his conviction by an Israeli civilian court on 15 criminal charges for war crimes and crimes against humanity committed whilst serving as a Nazi SS officer during World War II.

There are many reasons why this error took hold. Perhaps the most important is that there was a strong need for people to believe that the enormity of genocide and anti?Semitism was rooted in something systemic, rather than being the product of a relatively small handful of crazed, but influential, individuals. When the Mossad found Eichmann living in a shack in a crummy part of Buenos Aires, the agents were appalled and even insulted that a man who had eradicated millions was not living in a huge, diabolical lair in the middle of the jungle. Somehow the size of the crime did not match up to the size of the man.

We can see this desire even today, when we look at what lies behind the recent murders of Jews in cities such as Paris and Marseille. Again, it is more palatable to suppose that the enemy is something large and systemic – in this instance, Islamism – rather than an increasing number of violent cranks who have perverted an ideology in an attempt to give their murderousness a sort of respectability.

Ultimately, we should realise that some people are not normal, and that they do not think like us. For want of a better word, the Eichmanns of this world are indeed monsters.

Guy Walters is the author of ’Hunting Evil: The Nazi War Criminals Who Escaped and the Hunt to Bring Them to Justice’

When it comes to Facists, the Nazies went after the Jewish population. Today, we have radical feminists who in Ontario support a program of Gender Superiority that promotes Domestic violence, murder and torture of fathers.

One of the nastiest examples of Criminal Fas.cism in Ontario is tht of a lawyer, for the Children's Aid Society of Ottawa

The Ottawa Children's Aid Society is a cess pool of those who promote violence and terror towards fathers and children who have direct lines to Judges who automatically "rubber stamp" any criminally corrupt request.