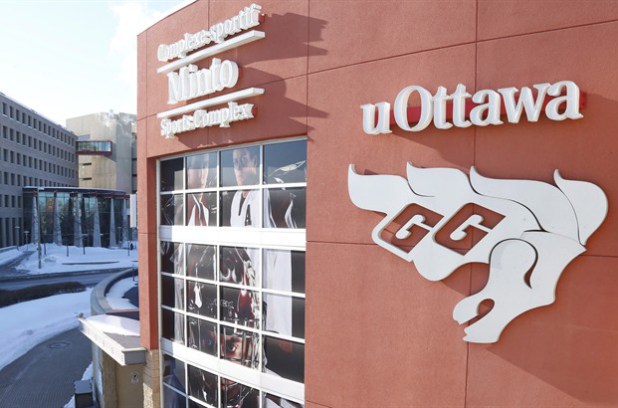 The Minto Sports Complex, home of the University of Ottawa Gee-Gees men's hockey team, is shown in Ottawa on Monday, March 3, 2014.

OTTAWA – The University of Ottawa is refusing to release a pair of investigative reports into misconduct that led to the suspension of its men’s hockey team, revealing for the first time that the probe was launched as part of a pre-emptive legal strategy.

As a result, the varsity players find themselves in the odd situation of having participated willingly in an investigation, overseen by a major law firm, that was aimed at protecting the university from possible lawsuits.

Police in Thunder Bay have charged two players with sexual assault in connection with an incident involving a 21-year-old woman during a road trip in February 2014. The team was initially suspended for the remainder of the 2013-14 season, and now the men’s hockey program has been put on hold through 2015-16.

The remaining 22 players are represented in a $6-million class-action lawsuit against the university that alleges their reputations were unnecessarily tarnished.

Lawrence Greenspon, the lawyer representing the players in the suit, said it’s “fundamentally wrong” to withhold the reasons behind the suspension.

“If you’re going to punish somebody for something that you said they did wrong, you have to at least disclose to them the basis for the punishment … it’s fundamental fairness to human beings,” Greenspon said in an interview.

“You’re clearly punishing these guys, you’re clearly affecting their lives, and you’re refusing to release the results of the investigation that they say is the basis for this punishment.”

Last June, university president Allan Rock told a news conference that independent investigator Steven Gaon had delivered a report. Rock said the university fired hockey coach Real Paiement based on the finding he did not inform school officials about the Thunder Bay incident.

In a subsequent letter to the Globe and Mail, Rock said the investigation also “disclosed widespread behaviour that was disreputable and unbecoming of representatives of uOttawa and suggested an unhealthy climate surrounding the team.”

Gaon was actually hired and directed by the law firm Norton Rose Fulbright Canada, which in turn had been retained by the university.

“Norton Rose Fulbright..retained an independent investigator to probe the facts underlying the allegations, in order to be in a position to give legal advice to the university on potential legal claims arising from the men’s hockey team matter,” the firm said in a submission to Ontario’s information commissioner in December.

The Canadian Press lodged a complaint with the commissioner’s office after the university refused to release any part of the investigation’s findings under the province’s freedom of information law.

In May, Gaon delivered not one, but two reports — one about allegations of sexual misconduct, and the other on excessive drinking. Those reports were also prepared “for use in giving legal advice,” according to university lawyer David Bolger.

The university said in a June press release that Gaon’s findings would not be published “to avoid any interference with the ongoing police investigation and out of respect for the university’s privacy obligations.”

But in its submissions to the information commissioner, the university cites as its primary concern the fact that the records are considered legal advice.

“The records should not be disclosed. They are protected by solicitor-client privilege, both at common law and under the statutory exemption created by the Act,” the university wrote.

Anne-Marie Roy, president of the University of Ottawa’s student federation, said it is in the interest of the wider university community to have the information released.

“How are we supposed to hold this university accountable for cases of sexual violence if there’s absolutely no transparency, if we don’t know what’s actually happening?” said Roy.

An edited copy of the sexual misconduct report was prepared by the university to see if there was an possibility of releasing them to The Canadian Press. But it concluded that “this would compromise the university’s ability to seek appropriate legal advice and be fully informed about its legal rights and responsibilities.”

It also worried that there would be a risk of the public deducing the identity of players, even with their names withheld.

The University of Ottawa released last summer an evaluation by two outside academics on the institution’s policies, practices and procedures.

The University of Ottawa is akin to the Ontario Headquarters of the Canadian Manhaters Association that promotes murder and violence against fathers.

The UOO is not alone. The Province of Ontario spends Billions of Dollars promoting violence and murder against fathers on the unspoken assumption that all men must be violent and child abusers.

In Ottawa the Storm Troopers of these fas,cist idea of Gender Superiority and Gender Cleansing are the Ottawa Police and their similar collective group of psychopaths the Children's Aid Society of Ottawa.

At the Ottawa Police you will find "Rotten Cops" like
Detective Peter Van Der Zander who fabricates evidence
not to charge the most violent of women.

His counterpart at the CAS is CAS Lawyer Marguerite Lewis who personally fabricates evidence to assist violent female child abusers.

And down at 161 Elgin Street Corrupt Crown attorney's like
Tara Dobec Stay Charges against the most violent of females
when another crown approved charges apparently on the request of the CAS.

If you think that's bad, there is even worse examples of those who abuse their
power and fabricate evidence personally as judges and that's another story
you can read about at