The major breweries’ political donations are small beer when it comes to influencing the future of the private Beer Store monopoly, warns Premier Kathleen Wynne.

How much do you know about the Beer Store?

By: Robert Benzie Queen's Park Bureau Chief, Published on Thu Jan 22 2015
The major breweries’ hefty political donations are small beer when it comes to influencing the future of the private Beer Store monopoly, warns Premier Kathleen Wynne.
“It cannot be a consideration. It really can’t,” Wynne said in an interview Tuesday.
“We’ve got to make the right decisions for the people of the province. We absolutely have to.”
Her salvo comes after the Star revealed last month that more than $525,000 was donated to Wynne’s Liberals, the Progressive Conservatives and the New Democrats by the Beer Store, its offshore owners, and the union representing brewery employees in 2013 and 2014.
“The fact is that fundraising happens across all parties and we all are involved in that part of the democratic process and there are groups that give to one and not the other and they give at some time and not other times — and I can’t control that,” the premier said.
“All I can do is run our government the way we can with the most integrity possible.”
Wynne emphasized that Ontario consumers should expect a rethink of the government’s relationship with the 448-outlet Beer Store owned by the foreign parent companies of Labatt, Molson and Sleeman. 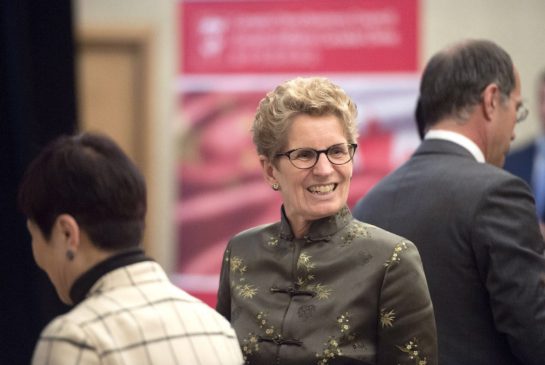 “We’re going to make changes, there’s no doubt about it. We’re going to have these initiatives in the (spring) budget,” she said, noting former TD Bank CEO Ed Clark is advising the government on how to proceed.
“Ed Clark has talked to the beer companies. He’s very much been engaged with them. It’s not about whether we’re going to make changes, it’s about exactly what those are going to be,” she said.
“The whole point of this exercise with Ed Clark is to maximize the value of the assets. The fact is he’s made it clear that he sees this monopoly as having value.”
Wynne played down the Beer Store’s recent olive branch to sell a small share in the chain to Ontario-based craft brewers as just “grist for the mill.”
“For me there are two things: how do we extract the value from the monopoly — Ed Clark has talked about that in his report; and, secondly, how do we make sure that all breweries in Ontario have access as they were originally meant to under the Brewers Retail configuration?”
Jeff Newton, president of Canada’s National Brewers, said “we’ve had productive discussions with government and brewers about the big changes we’ve announced to open up ownership of the Beer Store to all Ontario brewers.”
“The government has recognized the Beer Store is a highly efficient system that has benefits for consumers. We look forward more discussions that will help retain those benefits,” said Newton.
Queen’s Park has long been under the influence of Big Beer.
According to Elections Ontario, the multinational brewers donated at least $385,000 to the Liberals, Tories, and New Democrats over the last two years.
Along with that, the United Food and Commercial Workers (UFCW), which represents thousands of unionized Beer Store employees and brewery workers, contributed another $140,000 to both the Grits and the NDP.

It's enough to make you quaff on your beer.
Kathleen Wynne has been and is a long time
supporter of Liberal Patronage, including the
Billions of Dollars Ontario takes from Tax-Payers
and gives it, without tender, without any accountability
to Ontario's Criminal Cartel of Children's Aid Societies of Ontario
that lawyers refer to as "The Gestapo".

The lawyers who work for the gestapo are some of
the scariest personalities you can ever meet.

They lack of empathy and propensity to engage in
Domestic Terrorism is what makes them attractive
to the Political masters as Judges.

Not that she actually snatches babies out of the
street but, it's a pretty bad nick name to earn.

Perhaps the legal world should call her the
Terminatrix, for ending children's relationships
with Male victims of domestic violence who were
full time fathers until, the Terminatrix,
Fabricated evidence of admissions of being
a child and wife abuser, a claim she knew to be false.

That, costs, Ontario billions of Dollars and the
patron Saint of Ontario's Gestapo, is
Kathleen Wynne.

Kathleen Wynne cares more about the money laundry that goes from the Feds, to the Ontario Government, to it's largest Criminal Cartel called the Children's Aid Societies of Ontario, who without tender, without accountability, engage in terrorism that makes ever man in Ontario
afraid to call the police, if he should be assaulted by a woman.

Kathleen Wynne has a dream, where only women are equal as parents, and fathers are only permitted the legal right to be Cperm Donors and wealth providers to women who, are allowed to engage in the
Swedish definition of rape, unprotected against pregnancy sex, or sex under false pretenses of not being for the real purpose of creating a child who will never see their father.

Kathleen Wynne holds dear the principle of Promoting Hatred and Violence towards Fathers, who have no legal rights in the Province of Ontario.

The sad, sick reality is that not a single Politician in Ontario is willing to step up to the plate and bring an end to the
Fascist Ontario Government's ideas of Gender Superiority that results in
99% of Ontario Children in custody matters being given to mothers,
even when they are the most violent and least suitable and
an unacceptable risk of harm to even a cat.

Kathleen Wynne is a part of the Extreme Feminist cult that has resulted in Ontario, of escalating Billions of Dollars spent, on the Fas.cist
Gender Superiority Program.

Take the Ottawa Police Budget of 400 Million Dollars, and 75% of that goes to the Fas.cist Gender Cleansing Operation called Partner Assault that
amazingly has 90% of those being charged of the Male Gender.

That means, MOST of those charged were in fact, Male Victims of Domestic Violence.

The police knew and know that charging a male victim keeps Feminists like Wynne happy by telling them what they want to hear and not reality.

The Police know that their probability of a conviction is most of the time remote.

It's that kind of Corrupt Criminal Fac.sist ideas that result in 99% of Ontario Children being given to mothers.

Ottawa and Ontario are the wrong place to be a male victim
of domestic Violence.

Thanks to Kathleen Wynne who does not give a dam about
the Corrupt Evidence Fabricating cops like Det. Peter Van Der Zander
of the Ottawa Police.