The murder of Zahra Abdille and her sons was a "homicide waiting to happen," the head of the Domestic Violence Death Review Committee says. 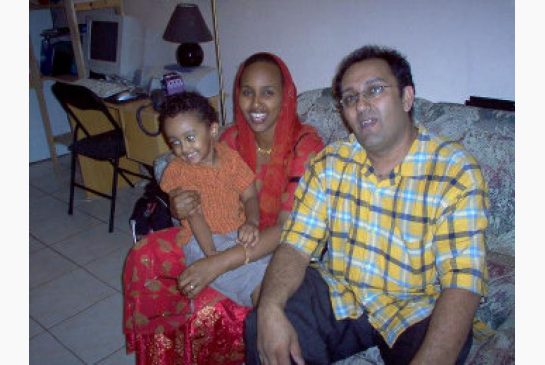 Public health nurse Zahra Abdille holds her eldest son Faris while sitting beside her husband, Yusuf Abdille, believed to have murdered his family before jumping off a bridge near their East York home.

Zahra Abdille and her two young sons officially became a statistic on Nov. 29, when they were added to a long list of preventable domestic homicides in Ontario, according to the chair of the Domestic Violence Death Review Committee.

Every year for more than a decade, the committee has made recommendations to help prevent domestic homicide — some repeated annually — but it has no power to put them in place.

Critics are calling for the committee to be given authority to enforce these recommendations and stop women being murdered at the hands of their abusive partners.

Abdille, a 43-year-old Toronto Public Health nurse, was slain alongside her two young sons in their East York home two months ago; her husband, suspected in the killing, died after plummeting off a nearby bridge.

The Abdille family tragedy could be identified “as a homicide waiting to happen,” the death review committee’s chair, Dr. William Lucas, told the Star.

The case is still being investigated by police and is likely to be reviewed by the committee next year, but Lucas said, based on media accounts, a number of risk factors indicate that “her death and the children’s were clearly preventable.”

Up to 80 per cent of all domestic homicides could be prevented if the committee’s recommendations were properly enforced, said Dr. Peter Jaffe, academic director of the University of Western Ontario’s centre for research and education on violence against women and children.

Jaffe wants to see routine audits carried out to assess whether the committee’s recommendations are actually being implemented.“These are life and death issues. People are falling through the cracks and someone should be taking charge.”

The committee, made up of coroners, health care professionals, Crown attorneys, police, counsellors and advocates, has called for this before.

In its 2007 report, the committee asked the government to create an inter-ministerial body to audit all responses to its recommendations, because, it said, they were “repeating themselves.”

Following the committee's 2007 call for action, the government created the Domestic Violence Advisory Council, which in 2009 also requested that the committee's recommendations be evaluated in a public report.

The government never did act on these recommendations, a spokeswoman from the Ontario Women's Directorate confirmed. But all ministries now report to the chief coroner on actions taken in response to the committee's annual reports, she said.

The 1996 murder of Arlene May was the catalyst for creating the death review committee, which is overseen by the Office of the Chief Coroner.

May told her children to go to the corner store, then sat on her bed and cried before her ex-boyfriend shot her dead, then turned the gun on himself, according to an inquest into her death. That inquest produced 213 recommendations, including the birth of the committee.

In its first report 11 years ago, it said Ontario’s broken system was failing too many women. It found that victims of domestic violence — stabbed, beaten, strangled or poisoned — had suffered abuse for years while relatives, physicians and professionals in the criminal justice system missed the warning signs.

The committee made 29 recommendations to prevent domestic homicide, including raising public awareness, specialized training for people who work with victims, and better communication between agencies.

Despite significant improvements, the committee is still making the same recommendations today.

Had its ideas been put in place in 2004, there would have been opportunities to prevent the deaths of hundreds of women and children, including the Abdille family, Lucas said.

Abdille fled to a safe house with her two young sons in July 2013. During her three-week stay at Dr. Roz’s Healing Place, she tried to get interim custody of her sons through an emergency court order, which would have also imposed a restraining order against her husband, but she was turned away because she could not produce certain documents, such as bank statements and school fees, according to her file at the shelter.

Lucas, who is Ontario’s interim deputy chief coroner for inquests, said Abdille “did all the right things” by calling out for help. “But, the bottom line is there are still huge gaps in the system for people to fall through the cracks,” he said.

The recommendations made by the committee back in 2004 include having social services take a more hands-on approach with victims so they don’t have to navigate the system alone, and employing assessment tools to identify “high risk” cases. Both might have helped to prevent Abdille’s death.

Every year, the committee reviews on average 16 cases, although that’s been rising, with a high of 33 in 2011.

After 13 years, and reviewing more than 250 deaths, it is frustrating the committee still has no power to force agencies to act, said Pamela Cross, legal director of Luke’s Place, a support and resources centre for abused women.

If the committee doesn’t get more teeth, it will be forced to continue to making the same suggestions, she said. “We have the information we need to prevent these homicides, but we are failing to do that, and women and children are dying.”

Lucas, who has chaired the committee since 2006, said he has witnessed a “tremendous” shift in the way the criminal justice system approaches domestic violence, including the birth of dedicated police investigative units. The government has also increased funding, trained thousands of front-line professionals and launched public education campaigns.

“There has been a lot of positive change, but we are climbing a mountain here and we still have a long way to go,” he said.

In a report released by the committee last year, it said police, social support services, the courts and other agencies often miss opportunities to intervene at an earlier stage. The report said “consistent gaps” still exist in awareness, education and training around domestic violence in Ontario.

So, who failed the Abdille family?

“We all did. Collectively, as a society,” Lucas said.

Recommendations made by the committee in 2004:

In Ottawa Violent women are rarely charged while the male victims end up being maliciously charged and prosecuted by the Ottawa police where the vile underbelly of the Ottawa Police like Det. Peter Van Der Zander actually fabricate evidence to NOT charge violent women.