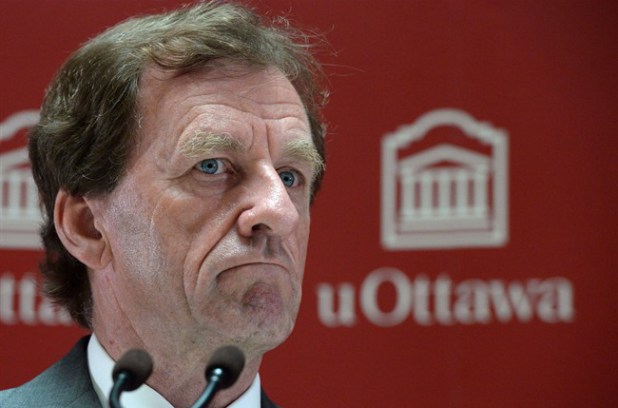 OTTAWA – The University of Ottawa says it wants to set itself up as a “beacon” for other Canadian institutions who are dealing with the issue of sexual violence, in the wake of its own scandal around members of the men’s hockey team.

The university released a task force report Thursday on respect and equality on its campus, along with a series of 11 recommendations that it has committed to fulfilling. Two former students were recently charged by Thunder Bay police in connection with an alleged assault that occurred during a hockey team trip nearly a year ago.

President Allan Rock hinted at the recent high-profile harassment and assault allegations levelled at individuals at Dalhousie University, the CBC and on Parliament Hill.

“This past year alone we’ve seen the issue arise on a number of campuses in Canada and the United States, as well as in some of our venerable national institutions,” Rock told reporters.

“As for the University of Ottawa, our focus of course must be right here in our own university community. And by doing all we can on our own campus, to make the environment safe, respectful and free of sexual violence, we can become a beacon. We can create an example for others to follow.”

The university report included an on-line survey of 1,088 students, more than two-thirds of whom were women. Sixteen per cent of the women and eight per cent of the men said they had experienced at least one incident of sexual violence.

Forty-four per cent of the female respondents said they had been touched, hugged or kissed against their will, with another 32 per cent saying they had been asked on a date or a sexual encounter by someone who “wouldn’t take no for an answer.”

The task force was particularly concerned with “harmful beliefs” that surfaced in the survey results. For example, 38 per cent of men surveyed agreed or felt neutral about a statement that women who wore low-cut tops or short skirts were sending mixed messages.

The report recommends the university adopt a statement of values on respect and equality, to be promoted by different bodies on campus. It’s also urging the school to institute mandatory training on sexual violence to all senior administrators, beginning in September.

The task force also recommended a new sexual violence policy and protocol that would apply to everyone on campus — not just students. Some who participated in the report complained that not enough was being done about professors who harass support staff and students.

“The question is, what do you do about it? We’re doing something about it, something meaningful. I’m happy to have our reputation determined from that perspective.”

The university’s approach to the reputations of the members of the men’s hockey team, meanwhile, is the subject of litigation. Twenty-two former players are represented by a class-action lawsuit, which argues the school has done nothing to clear the names of those who had no involvement in the alleged assault.

The issue of fairness for the accused has also been a major aspect of the debate around the harassment allegations on Parliament Hill and at Dalhousie University.

The Canadian Press reported last week that the University of Ottawa’s internal investigation of the allegations was actually part of a legal strategy designed to protect it against future lawsuits.

Rock told reporters he didn’t know whether the hockey players interviewed by investigator Steven Gaon were told that he was working for the law firm hired to represent the university’s interests.

Gaon’s ensuing reports were later used as the basis for the firing of coach Real Paiement, and the suspension of the hockey program the 2015-16 season.

“I can tell you that the players were told the interviews were voluntary, and that was the basis on which they were conducted,” said Rock.

The task force’s survey of 1,088 students was conducted after offering an initial random sample of 5,000 the chance of winning three prizes of a $500 tuition break.

The polling industry’s professional body says online surveys cannot be assigned a margin of error as they are not a random sample and don’t necessarily represent the whole population.

Alan Rock represents the University of Ottawa, which has a reputation of promoting murder and violence by women towards men.

Alan Rock as a former government minister in a Government that promoted Ontario's Fascist ideas of Gender Superiority that have promoted murder and violence by women towards men.

Any male victim of domestic violence has a better chance of being arrested and charged than the female perpetrator.

The promotion of murder, violence and abuse towards fathers is not unique to the University of Ottawa.

The Ottawa Police train their officers officially and unofficially to promote that violence by women towards men.

Its called "old school policing" it also makes the Ottawa Police a Fascist Criminal Organization that is part of the Extreme Feminist doctrine of "Gender Superiority"
that results in 99% of children being placed with mothers even when they are the most violent.

Recently 3 Ottawa Police Officers all Fabricated Evidence Cst. Van T. Ngyen #952, Cst. Samuel W. Smith # 880 and worst of all, Detective Van Der Zander #1639, ALL Fabricated Evidence to protect what they knew was an extremely violent woman who attempted to strangle to death a full time father.

When Full Time Fathers call the Ottawa Police odds are they will be yet another victim of a malicious prosecution by Fascist Corrupt Police and Crown Attorneys who apply Fascist Gender Superiority ideas rather than anything that might be called Fundamental Justice.

If you meet any of these vile examples of humanity.

Ask them to resign.