Ronny Munoz-Hernandez, 26, is awaiting sentencing for manslaughter in the death of his girlfriend's 5-month-old son. 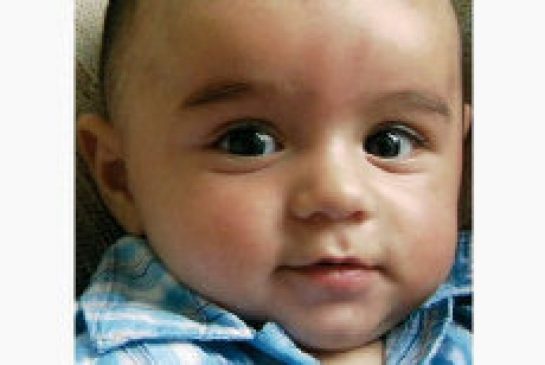 Adriel DaSilva Garcia died after being cared for by his mother's boyfriend in the fall of 2010. Ronny Munoz-Hernandez has been convicted of manslaughter in his death.

A photograph of smiling, chubby-cheeked five-month-old Adriel DaSilva Garcia remained on courtroom screens Friday afternoon as the man responsible for his death asked for forgiveness.

Ronny Munoz-Hernandez, 26, was convicted of manslaughter for causing his girlfriend’s son Adriel a severe brain injury that left him in a coma for nine weeks before he died.

Defence lawyer Paula Rochman asked for a sentence of between three and six years, noting that with credit for pre-trial custody Munoz-Hernandez has already been incarcerated for five years and four months.

Adriel’s mother Jessica DaSilva described the nightmare of seeing her son lying in a hospital bed in her victim impact statement to the court.

“Seeing my child with a piece of his skull removed, stitches from ear to ear,” she said, pausing to contain her tears. “Bruises throughout his body, eyes shut, no movement, hearing no cries, no laughs and not being able to hold him.”

She remains plagued with two questions.

What exactly happened on Sept. 11, 2010 and why would anyone harm a child?

After a trial last year ended with the jury unable to come to a unanimous verdict (Munoz-Hernandez was charged with second-degree murder) and a lengthy decision by a judge released earlier this month, DaSilva still has no answers.

According to Garton’s judgment, DaSilva, 19 at the time, asked Munoz-Hernandez to babysit Adriel while she attended a wedding until the early hours of the following morning — an act of “extremely bad judgment.”

Munoz-Hernandez left the baby alone three times that day, leaving first to get a manicure and buy curtains, then to go to the mall and look at cellphone plans and lastly to buy marijuana with two friends.

At some point that day he caused Adriel to be hurt so seriously that he was unresponsive the next morning.

In his testimony at trial, Munoz-Hernandez claimed he accidentally dropped Adriel in the bathtub when he slipped taking a shower. In her judgment, Garton found he was lying.

What happened to Adriel was a “tragedy,” said Munoz-Hernandez through a Spanish translator. “I recognize, on the day, I did make a lot of bad decisions … with all my heart and with all my soul I do feel bad for what happened.”

Rourke said that Munoz-Hernandez showed a “callous indifference” to the baby he had bought clothes for and suggested should take his last name.

“What an extraordinary breach of trust,” she said.

Rochman argued Munoz-Hernandez may not have known how serious the situation was, a conclusion Garton reached in finding that he did not have the intent to kill or seriously harm Adriel.

Garton will deliver her sentence on Feb. 23.