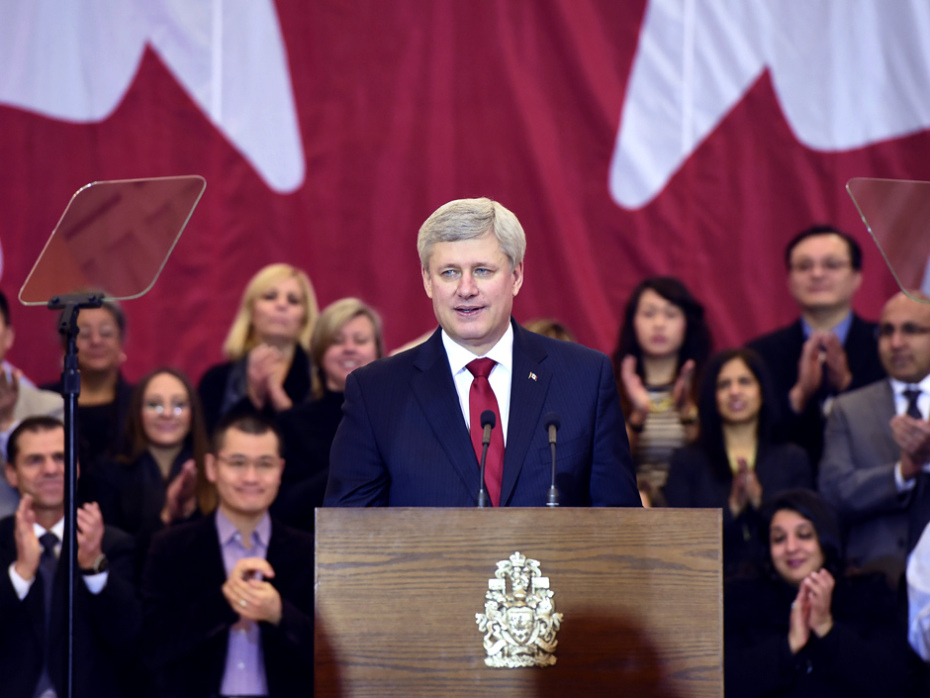 This is not a government that has inspired confidence in its respect for the democratic institutions of this country.

The introduction of its new Anti-Terror legislation is a case in point – the whole process happened hundreds of miles from Parliament during Question Period; much of the media briefing took place without the legislation being made available to journalists.

Does it deserve to be given the benefit of the doubt when it introduces a dramatic extension of the surveillance powers of the state?

This is important stuff – the crucial balance between freedom and security. As Benjamin Franklin noted, a state that surrenders the former for the latter will not have, nor deserve, either one.

Stephen Harper said that the new legislation will “strengthen democracy and our traditions of tolerance.” He said judicial oversight will protect the rights of Canadians, “the rights that jihadists seek to destroy”.

“Not now, not ever will we allow [our] rights and freedoms be taken from us,” the Prime Minister said.

This is a powerful piece of legislation, with the potential to disrupt the balance that has served Canadians remarkably well down the years.

The new package has five parts – two of which, in particular, will be scrutinized by civil libertarians. One is a provision that makes it easier for police to detain suspected terrorists; the second, a measure that enhances the powers of CSIS, Canada’s spy agency, to allow it to disrupt threats. Currently, CSIS does not have the legal mandate to take action concerning threats.

(In addition, the bill criminalizes advocacy and promotion of terrorism; gives more powers to prevent travel by air for he purposes of engaging in terrorism; makes it easier for government departments to share national security information; and, eases the use of classified information in immigration proceedings.)

Peter MacKay, the justice minister, called the response “necessary and proportionate”. But the legitimate fear among civil rights advocates is that, without sufficient safeguards and oversight, we could see the suspension of habeus corpus and a spy agency running amok.

Under the law’s recognizance with conditions measure, the threshold required for a judge to authorize a detention will be lowered from reasonable grounds that a terrorism activity “WILL be carried out” to “MAY be carried out”. In addition, it replaces the current requirement that arrest is “NECESSARY to prevent” the carrying out of a terrorist activity, to “LIKELY to prevent”.

Those arrested can now be held for up to seven days, from three previously, and the bill imposes a peace bond on those who “may commit” a terrorism offence of up to five years, requiring the individual to surrender their passport.

That is a major shift in the tectonics of Canadian criminal justice. It will be up to the government in the coming days to justify the changes. The prevention powers have been in place since the 9/11 attacks but have never been used. The claim is that lowering the evidentiary bar, it will allow police to intervene earlier and more often.

The government’s case will be bolstered by the case of Martin Couture Rouleau, who ran his car into two members of the Canadian armed forces last October, killing one. RCMP say they identified Mr. Couture Rouleau as a high risk traveller and his passport was confiscated, yet when they presented evidence to the Crown, they were told they did not have a strong enough case to detain him.

But, while judicial oversight of the detention process remains in place, the definition of arrest on “reasonable grounds that another person MAY commit a terrorism offence” is remarkably vague. The public appears to be onside with measures to strengthen the ability of law enforcement to protect Canadians. But I suspect there will be little tolerance for widespread and indiscriminate detentions, which will surely result in the radicalization of even more young Muslims. Friends who served with the British Army in Northern Ireland estimate that the rounding up of suspected terrorists under the internment program extended the Troubles by 20 years.

The CSIS changes are sweeping, handing the spy agency many functions that previously had to be carried out by the police. The briefing documents provided by the government offered up an example of a 21-year-old Canadian citizen, who has become disenchanted with his home life, has been viewing Youtube videos of radical imams and acquired al-Qaeda literature. Individuals in his local mosque have advised CSIS he is planning to travel abroad to engage in terrorist activity. Currently, CSIS can investigate but it is forced to hand on its findings to the RCMP for the Mounties to launch their own investigation. Under the new bill, CSIS could meet with the individual to advise him they know what he is planning to do and advise him on the consequences of further action.

Canada remains remarkably resilient to terrorism, largely because the fairness of its justice system and the robustness of its institutions mean its citizens are less likely to become disaffected to the point of armed insurrection

This sounds fair enough – the agency is authorized only to take “proportional” measures to disrupt threats and would need a court warrant whenever threat disruption measures contravene Charter rights. But who is watching the spies to make sure they comply with their mandate? The Security Intelligence Review Committee is charged with examining the performance of CSIS but SIRC is not without its own critics. This, remember, is the organization that used to be headed by alleged fraudster, Arthur Porter.

There have been calls in the past to have CSIS policed by an all-party parliamentary committee of MPs to allay fears of sinister behaviour. A beefed up oversight function should have accompanied the expansion of CSIS’s powers.

Canada remains remarkably resilient to terrorism, largely because the fairness of its justice system and the robustness of its institutions mean its citizens are less likely to become disaffected to the point of armed insurrection.

The security services are the last line in our defences. Whether handing them enhanced powers will strengthen our democracy, as the Prime Minister maintains, will depend entirely on how they are utilized.

Harper is playing the boring old "law and order game" it continuously increase the Governments control and surveillance of its citizens under the subterfuge of security measures.

Ontario spends Billions of Dollars sponsoring Domestic Terrorism that has destroyed the Rule of Law, democracy and further entrenched a Fas.cist policy of Gender Superiority.

Ontario's lawyers call the Children's Aid Societies of Ontario "The Gestapo", they operate as domestic terrorists using Billions of Dollars of Federal Money to leave a multi-generational trail of destroyed lives.

A classic example is that of Ottawa Lawyer Marguerite Lewis, perhaps Ontario's worst Domestic Terrorist with an nickname "The Baby-Snatcher".

This vile terrorist, fabricates evidence to abuse children, to terrorize the victims of Ontario's Fas.cist Program of gender apartheid that promotes violence and murder of fathers by women.

Marguerite Isobel Lewis is a lawyer for the Children's Aid Society , a member of Ontario's Criminal Cartel of 54 unaccountable private corporations who have over the years gained almost total control of the Judicial system, by installing their own judges who personally fabricate evidence to promote violence and murder towards children and fathers.

This article and Harper relies upon the delusional idea that the Judiciary of Canada can be trusted.

It's time for a reality check.

Ontario Superior Court is riddled with the most corrupt criminals who have been installed as Judges for the sole purpose of entrenching government powers, stifling any descent and or promoting fas.cist ideals.

Ontario over the decades has increasingly appointed those stooges of the government who then select, at "arms length" the Judiciary from those who have the worst personality disorders with the worst ethics and who are the least suitable personalities to be given absolute power.

These vile examples of humanity come with the equivalent of long  criminal records as former lawyers for Ontario's largest Criminal Cartel the Children's Aid Society of Ontario whose lawyers are experts at Domestic Terrorism.

If the conservatives really gave a dam about terrorism, they would deal with the worst Domestic Terrorists like Marguerite Lewis but no, word is that
Marguerite Lewis is about to be yet another professional child abuser "anointed" a judge of the cess pool of injustice called the Superior Court of Ontario.

She is willing to Fabricate Evidence in front of Judges like the Dis-Honourable
Timothy Minnema who as a former CAS lawyer turns a deliberate blind eye to the most flagrant examples of fabrication of evidence in front of him while, also Fabricating evidence personally to suit the Fas.cist ideas of the Ontario Government that result in 99% of children being placed with mothers.