A new Forum Research poll has the federal Conservatives and Liberals in a statistical tie. 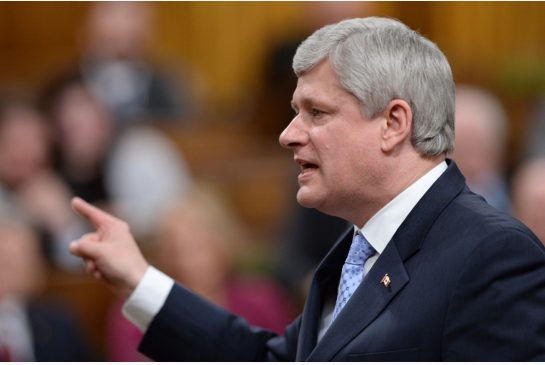 Stephen Harper continues to benefit from the U.S.-led coalition’s war against Islamic State fighters in Syria and Iraq, which is proving to be popular with Canadian voters, says Forum Research president Lorne Bozinoff.

The federal Conservatives and Liberals are locked in a tie in voter support, according to a new Forum Research poll.

The poll, conducted Wednesday and Thursday, shows the Conservatives have 35 per cent voter support and the Liberals 34 per cent — a tie when the poll’s margin of error is factored in.

The opposition New Democrats are at 20 per cent.

“Nothing much in particular has happened recently, the prime minister is no more popular, the other leaders are no less so, yet the incremental decline in the Liberal lead has continued to the point where it is no longer a lead, for the first time in our polling since Justin Trudeau became leader,” Forum Research president Lorne Bozinoff said in a statement.

Stephen Harper continues to benefit from the U.S.-led coalition’s war against extremist Islamic State (ISIS) fighters in Syria and Iraq, which is proving to be popular with Canadian voters — and that’s a hard act to follow, Bozinoff added.

Based on seat distribution in the Commons, which will grow to 338 for the October election, Forum says the polling results indicate the Conservatives would win a slim minority —145 seats to 125 for the Liberals and 61 for the NDP.

The poll randomly questioned 1,382 Canadian voters using an interactive voice response telephone survey. The results are considered accurate plus or minus 3 percentage points, 19 times out of 20.

There is a sickening lack of difference between the Conservatives and Liberals in Federal Politics. Only the Conservatives in Ontario have expressed any real outrage about the Billion Dollar Criminal Cartel called the Children's Aid Societies of Ontario that has somehow over the decades placed itself in a position of Absolute Power, "As Powerful as God" and with Liberal and NDP politicians too cowardly to say a word about
this Fas.cist Organization that promotes violence and abuse of children and fathers.

Ontario appoints the vilest examples of humanity to be judges and it's this group of Fas.cist promoters of Gender Superiority who should be first targeted by the Federal Government as Domestic Terrorists.