Tories spoiling for fight that's not happening on terror law 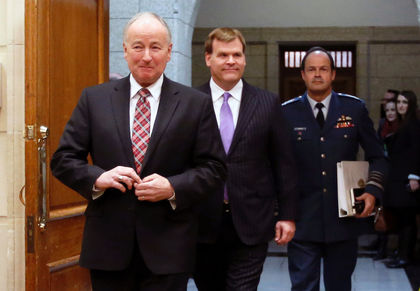 OTTAWA - Prime Minister Stephen Harper and the federal Conservatives may be spoiling for a fight with their political opponents over new tough-on-terrorism legislation but, for the most part, New Democrats and Liberals remained muted Monday in their criticism of new anti-terror laws.

Only Elizabeth May, the Green Party MP and leader, voiced serious concerns about Bill C-51, the anti-terrorism legislation unveiled Friday by Harper.

"I have problems with the powers and the sweeping vague definitions," May said on Twitter.

Among other things, the proposed law would give a new mandate to Canada's spy service, the Canadian Security Intelligence Service (CSIS), to "disrupt" terrorist activity in Canada using a broad range of powers if the spies get a judicial warrant.

But the legislation does not provide any new oversight powers for the spy agency. Oversight of CSIS would continue to rest with the Security Intelligence Review Committee, a group of civilians appointed by the government of the day.

New Democrats and Liberals want additional oversight of CSIS through a body made up of parliamentarians.

That seems to be their biggest -- and only -- beef with the bill at this point.

"There are some things that at first blush do seem to be helpful," NDP Leader Thomas Mulcair told reporters outside the House of Commons. "Criminalizing incitement to commit a terrorist act, frankly, is a good idea, and it's not something that could have been caught by other provisions of the law, but what we've been saying for some time is if you're going to give enhanced powers, you have to have enhanced oversight. That's a given."

The Liberals, too, pressed the government in a similar manner.

"Every single one of our allies with whom we share intelligence has a parliamentary or congressional oversight mechanism," Liberal MP Ralph Goodale said in the House of Commons. "If it is right for the U.S., the U.K., New Zealand and Australia, why is it wrong for Canada."

The Conservatives, though, didn't seem to want to accept the opposition's olive branch and were in attack mode.

"Under the leadership of this government, we put forward the Combating Terrorism Act more than a year ago with no support from the NDP," Public Safety Minister Steven Blaney told the House of Commons.

Neither party would say if they will vote for or against the proposed bill when they have the opportunity.

The proposed law would also would lower the threshold of what's required for police to make an arrest in a terror case.

Previously an arrest could be made only if a terror act "will be" carried out, but C-51 allows police to arrest a suspect if an attack "may be" about to happen.

The Conservatives are exploiting the most vulnerable, the brainless red necks who "trust government" when concerned citizens of all political ideas need to be warned that this legislation will be the straw that breaks the camels back when it comes to abuses of government.

The classic example is that of the Children's Aid Societies of Ontario who receive Billions to operate a Criminal Cartel that operates on sheer terror with impunity, immunity, censorship, private courts with private judges most of whom are former lawyers for the same Criminal Cartel of terrorists.

Watch the movie "Powerful as God" at blakout.ca or visit the wanted pages at
ottawa mens centre