Magna Carta: A powerful symbol of justice triumphing over tyranny 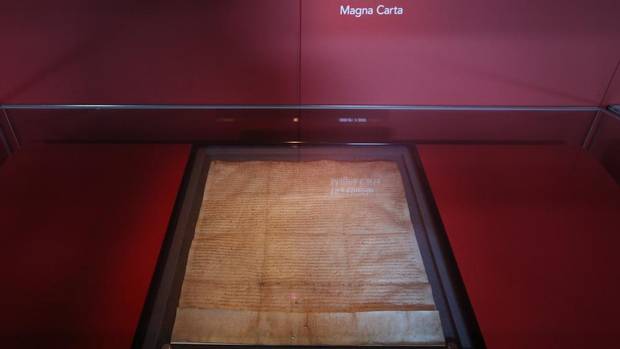 It has been called democracy’s birth certificate, but 800 years later, most of Magna Carta is as outdated as the Latin it is written in, with rules on how to repay debts owed to Jewish moneylenders and what widths to make dyed cloth. Still, the charter remains a powerful symbol of justice triumphing over tyranny, especially in our time, when the concepts of freedom and fairness are in constant flux.

A document for the ages

King John of England’s acceptance of Magna Carta, or Great Charter, marked the first time an English monarch had ever consented to written limits on power drafted by his subjects. It laid the foundation for the common-law system in the English-speaking world and informs the Canadian Charter of Rights and Freedoms (1982), the U.S. Bill of Rights (1791) and the United Nations’ Universal Declaration of Human Rights (1948).

The succession of kings who ruled England after the 1066 Norman Conquest allowed the nobility a degree of autonomy and protection from arbitrary punishment. John’s father, Henry II, and brother, Richard I (the Lionheart), spent a lot of time overseas defending their French lands and fighting the Crusades. Their absences increased the independence of the English nobility. John, however, who was king 1199-1216 and spent much of his reign in England, imposed new taxes to fund continental wars and ignored the many accepted rights of the barons. He is portrayed as selfish and cruel in countless Robin Hood movies.

In 1215, after King Philip II of France imposed a humiliating peace treaty on England, a weakened King John again demanded more money from the barons. The usual response would be for the barons to back a rival to the throne. But since John’s eldest son, the future Henry III, was only eight years old and could not replace John within the Royal Family, the barons decided to codify their privileges in a charter. John was finally compelled to affix his seal to Magna Carta on June 15, 1215, at Runnymede, west of London.

The charter also contained clauses guaranteeing the freedom of the church and the city of London, which remain active statutes in Britain.

Within months of King John agreeing to the charter at Runnymede, both sides abandoned it. John appealed to Pope Innocent III to release him from the terms, and the barons returned to their traditional method of dealing with monarchs they did not like – supporting a rival claimant to the throne. The barons sent a delegation to the future King Louis VIII of France inviting him to invade England and claim the throne.

John’s death in 1216 allowed Magna Carta to survive and develop. The barons withdrew their support for Louis’s invasion and rallied around John’s son, Henry III. The new king’s lengthy time as a child-monarch allowed the barons to assume a greater role in governance and refine Magna Carta’s codified ideas.

In 1217, the Charter of the Forest (Carta de Foresta), which ended the arbitrary “evil customs” in forest law mentioned in Magna Carta, was ratified. Then, after Henry III came of age in 1227, he finally agreed to accept Magna Carta in exchange for taxes on the clergy and on land.

In the lead-up to Magna Carta’s 800th anniversary, four surviving original copies from 1215 have been brought together for the first time at The British Library in London. The library announced on Monday that 1,215 people have won the opportunity to visit the display out of a pool of more than 40,000 people from around the world who entered a public ballot.

It is believed that King John had his clerks make between 13 and more than 30 copies for distribution across his kingdom. Hundreds more were later produced throughout the medieval era. Today, only four copies from that first group survive: Two are kept at the British Library, one at Lincoln Cathedral in eastern England and one at Salisbury Cathedral in southwest England.

In 2010, while a 1215 copy from the British Library was on display at the Manitoba Legislature, the Queen unveiled a stone from Runnymede that became the cornerstone of the new Canadian Museum for Human Rights.

A 1225 copy of Magna Carta from Durham Cathedral will tour Canada this year to mark the anniversary. It will stop at the Canadian Museum of History in Ottawa (June 11-July 26), the Canadian Museum for Human Rights in Winnipeg (Aug. 15-Sept. 18), Fort York National Historic Site in Toronto (Oct. 4-Nov. 7) and the Legislative Assembly of Alberta’s visitor centre in Edmonton (Nov. 23-Dec. 29).

Both the Magna Carta and the Canadian Charter of Rights and Freedoms are a sick joke in Canada.

Equal Justice
Ontario is riddled with fas.cist corrupt public officials, specifically Police, the Judiciary, crown attorneys and in particular child protection lawyers who are appointed as judges to keep this collection of criminals "Above the Law"

These same group of criminals, are given billions of dollars in federal and provincial funds to keep themselves above the law.

Trial by Jury.
That rarely happens and jurists are paid so little as to make anyone called for Jury Duty to despise and hate those who might be victims of injustice.

Men's Rights
Fathers now are deprived of their property, forced to live in slavery and poverty and its now normal for men to are receiving welfare to have even their welfare checks garnisheed that puts men into the street or into concentration camps for men by the thousands.