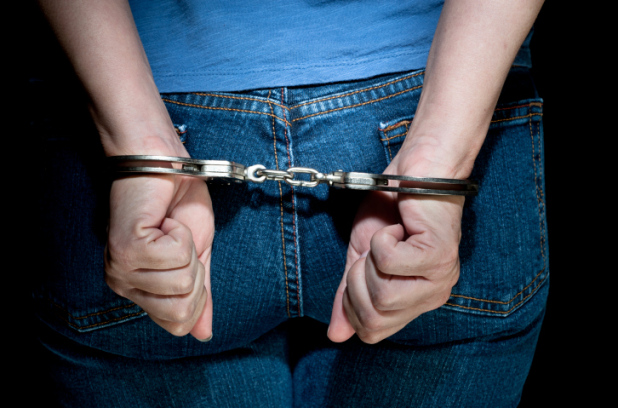 A person is seen handcuffed in this stock image

SURREY, B.C. – A soccer club in Surrey, B.C., has suspended a coach arrested in the United States for allegedly seeking sex with a 12-year-old girl who turned out to be an undercover agent.

The U.S. Attorney’s Office said 47-year-old Kuldip (KUL’-deep) Mahal was arrested on Tuesday after he went to a park in Bellevue, Wash., to meet the supposed girl.

The office says Mahal had responded to a Craigslist posting before allegedly sending multiple sexually explicit messages and photos of himself to an underage girl.

Surrey United Soccer Club president Tom Duncan says in a statement that Mahal has been suspended as a coach until further notice.

He says the club had followed procedures outlined by its governing body and received a confirmation that a criminal record check on Mahal was clear.

Mahal has made his first appearance in the U.S. District Court in Seattle since being detained and is expected to remain in detention pending a hearing next Monday.

“It is a legal matter and will be resolved by the various legal jurisdictions.”

NOTE: These comments are directed to the FBI and or any Foreign Immigration service considering admitting any of the following Criminal Child Abusers from Ottawa Ontario Canada

The FBI should take a note of the name Marguerite Isobel Lewis, an Evidence Fabricating Lawyer for the Children's Aid Society of Ottawa.

Marguerite Lewis Fabricates Evidence Personally to abuse children by fabricating "admissions" of the most serious allegations of child abuse when she knew no such admissions were made.

Then a violent mother who admitted assaulting children and partners without provocation, had Marguerite Lewis Fabricate evidence that this was just discipline.

If you think that's bad, Ottawa CAS lawyer Tracey Engelking got an Exparte Order from Corrupt Judge Monique Metivier in an illegal corrupt EXPARTE hearing without notice to the male victim of attempted murder, to place children in the care of one of Ontario's most violent women.

These child abusing lawyers for the Ottawa Children's Aid Society knowingly ABUSE children and get away with it thanks to a Corrupt Child Abusing Judiciary at 161 Elgin Street.

If you are a father in Ottawa you stand a grave chance of being a male victim of domestic violence and if you meet the above, you will never see your children again.

If these scum ever try to enter any country like the USA or Australia or Russia, these child abusing Criminals should be noted as Criminals and refused entry.

Full documentary evidence is available to any foreign Police Force or immigration authority.