By Brian Rohan And Kristen Gelineau 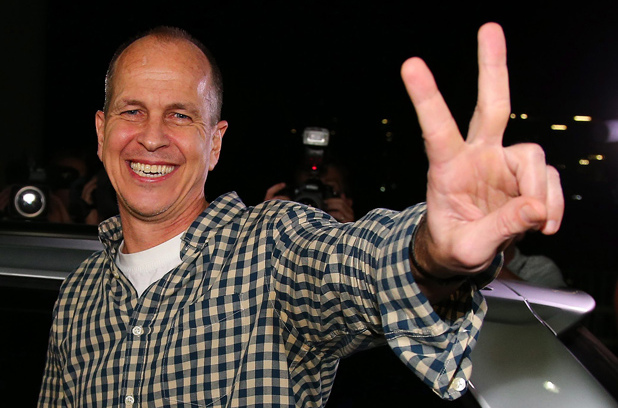 CAIRO – Activists and family members of two al-Jazeera journalists imprisoned in Egypt eagerly awaited news on their status on Wednesday, after an Australian colleague of theirs returned home after a year in prison.

Peter Greste, 49, who was released on Sunday after 400 days behind bars in a case widely condemned as a sham by human rights activists, was greeted by friends and relieved family members who had tirelessly campaigned for his release.

But the fate of Greste’s still-jailed Egyptian colleagues remains unknown. Egyptian-Canadian Mohamed Fahmy and Egyptian Baher Mohammed were arrested along with Greste in 2013 over their coverage of the violent crackdown on Islamist protests following the military overthrow of President Mohammed Morsi.

Canadian Foreign Minister John Baird said this week that Fahmy’s release was imminent but gave no timeframe. Fahmy’s family said authorities required that he give up his Egyptian citizenship as a condition for his release.

However, Mohammed, 31, who received the longest sentence in the case — 10 years — has no second citizenship and his family worries that his fate as an Egyptian is less clear.

Married and a father of three, he lives in Cairo. He covered the 2011 Libyan uprising before joining Al-Jazeera as a producer, and his father was at one point the manager of the Muslim Brotherhood’s television channel, named January 25, which was launched after Egypt’s 2011 uprising.

“His situation is different because he only has Egyptian citizenship,” he said. “He is now awaiting proceedings with a different court, and his freedom depends on that case being finished.”

Activists and supporters have taken to social media to call for Mohammed’s release, with some urging a foreign country to issue him a passport that could even facilitate such freedom.

A Facebook page called Free Baher had over 12,000 ‘likes’ as of Wednesday night, attracting thousands of them soon after its creation.

In Australia, several time zones ahead, Greste landed in the Queensland state capital of Brisbane early Thursday morning after spending the past two days recuperating in Cyprus.

Supporters held up signs at the airport saying, “Journalism is not a crime.”

“I can’t tell you how ecstatic I am to be here,” Greste told reporters. “This is a moment I’ve rehearsed in my mind at least 400 times over the past, well, 400 days. But this is all tempered … by real worries for my colleagues.”

Australian Prime Minister Tony Abbott thanked the Egyptian president by telephone on Tuesday for his help in securing Greste’s release.

The Australian Foreign Minister Julie Bishop was more than prepared to get involved in the Peter Greste and a host of other cases around the world however when it comes to
an Australian Child Citizen incarcerated in Ottawa, the Australian Foreign Minister turned a blind eye to Fabrication of Evidence by Ottawa Lawyer Marguerite Lewis, an outrageous and shocking Criminal Child Abuser who is able to Fabricate Evidence with impunity in front of Judges, like the Dishonourable
Timothy Minnema , a former CAS lawyer who, was "anointed" to the Ontario Superior Court Judiciary, because he was rightly perceived to be corrupt enough to make decisions to support the Government's Facist Agenda of promoting violence towards fathers and children.

This disgusting criminal state of affairs exists because politicians in Canada are too chickenshit to stand up and speak out against the most horrible and prolific forms of child abuse that are far more damaging to children than child hood sexual abuse.

The Ottawa Judiciary is unfortunately riddled with Corrupt Professional Child Abusers who have total immunity from Criminal prosecution.

Recently two Judges "Retired" to avoid Judicial Council investigations. One was Denis Power, a well known Corrupt prolific abuser of power who once issued a restraining order against a father for a Judge issuing Criminal Charges against the mother for assaulting him 5 times including one with a 12inch knife buried in his face.

Then there is Monique Metivier who "retired" AFTER giving evidence Fabricating Marguerite Lewis an order for Custody, Exparte, without a hearing without notice to cover up a host of obvious criminal offences.

That's just the start of the story.

You can expect a host of "Retirements" from the Ottawa Judiciary while this saga will continue until these insults to justice turn up their professional but criminal toes.