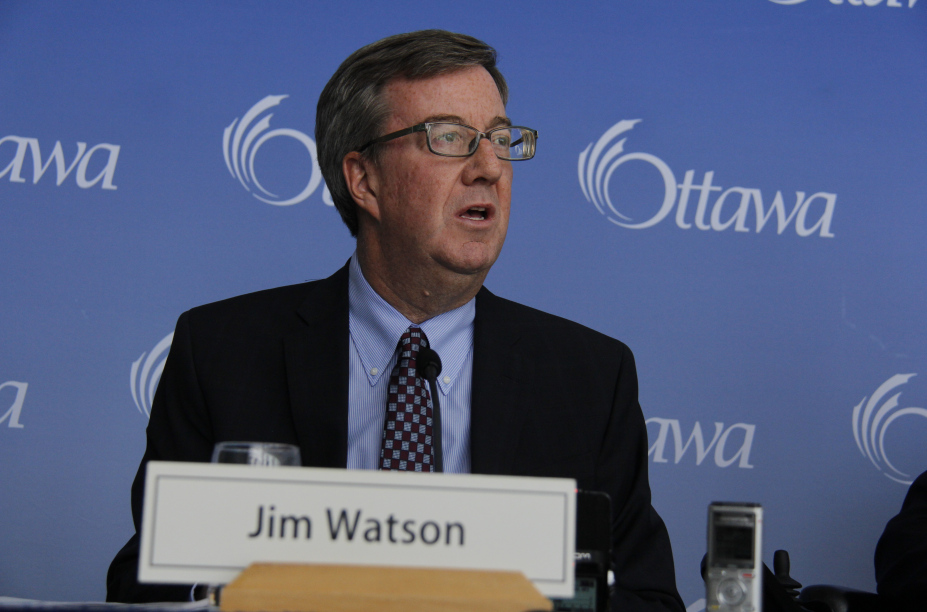 Ottawa Mayor Jim Watson speaks to reporters after tabling the draft of the 2015 budget on Wednesday, Feb. 4, 2015.

Higher transit fares, a tax hike and funds to fight Ottawa’s gangs are part of the city budget plan this year.

Councillors tabled a draft of the 2015 budget on Wednesday. As promised, homeowners can expect a two per cent increase on their tax bills this year – or an additional $67 per year for the owner of an average $355,000 urban home ($55 for folks in rural areas of the city). For commercial building owners, the tax increase is smaller, going up by 1.37 per cent over last year.

However, water and sewer taxes will rise six per cent. That means the average homeowner will shell out $48 more this year than last.

“This is a reasonable budget that respects taxpayers’ ability to pay, while maintaining high-quality public services,” said Ottawa Mayor Jim Watson, in his opening speech.

The city will also make its first annual $400,000 investment in an exit strategy for gangs. Of that amount, $100,000 will go towards employment strategies for those leaving the street life or the siblings of gang members.

OC Transpo fares will increase by 2.5 per cent (an extra $2.50 for regular adult monthly passes).

The biggest slices of the $3 billion budget are transit, community and social services, water and sewer and police funds.

Other budget highlights:
• Garbage fees freeze for the third year (that means $82 for the average homeowner)
• The four-year recreation fee freeze is over. Recreation facilities will see a two per cent tax rate cap this year.
• 20 fewer city hall bureaucrats. But these positions will likely be reduced through attrition, not layoffs.

Coun. Tobi Nussbaum reminded everyone at council that this is only a draft budget and not the final result.

Budget consultations will be held across the city Feb. 9-12, with additional standing committee consultations (such as the transit commission, police, library and public health boards Feb. 17 to March 5).

The final budget will be brought to council for approval on March 11.

It boggles the brain to imagine just how the City of Ottawa is going to dispense some $400,000 dollars in crisp $100 Bills to members of Gangs who have the right connections with the Ottawa Police.

It also boggles the brain that the Entire City Council and every local politician is too gutless and too selfish to give a dam about the Epidemic and or CessPool of Corruption in Ottawa that is bleeding the residents of Ottawa Billions of Dollars each year.

The City pays for Welfare, Policing, subsidized housing, court security and legal costs that run up to several Billion dollars.

A large portion of those expenses are directly Funding Criminal Offenses and in particular TWO Criminal Organizations that need disbanding.

First, The Ottawa Police habitually Fabricate Evidence. Just Terminating the services of the worst offenders "MIGHT" send a bit of lesson to the rest but typically, nothing short of clean sweep will change the Culture of Criminality at the Ottawa Police who spend most of their time, Fabricating Evidence Against Male Victims of Domestic Violence because that's heresy in their twisted corrupt sick personalities.

AT the Ottawa Court House, Ottawa Police habitually fail to comply with court orders, especially for Disclosure. That makes them the worst criminals and abusers on earth.

What is truly sickening is the likes of Det. Peter Van Der Zander who Fabricates Evidence brazenly to NOT charge the most violent of female offenders and to obstruct justice and get a way with it because the Rotten Corrupt Police of Ottawa extend from the lowest forms of life like the Child Abusing Evidence Fabricating POS like Peter Van Der Zander to the top, the Chief of the Ottawa Police who seems to think its quite a buz to be in charge of one of the Worlds Most Corrupt Police Forces.

Makes you wonder what he does for sadistic pleasure when he is not working.

The Ottawa Police and their partners in Crime, the Children's Aid Society operate with a Nazi like agenda of "Gender Superiority". The proof is the incredible 200 plus million dollars a year the Ottawa Police admit is spent on "Partner assault" which is the sanitary name for a Fascist Program of Father Cleansing in the City of Ottawa.

If you are a male police officer with any police force in Ottawa you are just as likely to be the victim of this Fascist Policy of the Ottawa Police.

While you all work with Scum like Peter Van Der Zander you are all destroying your own reputations by remaining silent in the face of systematic criminal behaviour and abuse of trust by your fellow "officers".


Tell him to resign

The City of Ottawa turns a collective blind eye and deaf ears to the incredible Criminal use of Taxpayers funds for the Funding of Criminals such as the Corrupt Ottawa Police who spend more effort in criminal enterprises than they do in fighting real crime by real criminals who in Ottawa work for the Ottawa Police, the Children's Aid Society of Ottawa, the Crown Attorney's office not to mention, the Club House at on the 5th floor at 161 Elgin Street Ottawa.

Against Male Victims of Domestic Violence to create

statistics that justify their propaganda that

every year asks for more money for more officers

to Fabricate More Evidence and leave the

Citizens of Ottawa a trail of destroyed lives.

A classic example of this Endless Criminal Domestic Terrorism is

Phill Hiltz-LaForge, a professional Fabricator of Evidence, Obstructor of Justice and child abuser.

These creeps cost Ottawa around One Billion Dollars a year and if the politicians took even the closest of a genuine look, they would put aside their political differences to get rid of the Scum who are part of the Domestic Terrorists that make up the Ottawa Police and the Children's Aid Society of Ottawa.

Memo to Jim Watson.
Ask the Police Chief when he is going to lay charges against
Detective Peter Van Der Zander or Marguerite Lewis a lawyer for the CAS Ottawa both of whom blatantly fabricate evidence that costs Ottawa Tax payers millions of dollars not to mention a trail of abused children.

Ottawa Mayor Jim Watson is just ONE local politician who turns a blind eye to the mass of Ottawa's State Funded Criminal Organizations that each year he writes hundreds of millions of dollars.