Anger, grief in Mideast at IS killing of Jordanian pilot 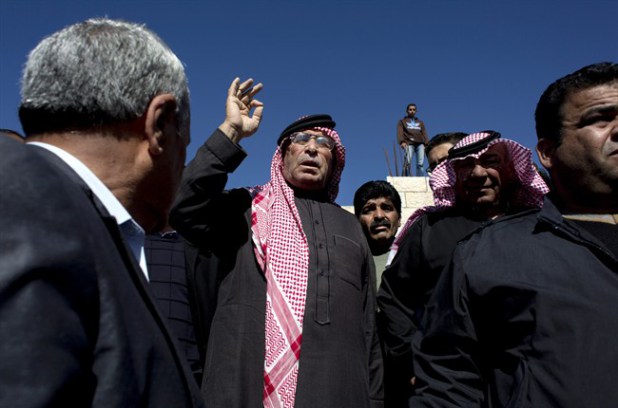 CAIRO – The horrific fate of a captured Jordanian pilot, burned to death by the Islamic State group, unleashed a wave of grief and rage on Wednesday across the Middle East, a region long accustomed to upheavals and violence. Political and religious leaders united in outrage and condemnation, saying the slaying of the airman goes against Islam’s teachings.

The gruesome militant video of the last moments in the life of 26-year-old Lt. Muath Al-Kaseasbeh, whose F-16 crashed in Syria in December during a U.S.-led coalition raid on the extremist group, crossed a line — beyond the beheadings of Western hostages at the hands of Islamic State extremists.

From the world’s most prestigious seat of Sunni Islam learning, Cairo’s Al-Azhar Mosque, Grand Imam Ahmed al-Tayeb said the IS militants deserve the Quranic punishment of death, crucifixion or the chopping off of their arms for being enemies of God and the Prophet Muhammad.

“Islam prohibits the taking of an innocent life,” al-Tayeb said. By burning the pilot to death, he added, the militants violated Islam’s prohibition on the immolation or mutilation of bodies — even during wartime.

Under many Mideast legal systems, capital punishment is usually carried out by hanging. In Iran and Pakistan, stoning to death as punishment for adultery exists in the penal code but is rarely used. Beheadings are routinely carried out in Saudi Arabia, and Gaza’s militant Hamas rulers have on occasion publicly shot to death Palestinians suspected of spying for Israel.

But burning to death as a punishment proscribed by an Islamic court — such as the self-styled tribunals set up by the Islamic State militants in areas under their control — is unheard of in the contemporary Middle East. The IS extremists captured a third of both Iraq and Syria in a blitz last year, proclaimed their caliphate and imposed their harsh interpretation of Islamic law.

In Saudi Arabia, prominent cleric Sheik Salman al-Oudah cited on Wednesday a saying attributed to the Prophet Muhammad, which reserves for God alone the right to punish by fire.

In Qatar, cleric Youssef al-Qaradawi — respected by the Muslim Brotherhood and other Islamists — issued a five-page statement listing Quranic verses and sayings, also attributed to the prophet and telling Muslims to not mistreat prisoners of war.

But al-Qaradawi tempered his admonishment of the immolation death of the Jordanian pilot by criticizing the international community’s “laxity” toward Syrian President Bashar Assad, saying such an attitude “created these extremist groups and provided them with a fertile environment.”

In Algeria, cleric El-Hadi Shalaby noted that the majority of Islamic State group’s victims have been Muslims, both Sunnis and Shiites.

“What hurts me as a Muslim is that they (IS militants) do all this in the name of Islam,” he said. “The Muslim faith is utterly foreign to these practices.”

However, some sought to justify the Islamic State’s killing of the pilot.

Hussein Bin Mahmoud, an Islamic State-linked theologian, claimed on one of the group’s social media forums that two of the Prophet Muhammad’s revered successors ordered punishment by fire for renegades shortly after the Prophet’s death. Al-Azhar has long disputed this claim.

Bin Mahmoud also cited a Quranic verse that requires Muslims to punish their enemies in kind. Since U.S.-led airstrikes “burn” Muslims, he argued, the IS group must burn those behind the raids.

But that view has only been embraced by a radical fringe, and mainstream Muslims united in condemnation of the killing on Wednesday.

Iyad Madani, the leader of the 57-nation, Saudi-based Organization of Islamic Cooperation — the world’s largest bloc of Muslim countries — said the killing showed total disregard for the rights of prisoners under Islam, as well as what he called the moral standards for war.

There is a “malaise” in parts of the Middle East, along with the “intellectual decay, the political fragmentation and the abuse of Islam, the great religion of mercy,” he said.

The UAE is one of the most visible Arab members in the U.S.-led coalition battling the Islamic State group, which also includes Jordan.

In predominantly Muslim Turkey, President Recep Tayyip Erdogan called the killing an act of “savagery,” adding that “there is no such thing in our religion.”

Iran, which has aided both Iraq and Syria against the IS, said the killing of the pilot was an “inhuman” act that violated the codes of Islam, according to Foreign Ministry spokeswoman Marziyeh Afkham.

Tunisia’s Foreign Ministry decried the “cowardly” and “savage” act. The newly elected President Beji Caid Essebsi said the pilot’s slaying was an “odious crime” incompatible with the principles of Islam and all other divine laws.

In his native Jordan, the killing of al-Kaseasbeh — who had been the subject of intense negotiations over a possible swap with an al-Qaida prisoner on death row — drew swift retribution.

The prisoner, an Iraqi woman convicted of involvement in a triple hotel bombing in Amman in 2005, was executed along with another al-Qaida prisoner at dawn on Wednesday.

The pan-Arab al-Hayat newspaper denounced the pilot’s killing with a one-word headline on the front page: “Barbarity.”

“How many … are there, whose names we are ignorant of, slaughtered by the Islamic State and their brothers?” asked an article in Lebanon’s left-leaning daily Assafir.

Jordanian politician Mohammed al-Rousan wept openly on national television as he described watching al-Kaseasbeh’s death, saying even people accustomed to violence could not bear to see a man burned alive.

Then, his tears turned to rage.

The Residents of Ottawa should be more concerned about the Domestic Terrorists of Ottawa and this post is limited to just three examples.

Det. Peter Van Der Zander actually claimed in his report that the mother

denied attempting to strangle the father. The Ottawa Police then repeatedly

asked her the question, the violent mother never made such a denial.

death threats and assault for some 55 assaults in one day. The evidence

consisted of Doctors reports, doctors photographs, reports to lawyers and

Digital Audio Recordings of all the assaults.

with a Strangle Hold to the neck, and with both hands around his neck with her

thumbs intertwined around his windpipe, she coldly told him "My father was KGB,

I know what I am doing".

The proof of the Corrupt Vile nature of Det. Peter Van Der Zander is that he

be dreamed of to justify a "reflex action".

drivers licence can do, join the Ottawa Police to Fabricate Evidence to NOT