Ottawa city budget to be tabled on Wednesday 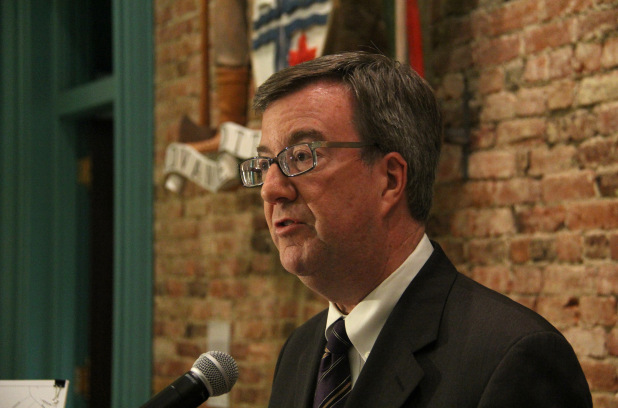 Ottawa Mayor Jim Watson speaks to reporters on May 1, 2014.

If this year’s budget has a tagline, it will likely be “progressive and affordable.”

Those are the words Ottawa Mayor Jim Watson used to describe the budget on Tuesday, a day before it was set to be tabled.

Like in his election campaign, Watson is promising a two per cent increase to the property tax rate. But he also said public services will be maintained.

“You’re not going to see any kinds of slashing and burning approach,” he said. “I think you’ve seen the last four budgets are pretty much steady as she goes.”

The Ottawa Police Services Board will first table its budget at 8:30 a.m. on Wednesday, followed by the city and lastly the transit commission.

The City of Ottawa is spending literally Billions of dollars on promoting Crime and social destruction.

The Ottawa Police a $300 Million Dollar Budget has 75% of that budget earmarked for Ontario's Fascist Program of Gender Superiority that promotes violence by women towards men.

Even Ottawa Staff Sgt. Isobel Granger admits in a hell of an understatement that men are afraid to report domestic violence.

The fact is that the City of Ottawa spends around 200 Million Dollars on prosecuting Male Victims of Domestic violence that have an incredibly low rate of convictions even when the Ottawa Police get their own extreme feminist Crown's to knowingly prosecute victims of domestic violence and then get their own judges who do what ever it takes to keep the Ottawa Police happy.

That means, habitually failing to provide disclosure, to be in contempt of court orders for disclosure, to have Officers of the Ottawa Police systematically Fabricate Evidence.

Now, for a Classic Example of How The City of Ottawa Funds Hundreds of Millions of Dollars for Facist Criminals.

Det. Peter Van Der Zander actually claimed in his report that the mother denied
attempting to strangle the father. The Ottawa Police then repeatedly failed to
comply with court orders to supply the video of that interview which finally
revealed that not only that the Vile Corrupt Peter Van Der Zander never asked
her the question, the violent mother never made such a denial.

Later another officer of the Ottawa Police charged the violent mother with death
threats and assault for some 55 assaults in one day. The evidence consisted of
Doctors reports, doctors photographs, reports to lawyers and Digital Audio
Recordings of all the assaults.

A few weeks later, this same violent woman assaulted her new male partner with a
Strangle Hold to the neck, and with both hands around his neck with her thumbs
intertwined around his windpipe, she coldly told him;

"My father was KGB, I know what I am doing".

grangeri@ottawapolice.ca who removed him from the file but did NOTHING to
address his fabrication of evidence.

The proof of the Corrupt Vile nature of Det. Peter Van Der Zander is that he
claimed that the mother's "assault" was a "reflex action" when there was NO
evidence of any provocation by the father or of any action that could possibly
be dreamed of to justify a "reflex action".

out of the law class at Carleton University and did what any drop out with a
drivers licence can do, join the Ottawa Police to Fabricate Evidence to NOT

Police charles.bordeleau@ottawapolice.ca who turns a blind eye to offences by
his Criminal Organization.

The City of Ottawa is being sucked dry of money by two Criminal Organizations to the tune of several Billion dollars a year.

On the Surface its only $300 million to the Ottawa Police and around $100 Million to the Children's Aid Society of Ottawa, two totally unaccountable Criminal Organizations that pretend to be on the right side of the law.

The City of Ottawa pays dearly in the form of Social Assistance, subsidized housing, and a host of other expenses including "one Stop Divorce Shops" that specialize in creating female victims while promoting violence and murder towards fathers.

The courts are swamped, with cases of prosecutions against male victims of domestic violence where the judiciary openly encourage Criminal Offences by the likes of  ROB GODMAN a supervisor of  Sheer Terrorism" at the Children's Aid Society of Ottawa who systematically supervised fabrication of evidence and or omitted evidence to Abuse children.

This lowest form of life actually has the power to Direct, directly or
indirectly, the Head Crown Attorney one corrupt child abusing TARA DOBEC, to
"Stay Charges" against the most violent female offenders of children and
partners while similarly directing the Ottawa Police to lay malicious and
vexatious charges against male victims of domestic violence.

This professional child abuser acts in blatant contempt of the Ontario
Legislation by using what is called "The Subterfuge of Extended Visits".

That's the stunt the CAS use to "make custody decisions" instead of seeking the
court to place a child/ren with a person other than the person they took the
child from which is another story of unaccountable mass child abuse in Ontario
at the cost to the taxpayer of Billions of Dollars that every resident of Ottawa is paying a hell of a price for.

To date, NOT a single Ottawa Politician is willing to step up and speak up against the Criminal offences committed on a habitual basis specifically by the Ottawa Police and or their partners in Fascist Domestic Terrorism, the CAS of Ottawa.

If you have been a victim of Child Abuser Rob Godman aka Robert Godman formerly
of the Office of the Children's lawyer, drop us an email.