Lisa MacLeod made dramatic changes coincidental with the equally dramatic and for most unexpected Baird resignation. 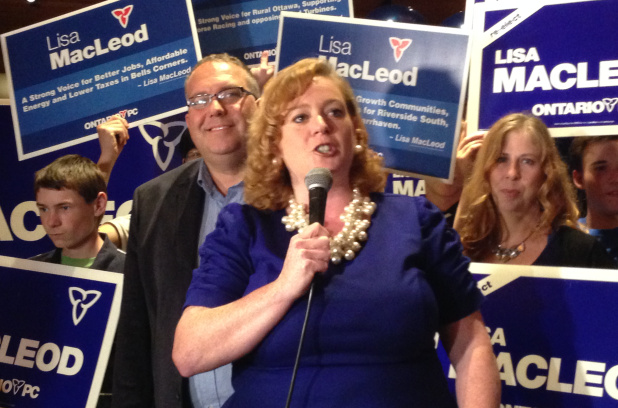 Nepean-Carleton MPP Lisa MacLeod is not ruling out running federally, now that MP John Baird is bowing out.

That would mean MacLeod would drop her leadership bid for the Ontario Progressive Conservatives.

She has until Friday to decide – that’s the deadline day for a $50,000 deposit for the provincial race.

Between Baird’s resignation and Nipissing MPP Vic Fedeli dropping out of the leadership race, things have changed within a 48-hour period for MacLeod.

She said many people in her riding have contacted her about running federally.

“I am absolutely humbled that people of Nepean view me as a strong successor to John Baird who I once succeeded before,” she said.

Just days ago, her Telephone Robots' were hard at work while her staff were refusing to answer emails and phone calls.

That was all coincidental with a visit to Ottawa of Kevin Rudd and incredible string of errors by Tony Abbott.

While there is no apparent connection with Tony Abbott, there is a remarkable coincidence with statements made by Kevin Rudd that would indicate Baird and Rudd have already made plans on their future connections.

We can assume that Baird has some very good reasons and in depth plans that few know about that probably include a future challenge for the leadership of either the Conservatives or the Liberals.

Baird is just as likely to be elected a liberal as a conservative with a very senior ministerial position guaranteed for him to make the switch.

Justin Turdeau is guaranteed to make classic mistakes as a result of power going to his head and making decisions without consulting anyone and or shooting his  mouth off without thinking. Both of which are habits that have led to the removal of Tony Abbott which has yet to be announced but is equally certain as his Abbotts falling popularity that is beyond the comprehension of Justin Trudeau as is any ability to have any understanding of Canada's present or future problems of social and economic destruction.

Harper is equally ignorant and blind to the economic and social time bomb that is being ignited by its own Government Funded Domestic Terrorists and that's another story.