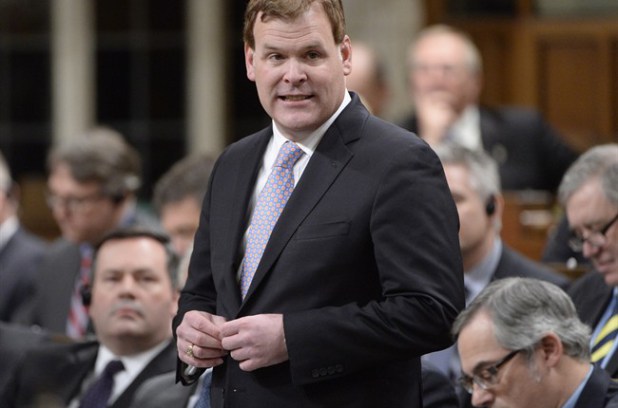 Foreign Affairs Minister John Baird announces his resignation as he speaks in the House of Commons in Ottawa on Tuesday, Feb. 3, 2015. THE CANADIAN PRESS/Adrian Wyld

TORONTO – John Baird’s surprise resignation as one of Stephen Harper’s most high-profile cabinet ministers set tongues wagging across the country: Was he pushed? Is there some scandal brewing? Did he have a falling-out with the prime minister?

Or was it simply, as some career coaches suggest, that after 20 years in the cut and thrust of politics, the 45-year-old Baird decided it was just “time” to go.

“I think there are a number of triggers that lead to career change in mid-life and mid-career,” says Mark Franklin, president and practice leader of CareerCycles.

Experiencing a health scare — either yourself or in a family member, friend or co-worker — can be a major impetus to question one’s career trajectory, says the Toronto career management counsellor.

In media interviews following his departure announcement, Baird admitted he had been severely shaken by the sudden death last spring of former finance minister Jim Flaherty, a close cabinet colleague in Parliament and previously in the Ontario Legislature. Flaherty’s death, just a month after retiring from politics, spurred Baird to reflect on his other goals and potential opportunities, he said.

But Franklin says that in many cases, the desire to change jobs doesn’t arise from such an unexpected jolt, but is more insidious.

“What happens for a lot of people is that the dislikes build up, that people get a number of things that they don’t like about a job and it hits a certain threshold,” he says. “It might be discouragement with progress through a career path, it might be a bad boss — which is a really common situation. It might be boredom with the job itself.

“Sometimes, it’s a little extra thing that pushes you over, that’s what we see. You get passed over for an opportunity or a promotion you thought you should have gotten but you didn’t; there’s a change in leadership and you really dislike what’s going on with the new leader.”

Shirin Khamisa, founder of Careers By Design in Toronto, agrees job ennui is a common motivator for people to start casting about for a new direction.

“What was engaging for people at 20 starts to be not so interesting at 30 or 40. So they start to get bored or perhaps they’ve achieved some big goals that they had set in their career and they’re not sure what the next big goals should be,” she says.

“Related to that is sometimes people are just feeling so low-energy at work and they don’t realize that it might be because of a loss of interest or passion in what they’re doing.”

“And they realize perhaps ‘there’s something bigger that I want to do. I want to leave a legacy.’ It doesn’t have to be such a lofty type of thing — there’s just a sense that they’d like to contribute to something more than just the bottom line.”

Franklin’s advice to anyone contemplating a job change, or even a whole career shift, is to begin intensively exploring options before “you quit the day job.”

That includes some focused introspection, asking yourself what you like about your job and work environment, and what you don’t like, he says.

Canadians in general are notoriously poor at career management skills, he contends. When frustrated with their work life, it’s common for many people to sift through online job boards to look at postings, without having thought much about how they want their future to look.

“They react. They might fire off an application if something looks enticing, but they’re not stepping back, taking stock and saying: ‘What do I really want now at this point in my life?'”

That’s not to say that going through the exploratory process — either on one’s own or with a certified career coach —doesn’t have its pitfalls.

Franklin says that while having a meeting about a new career opportunity, for instance, can put someone on a high, there can also be lows in the form of anxiety, disturbed sleep and a sense of feeling lost — and losing one’s identity.

“You start to identify yourself with your job or position and it’s quite difficult to release that working identity in favour of something else,” he says, adding that many people ruminate about whether they’re foolish to want to alter course.

“And that is accompanied by some thoughts and feelings that can be very problematic: ‘Am I employable? If I leave this job, can I really make it?’ These kinds of changes are a real shock to the system and people have a range of reactions.”

Khamisa says that besides losing a sense of one’s identity, many people fear giving up what they’ve been committed to and built during their career, which may have spanned decades.

“But I see so many benefits when people are willing to take on their fear and act and move forward despite that fear,” says Khamisa, who felt frustrated and under-utilized in her work, before staring her career counselling business 10 years ago.

“We’re experiencing emotions of joy, of curiosity, we’re feeling more at ease. So we feel better, we make more of a contribution, and oftentimes at mid-life, life starts taking on a new purpose.

“I often joke with my clients and I say part of my job is to re-introduce you to yourself.”

John Baird's decision to "leave" is coincidental with calls from Kevin Rudd and the reality is that John Baird's day in politics is far from over. His plans go beyond the next election when the Liberals are elected and to when that Liberal Government falls flat on it's face with incompetent leadership and Canada will require some competent person to be the Captain of the ship.

Absent those very positive possible reasons, there is also a real chance that some dirt is about to explode and that John Baird's sudden decision is coincidental with the other possible alternative explanation for such an amazing decision to leave one of the most prestigious ministerial positions in the Government.

There is a very dirty smell coming from Parliament Hill from the Billions of Dollars given, or thrown away, by the Harper Government to Ontario's Domestic Terrorist Organization, the Criminal Cartel called The Children's Aid Societies of Ontario.

Its that lack of respect for the fundamental principles of Justice, its the systematic corr.uption of our Ontario Superior Court Judiciary that make Canada one of the Most Cor.rupt Lawless places on the planet.

Don't expect anything different from John Baird when he returns to lay down his cards to be made the Captain of the ship Canada.