Liberal spill: Something has to give, someone has to go 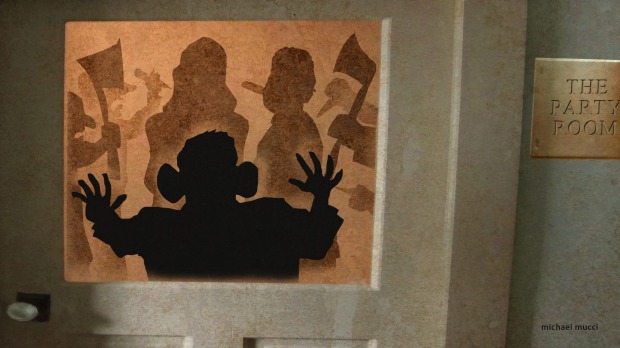 In November 2009, when shadow ministers were resigning, Kevin Rudd was dominating, Malcolm Turnbull was flat-lining in the polls and the Liberal Party was sundered over the issue of taxing carbon emissions, three men went to visit Joe Hockey in his Parliament House office. They offered him the leadership of the party. They had the numbers.

The three were Senator Nick Minchin, then opposition leader in the senate, Tony Abbott, who had decided not to run, and Senator Eric Abetz, now leader of the government in the Senate. Minchin had previously planned to resign from the shadow ministry over Turnbull's support for Rudd's proposed emissions trading scheme, which he regarded as disastrous policy, but not work to remove Turnbull. Then came a spill motion, which neither Minchin nor Abbott instigated. It failed, but revealed the extent of internal dissatisfaction.

The leadership was now Hockey's for the taking. But Minchin, Abbott and Abetz wanted something in exchange. They wanted Hockey to oppose the carbon emissions policy.

Hockey refused. He famously said that if he won the leadership he would give the party room a conscience vote, as a healing gesture.

That crucial judgement call, on November 30, 2009, would, ultimately, ensure that Hockey would never become Prime Minister.

The next day he did not even survive the first ballot. Later, when it was suggested to Abbott that it was not be a good idea to have Hockey as shadow treasurer, Abbott responded: "Joe is a great retail politician."

Perhaps, but Hockey turned out to be a disastrous retail treasurer. The framing, drafting and selling of the government's first budget was poor in all three phases. Its execution made a mockery of Abbott's commitment to no surprises and no news taxes. The tax on visits to doctors was unworkable. The budget burnt enormous amounts of political capital without extracting a commensurate budget pay-off. Its most contentious elements had no chance of passing a Senate where the populist Palmer United Party held the balance of power.

The Hockey budget failed every test. All pain, no gain. In the febrile leadership speculation of the past 12 days, Hockey's name never came up.

If it all unravels for Abbott and Hockey, at least Abbott became Prime Minister. He led the Coalition in two elections, won big swings in both, fought Labor to a draw in 2010 and smashed them in 2013. He has his place in history.

As for Hockey, his own party room wants him gone. It wants Turnbull installed as treasurer, at the least, as soon as possible.

Hockey is not the only key member of the government the party room wants removed. The other is Peta Credlin, the Prime Minister's chief of staff. Her position is terminal. I had assumed she could be the PM's greatest asset. Abbott clearly felt the same way. Then I started hearing complaint after complaint from within government.

Internal complaints grew into news stories about her management style, her centralised power, her insulation of the PM. The trickles of internal discontent grew into currents of news. These currents became a confluence, a river of public attention and internal disquiet. She became ubiquitous, even a staple in political cartoons.

Staff should never be the story. In damage control, Credlin has ceased to attend cabinet meetings. She is no longer a member of the government staff committee, with oversight of all appointments. When the Prime Minister described criticism of Credlin as "sexist", the mood in caucus changed. If Abbott was saying that the party would have to get rid of him in order to get rid of Credlin, then so be it.

Caucus wants her gone, not muted. Credlin is not a scapegoat. It is not about gender. It is about management.

All of this is why the Prime Minister's decision to award a knighthood to the Duke of Edinburgh, itself inconsequential, became the catalyst for a full-blown crisis.

There are two big differences between the internal revolt that unseated Rudd in 2010 and the upheaval now facing Abbott. Rudd was deemed by his colleagues to be a monomaniacal impossibility to work with. In contrast, Abbott is personable and well liked. But dreadful poll numbers over-ride amiability.

Then there are the election debacles in Victoria and Queensland, infinitely more meaningful than opinion polls.

Something has to give. Someone has to go.

What the heir apparent, Malcolm Turnbull, and the deputy leader, Julie Bishop, and most of the party, will be extremely wary about is how the public reacted after Julia Gillard and her supporters removed Rudd. The gravity of decapitating a Prime Minister in his first term, after he led the Coalition to a decisive election victory, would be mimicking Labor at its most internecine. This is not a legacy the Liberals want to emulate.

And there are still two budgets left to repair the damage before the 2016 election. There is room to move, either way.

The fact that the spill was moved by WA backbencher Luke Simpkins does not help its cause. Last week, Simpkins was inside a rebel camp in Myanmar (Burma), offering solidarity to armed separatists. This was despite the Australian government quietly building a positive relationship with the Myanmar government, while encouraging reform. Simpkins' freelancing was reckless, self-indulgent and disloyal.

Finally, there is a precedent for removing a Liberal prime minister by the Liberal caucus. In January, 1971, John Gorton resigned as Prime Minister after failing to win a confidence vote in the party room. Gorton had been beset by losing seats at the 1969 election, poor polling, gaffs, and a torrent of speculation about the excessive influence of his private secretary, Ainslie Gotto.

That's quite a precedent.

Australians need to be embarrassed at their politicians propensity to pull out the knives and stick them into each other for the nation's top job.

The Liberals have to their credit behaved a little more honorably than labour however they are full of the near identical personalities that led labour into identical problems.

Tony Abbott is not perfect and has a problem with talking without thinking or prior consultation. His other problem is to fail to accept responsibility for his own errors in judgment. Even in the last few weeks, he has been unable to make a statement in the first person accepting responsibility. That's an international embarrassment.

Apart from that, Tony Abbotts errors of judgment were exceedingly minor and divert attention from his overall excellent work as a Prime Minister.

What is missing is Labour's concern regarding how a change in prime minister will affect Australia's international reputation.

Labour and Australia need to be reminded that Malcolm TurnBull has previously held and been fired from the role of leader of the liberal party. His probability of remaining in power any longer than Abbott or Rudd or Gillard is exactly the same and a similar national embarrassment that needs to end.