Liberals: The party for pretty people! 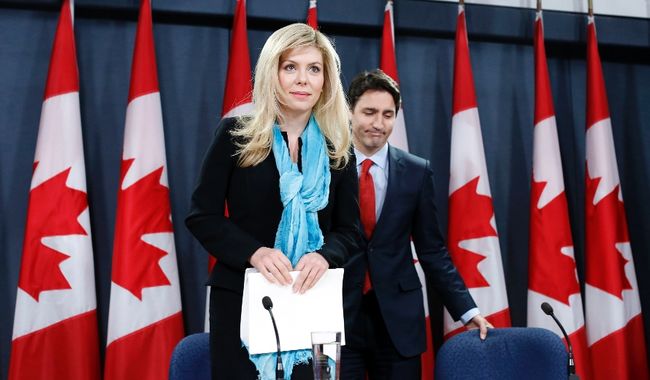 Mike Strobel says "Cynics are saying MP Eve Adams defected to the Liberals only because the Conservatives were sick of her.Poppycock. Those cynics ignore the most basic human dynamic: Pretty people flock together."REUTERS/Chris Wattie File
REUTERS

Funny business, a woman’s career — the things you drop on your way up the ladder so you can move faster” — Bette Davis in All About Eve.

Cynics are saying MP Eve Adams defected to the Liberals only because the Conservatives were sick of her.

They note the Stephen Harper crowd is saying good riddance.

These soulless skeptics roll their eyes and insist the Liberals took Eve only to get her boyfriend, a disgruntled former top advisor to Stephen Harper.

Imagine that bowl of insider juice falling into Liberal hands for the upcoming election.

Poppycock. Those cynics ignore the most basic human dynamic: Pretty people flock together.

Shallow, sure, but no shallower than anything else in politics.

So. suddenly Justin Trudeau isn’t the prettiest Liberal anymore. I hope his ego can take it. Dimitri must be worth it.

Not that it should matter, of course, but the ornamental Grit leader and his newest MP are perennial favourites in the Hill Times Sexiest MP polls.

Indeed, Adams won my sexiest candidate contest in the 2011 federal election, which may have been the high point of her political career. She also won Mississauga-Brampton South, as an enthusiastic Harper Tory.

The Party of the Pretty People (PPP).

That must be what Trudeau Jr. is trying to build. He’s pretty, and wants to be surrounded by more of the same.

Otherwise, why the hell? Cue the cynics...

“Why would you want Eve Adams as a candidate?” a reporter asked Trudeau at the defectfest.

“Did you think twice about this?” wondered another.

Instead, her Ottawa highlights include a temper tantrum over a $6 car wash and billing taxpayers for a cupcake.

Her fiance, Dimitri Soudas, was punted as a top Harper adviser over allegations he pulled strings for his love in a riding nomination race.

She has pissed off so many Tories, party brass told her she couldn’t run <i>anywhere</i> for them in the expected fall election.

So you can see why cynics are having a field day, why they smirked when Ms. Adams called Harper “mean-spirited,” then purred:

“I want to work with someone who inspires, not with fear mongers and bullies.”

Skeptics tittered maliciously as Eve confessed, “I have reached deep into my heart and deep into my mind and I can state with conviction that I am making the right decision.”

It is true that Trudeau nearly blew out his tongue trying to explain why he “welcomed” Adams, something about her “commitment to public service.”

He dodged questions about ol’ Dimitri and that goody-bag of secrets. But to paraphrase Bette Davis in All About Eve, “Fasten your seatbelts, it’s going to be a bumpy campaign!”

I wish Justin had just blurted out: “I’m beautiful! She’s beautiful! We’re all beautiful in the Liberal Party. We’re the party of Laurier and John Turner and my dad and other beautiful dudes. And dudettes, like my mom. It’s a beautiful day for pretty people!”

That might have shut down those cynics. It’s nature, stupid. Good-looking people hang together, like Brad Pitt and Angelina Jolie.

No wonder hot blondes keep jumping to the Liberals?

You’ll recall Belinda Stronach pulled the same switch in 2005, so she could become a Liberal cabinet minister and call herself The Honourable for life. Belinda was no stranger to Sexiest Politician lists, either.

If I were Stephen Harper, I’d keep a close eye on Michelle Rempel and Candice Bergen and his other blonde MPs.

There are plenty of real reasons for concern other than claiming that the Liberals are "pretty people".

First, she is a knock em dead, brown eyed blond thick red lipped Eye-Candy and its that hot female look that first sucked in Steven Harper who was falling over her trying to give her a leg up so to speak in politics.

She and her "partners" showed their true colours an Harper quite rightly decided to "cut her loose" whereupon she decided to flutter her eyelids at Justin Hormonal Trudeau who could not say no for his bite of the apple.

Justin flip flops and is just a professional politician like Harper or Wynne or any of the other endless string of gutless politicians who turn a blind eye to real problems Canada faces.

Harper recently tried to buy some votes, A billion Dollars worth were thrown to Ontario's Criminal Cartel of Children's Aid Societies who lawyers refer to as "The Ges..tarp.o.

Harper and Trudeau both turn a blind eye to the Male Sharia law applied by Ontario Police, the Judiciary that results in the courts being swamped with malicious prosecutions of male victims of domestic violence to fabricate self serving constantly escalating statistics to suit what the radical feminists want to see.

Eve and Justin Trudeau make a fine couple, leave them alone to show the world why they don't deserve a vote.