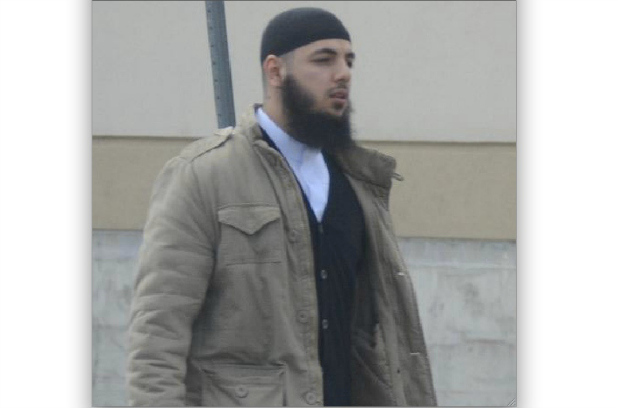 Awso Peshdary, the former Algonquin College student accused of terrorism-related charges, seemed to be in happier spirits Monday as he made his second court appearance in Ottawa.

Added to the long list of people he is prohibited from communicating with is Patricia Earle – the mother of Islamic State fighter John Maguire, who studied at the University of Ottawa.

Sonley said charges could be laid if an accused is found to have breached a non-communication order, which is enforced by the jail. Peshdary is sharing the same jail as Ashton and Carlos Larmond, both 24, and Suliman Mohamed, 21, who were arrested on terror charges last month.

“The onus here is on Mr. Peshdary to comply with the order,” said Sonley.

Mohamed and the Larmond brothers are scheduled to make another court appearance on Thursday.

Peshdary’s lawyer received from evidence from the Crown on Monday and he expects to receive a larger “package” in the coming days as his client waits in custody.

“He is feeling as you might expect. He’s eager to get this thing moving forward. So we’re just waiting to get more disclosure from the Crown,” said defence lawyer Richard Morris.

Before a police officer led him out of the prisoner’s box Monday, Peshdary appeared relaxed and smiled at his family members in court. He was remanded into custody and will return to court on Feb. 19.

As his family members left the courthouse, they declined to answer questions from the media.

Last week, the RCMP also laid terrorism-related charges in absentia against Maguire and another former Algonquin student, Khadar Khalib, 23. Both men are believed to have left Canada to fight for Islamic State or ISIL.

In recent terrorism cases, the Federal Crown, CSIS and the RCMP have been very successful however, this particular case has on the surface some serious problems.

In cases where the Police don't have a case, there is a common habit of the police refusing to provide disclosure generally because they lack the required evidence to support the charges.

This particular case was coincidental with the Government needing such a story, it was at least a remarkable coincidence.

The RCMP even supplied the photo for this story.

It begs the question as to IF the police sought the advice of the Federal Crown prior to making this particular arrest.

While the accused apparently has no criminal record there
are at least insinuations, he has some mental health issues and
despite those "issues" he was recruited as an informant,
who the RCMP and CSIS (not the Ottawa Police) now claim
is really not an informant but a domestic terrorist
while failing to provide disclosure.

If the Police are going to lay such charges, they have an obligation to have their initial disclosure prepared and delivered along with the arrest.

If CSIS believed he was not an informant but a terrorist, then that would have
been a package given to the RCMP that they used as the basis of their arrest.
That begs the question as to why his lawyer cannot be entrusted with that
disclosure at the earliest opportunity.

Now with respect to the Ottawa Police ( not the Federal Crown, the RCMP or CISIS)

The fact is that the Courts turn a deliberate Blind eye to the obligations of Police to provide disclosure which in Ottawa the Police will refuse to provide and or provide only when the officers are subpoenaed to attend and bring the evidence with them.

That can and does take years. In almost every contestable criminal case in Ottawa, the Police refuse to provide all disclosure and especially, disclosure that does not help their case, by refusing to provide that disclosure which forces the criminal lawyers or the accused to seek orders directing the police to provide specific disclosure.

The problem is that Judges increasingly make Political decisions, and not legal decisions that deprive the accused of their right for full disclosure.

Its the thin edge of the wedge that brings the administration of justice into ill-repute. Ethical police and Ethical Crown's do not have a problem with providing disclosure. The problem is that Ottawa is riddled with "authorities" that believe they are above the law while asking the courts to literally throw out due process.

The Police in the case are effectively asking the courts and society to "Trust us" when they cannot even comply with the most basic obligations to provide disclosure.

When the Police fail to disclose, It literally stinks to high heaven. You can actually smell the odour coming out of the court rooms in cases where the Police fail to provide disclosure. They get away with it because we have a Judiciary who refuse to ensure that the Police provide disclosure especially where it will embarrass the police or even worse, where it incriminates the police and every effort is made to cover up Obstruction of Justice by the Police.


At the same time, the Ottawa Police turn a blind eye to Domestic Terrorism by their own police officers like the Evidence Fabricating Child Abusing
Det. Peter Van Der Zander or
Marguerite Lewis a lawyer for the CAS of Ottawa who fabricates evidence, or
CAS lawyer Tracey Engleking who gets "Exparte Orders" to cover up Obstruction of Justice.

Then there is the worst of the worst, Ottawa Head Crown Attorney TARA DOBEC who stays charges against Ottawa's most dangerous criminals simply because of her Fascist policy of Gender Superiority.