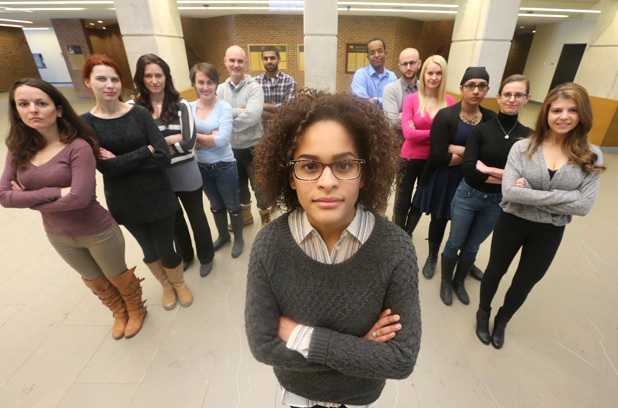 Sarah was in the midst of a bitter child custody fight with her ex when she got drug test results she feared could tip the scales in his favour.

With both partners levelling allegations of substance abuse, they agreed last spring to submit hair samples to the Motherisk Laboratory at the Hospital for Sick Children for testing.

“I had zero concerns. Sick Kids is a well-known, respected hospital,” says the 34-year-old health-care worker, who claims she has only an occasional glass of wine, and does not do drugs.

Her confidence crumbled when she got the results, which indicated she had used marijuana — at a rate, she was told, of at least three to five joints per week — in the previous three months.

“I started almost hyperventilating, because I didn’t know what to do,” says Sarah, whose name has been changed to protect the identity of her young daughter. “I was terrified.”

It would take days of pleading with Motherisk to retest her sample, and nearly a month of waiting for the results, before the lab confirmed in a letter that the analysis was, in fact, incorrect.

“(Sarah’s) hair sample should be considered negative for cannabinoids,” Motherisk manager Joey Gareri wrote in a letter last June. “It is highly likely that the initial positive finding for cannabinoids … was a false-positive result.”

According to York University’s Innocence Project, the case suggests that the problems at Motherisk may have continued beyond 2010.

Following a Torstar News Service investigation, the province appointed a retired judge in November to probe the “reliability and adequacy” of five years’ worth of hair drug tests performed by Motherisk and used in child protection and criminal cases, from 2005 to 2010.

In light of Sarah’s story, the Innocence Project is asking the province to expand the scope of the review to include more recent cases, as well as child custody battles that do not involve protection issues.

“In order to have the best and more informed perspectives on (Motherisk’s) problems, it is necessary to look at other instances where they may have made mistakes,” reads a letter sent to Justice Susan Lang last month, signed by all 12 of the project’s law students and law professor Alan Young.

“The case at hand is evidence that these problems have persisted past 2010 and that they have occurred in a variety of currently unexamined contexts.”

Torstar started asking questions after an appeal court decision in October cast doubt on the reliability of the screening test used before 2010. At the time, Motherisk’s hair drug test results were routinely accepted without challenge in courts as evidence of parental substance abuse.

The terms of the review were set after the investigation revealed that Motherisk used a screening technique called enzyme-linked immunosorbent assay (ELISA), to test hair for cocaine from at least 2005 to 2010, when the lab said it switched to a gold-standard technique for the drug.

As Torstar has reported, the literature in the field of hair testing states that results using a screening method such as the ELISA test must be confirmed using a gold-standard test before being presented in a court of law. Experts agree that this analysis should be done in a forensic lab, which has more rigorous standards than a clinical lab, such as Motherisk.

In response to questions for this story, the hospital confirmed that Motherisk used the ELISA screening method to test hair for evidence of marijuana use until May 2014.

Citing privacy concerns, Sick Kids spokeswoman Gwen Burrows said she could not discuss the case. But she said Motherisk’s switch last year to the new technique, called liquid chromatography tandem-mass spectrometry (LC-MS/MS), “was not prompted by any specific cases.”

Burrows continued to defend the reliability of the ELISA screening technique.

“Based on our proficiency testing history, the test exhibits no evidence of false-positive risk,” Burrows said, adding that retesting is considered “when results are close to detection limits.”

That appears to contradict the letter from Gareri.

Sick Kids and Motherisk “have the utmost respect to the families, their rights and vulnerabilities,” she said. “If the results of a hair test are disputed by the mother, the family or their lawyer, the test is repeated by (Motherisk) and/or by an outside laboratory.”

In Sarah’s case, Gareri said in his letter that after she disputed the findings, Motherisk retested her hair sample on-site, using LC-MS/MS technology, and sent a sample to the United States Drug Testing Laboratories in Illinois, which tested it using gas chromatography-mass spectrometry (GC-MS), another gold-standard technique. Both of those tests came back negative.

She did not explain why the lab continued using the screening method to test for marijuana use until 2014.

But the Innocence Project’s Bethany McKoy said this discrepancy “highlights the urgency” of broadening the scope of the review.

“Unless the review shows that sort of flexibility … we cannot be sure that we’re covering everything.”

Justice Lang is not giving interviews to media “to preserve her impartiality,” her counsel, Linda Rothstein, said.

Rothstein said Lang does not have the authority to change the terms of the review, which were established through an order of the Ministry of the Attorney General and “can only be expanded through a new order.”

Asked whether the attorney general would consider making such an order, spokesman Brendan Crawley said on Monday that the ministry “has not been contacted by the Innocence Project, and has no information on this case.”

Crawley said the outcome of the review will be made public this summer and “will determine whether further actions are necessary to ensure public confidence in the province’s child protection system and the operation of the courts.”

Sarah, for one, is anxious for answers. Her custody battle is ongoing.

“People need to start explaining what’s happened,” she said. “How many people has this happened to?”

About the Motherisk review

Attorney General Madeleine Meilleur has described the independent review launched in November as a first step that could lead to a much broader inquiry.

On a website created for the independent review, http://www.m-hair.ca , Justice Susan Lang said she will be meeting with scientists and organizations, but will not be holding public meetings.

In late January, she announced the appointment of two forensic toxicologists to help with the review: Prof. Olaf H. Drummer, deputy director at the Victorian Institute of Forensic Medicine and head of the Department of Forensic Medicine, Monash University, in Melbourne, Australia; and Dr. Gail Audrey Ann Cooper, an independent consultant forensic toxicologist and director of Cooper Gold Forensic Consultancy Ltd., in Scotland.

To make a submission or request a meeting with Justice Lang or her counsel, send an email to: joanna.arvanitis@m-hair.ca.

Congratulations to all the Law Students and their mentor lawyers at the Innocence Project who have given some attention to one glaring and obvious example of what is politely called "misconduct".

The Innocence Project lists unvalidated or improper Forensic Science which is what these "mother's risk" tests come under.

Mother's Risk was designed and operated specifically for the Children's Aid Society to have Evidence to justify apprehensions.

Often new born infants were snatched from mothers on the basis of just one test and then when other tests showed negative, the CAS still fabricate other evidence or omitted evidence to justify their self serving Billion Dollar fraud upon the children and parents of Ontario.

The Innocence Project is rather a diplomatic affair. It does not list amongst the causes as "Judicial Misconduct" , The only nearest reference is "Government Misconduct".

If you are a parent about to give Birth in Ottawa or for that matter anywhere in Ontario you should LEAVE ONTARIO as almost no one is safe from from that lawyers openly refer to as "The Gestapo".

All Ottawa Hospitals have a female dressed like a nurse, who looks like a nurse hanging around the birthing area. This is not a Nurse but a full time worker for the Children's Aid Society of Ottawa but paid for officially by the Hospital as a "social worker". Their main role is that of "Baby Snatching" for the Children's Aid Society
in the Multi-Billion Dollar Criminal Business of trafficking in Children under the disguise of "Child Protection".

All it takes is just One Worker to Fabricate Evidence and Omit Evidence.

The Children's Aid Society of Ottawa is Riddled with such vile examples of humanity who are professionals at Fabricating Evidence, Obstructing Justice and making what they call "Custody decisions" in contempt of the Child and Family Services Act.

ROB GODMAN is a well known Supervisor at the Ottawa CAS who might as well be called "The GodFather" for his Role in Supervising and Fabricating Evidence to Abuse Children causing far more harm than sexual abuse.

This Vile Example of humanity is a professional Criminal whose role is society is to Abuse Children and to promote murder and domestic violence by women towards men. Its all part of the Ontario Government's Fascist Program of Gender Superiority.

When it goes to Court, Rob Godman is frequently seen strutting the corridors of the Ottawa Court House at 161 Elgin Street with Marguerite Lewis, a lawyer for the CAS Ottawa who personally Fabricates Evidence. These two Criminals make up Bonnie and Clyde team of Domestic Terrorists who leave an incredible trail of destroyed lives, marriages and children.

Marguerite Lewis has the nick name "The Baby-Snatcher" and recently her Personal Fabrication of Evidence and Obstruction of Justice was investigated by the Ottawa Police. File # 1372534 by a Sgt. John Gibbons who concluded that "She lied to the Judge, its perjury". Despite incontrovertible documentary evidence that Marguerite Lewis Fabricates Evidence and obstructs justice, when it went to court, the charge was Stayed before the first hearing by Ottawa Corrupt Head Crown Attorney Tara Dobec who spends her time prosecuting male victims of domestic violence and staying charges against women who attempt to murder their husbands despite other Crown Attorney's approving charges.

The CAS Ottawa get away with this "Domestic Terrorism" because they are entirely unaccountable and Protected by even worse Scum of Society, the Former Lawyers for the Children's Aid Society who become Judges of the Ontario Superior Court.

The Judges Chambers of the Ottawa Ontario Superior Court is a virtual Club House for former lawyers of the CAS like Timothy Minnema, Jennifer Belishen just to name two of Ottawa's professional Rubber Stamps.

To give parents a reality check. The Dishonourable Tim Minnema was formerly a lawyer for the notorious Children's Aid Society of Kingston. He was and probably still is a member of the Dutch Reform Church, known for it's collaborators with the Third Reich in it's Racial Superiority against the Jews.

Now, Timothy Minnema is a prime enforcer of Ontario's Fascist Program of "Gender Superiority" where he takes children from the full time care of fathers, throws the out on to the street, slaps them with restraining orders and issues orders that are guaranteed to result in the father never seeing his children again.

Exactly the Same evidence was used by the Ottawa Police to lay charges of death threats and assault for some 55 assaults in one day. The evidence included Medical reports and audio recordings of all the assaults. The Ottawa Police officer took the precaution of having the charges screened and approved by an Ottawa Crown Attorney BEFORE they were laid.

If the Innocence Project came to Ottawa, they could quadruple the size of the team and if they worked 24/7 they could never ever keep up with the incredible trail of destruction created by Ottawa's Domestic Terrorists.