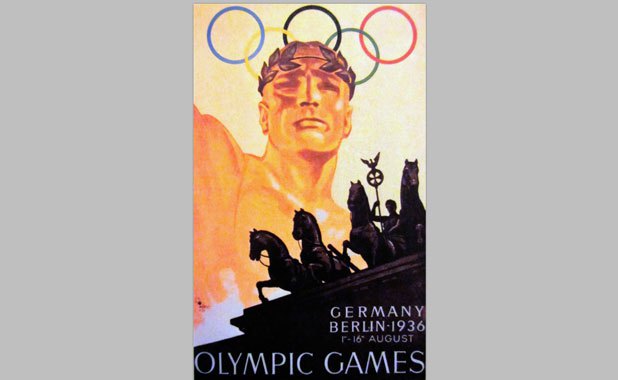 BERLIN – Berlin officials have reacted angrily to a series of fake, Nazi-style ads purporting to be part of the German capital’s campaign for the 2024 Olympics.

The spoof ads appeared last week on a satirical blog called Metronaut. Several of the ads were based on actual posters from the 1936 Berlin Olympics, which Adolf Hitler used to showcase Nazi Germany to the world.

City officials issued demands via lawyers on Monday to remove their logo and names from the ads.

Metronaut’s co-founder, John F. Nebel, says the ads were meant to spark a discussion about the darkest chapter in Berlin’s history.

That darkest chapter of Fas.cism lives on. Hit-ler engaged in a mad mad program of Racial Superiority. It was founded on "The Best Interests of the Child" an idealist expression used to this day by modern day Fascists who would even have Her Hit-ler rolling over in his grave in horror.

Hit-ler only attempted to exterminate one Racial Group, Now, in Ontario, the government is engaged in a Fas.cist Program of "Gender Superiority" that promotes Murder and Violence towards 50% of the Population who happen to be male, especially the vulnerable full time parents who happen to be male and who have

Ontario's promotion of mur.der and violence towards children and Fathers.

It got to be that way after decades of Co.rr.upt Liberal Government who slowly and insidiously, like Hit-ler, removed legal rights for fathers. Now, 99% of all cases in Ontario Courts give Custody of Children to Mothers even the most violent.

Our Ontario Fas.cist Government has for decades carefully selected the vilest example of the legal profession to be judges who are increasingly selected because they work for Ontario's Billion Dollar fas.cist Crim.inal Cartel of "Child.ren's Aid Soc.ieties".

The Dis.honour.able Timothy Minnema of the Ontario Superior court is one such former judge who now Fabricates Evidence personally as a judge. He takes children from male victims of domestic violence who are full time parents and gives them to the most violent of women who attempt to murder their husbands.

In one recent case, Timothy Minnema removed children from the care of a full time father AFTER the CAS and Ottawa Police concluded the children were safe in his care and could find "no credence" to the mother's allegations. He threw the father out of the home and slapped the victim of a murder attempt with a comprehensive restraining order.

Later an Ottawa Police detective based on the same evidence, had an Ottawa Crown Attorney screen and approve charges for threatening death and assault for some 55 assaults in one day.

Those charges were stayed by Ottawa Facist organization, the Children's Aid Society who directed that the Head Crown Attorney of Ottawa Stay the charges.

Timothy Minnema has an interesting background. He is a member of the Dutch Reform Church, who were and are notorious for their collaboration with the 3rd Reich in their program of Racial Superiority.

Then of course there was his prior employment which is almost now days an essential requirement for new judges, to have worked for

"The Children's Aid Societies of Ontario"

Ask any lawyer and they will tell you that that lawyers have another name for this fascist unaccountable Criminal organization.

Lawyers call them "The Gestapo"