Once unthinkable, and then a rebellion, common-law living is becoming the default for modern couples 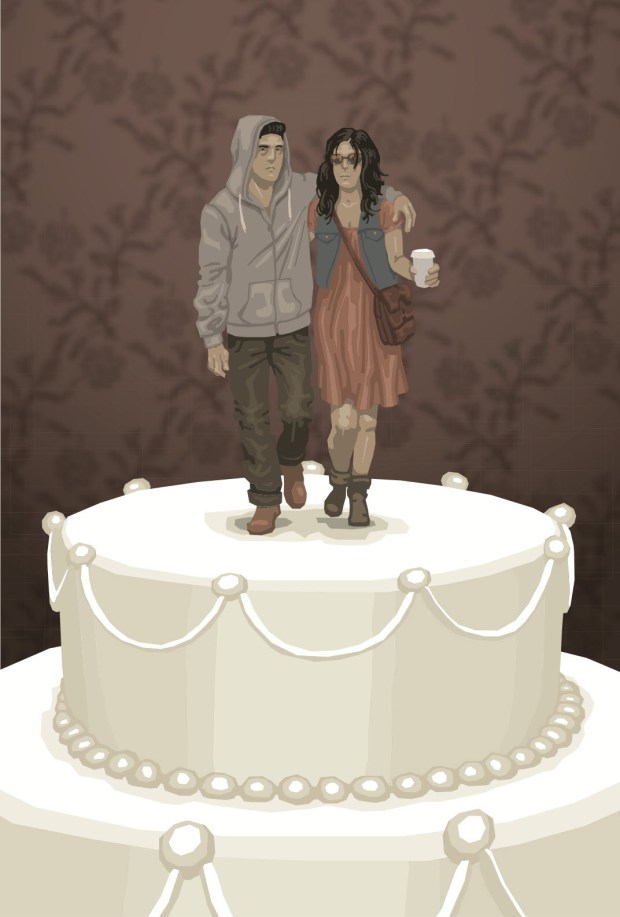 Where marriage was once expected for couples at a certain point in courtship, young people today are shacking up at such a rate that Hannah Seligson, a journalist who writes regularly on Gen Y, coined a term for the trend. Her 2010 book, A Little Bit Married, describes the now ubiquitous long-term monogamous non-matrimonial relationship.

Some of these couples will ultimately exchange vows, but a growing proportion will evolve into relationships indistinguishable from those of their legally married counterparts, complete with shared mortgages and children.

Most of us know these couples well: they live together, buy groceries together, collectively roll their eyes over requests from extended family members and argue over the correct way to fold a dishtowel. But while common-law couples are now considered an uncontroversial arrangement, blessed with society’s kiss on the forehead and the option of luxuriating in non-marriage with minimal fuss, rejecting marriage was once a deliberate bucking of society’s norms.

During the 1950s and 1960s, known as the “golden age of marriage,” a wedding was the necessary gateway to buying a home, advancing a career, having kids and playing the proper grownup.

“People who didn’t marry were typically on the fringes of society,” says Stephanie Coontz, a historian at Evergreen State College in Olympia, Wash. In 1963, more than 90% of Canadian children were born to married parents who did not live together before the wedding. Society viewed pregnancy outside of marriage as shameful well into the ’70s. A 1970 issue of Chatelaine, for example, explored the various psychiatric reasons a woman might get herself knocked up. And in a 1961 column, advice maven Ann Landers questioned whether an unmarried woman could even really love her child.

In that climate, it’s safe to say that making the decision not to marry was distinctly rebellious. When Liz Hansen, a librarian in Victoria, met her common-law partner 40 years ago, she rejected marriage to take a stand on feminist issues. “Not getting married was my decision and it wasn’t passive at all,” says Hansen, 63. “This was back when a woman needed her husband to co-sign a loan, and I felt that I could be more independent not being married.” Thirty years ago, when Maja Kaffanke (also of Victoria) and her common-law partner decided to have their first child, she dashed her family’s hopes of a wedding. But the couple had been living together for 10 years, says Kaffanke, a 58-year-old investment assistant. They were as married as they were going to get. “There was no reason to jump through that hoop,” she says.

Much has happened in the past 40 years, of course. “Things really changed in the 1970s, eased in by the mammoth sea changes of the 1960s: the pill, much easier divorce, women’s rights,” says Elizabeth Abbott, the Toronto-based author of A History of Marriage. She also notes that there is often a lag between shifts in social behaviour — for example, more and more couples living together, unmarried — and abandonment of widespread stigma. Statistics Canada didn’t even begin tracking common-law unions until 1981. The phrase “living in sin” is still used in earnest by the Vatican, but rarely elsewhere, and the rise of the individual has liberalized available family configurations. Couples now often prioritize cohabitation, kids and real estate over making things official. “Marriage is now the icing on the cake,” says Coontz. “But it used to be the cake. All of the pressures that drove people to marry in the 1950s have almost disappeared.”

Now, more than a quarter of Canadian children are born to unmarried parents. According to Statistics Canada, between 2006 and 2011, the number of common-law couples rose 13.9%, versus the 3.1% increase for married couples. Today’s couples don’t necessarily view their choice as radical or political — or even all that active. Canadians who were perhaps holding out for marriage equality had their wish granted in 2005, when same-sex marriage was legally recognized nation-wide. According to another Statistics Canada survey, the primary reason (at 33%) that people don’t want to marry their common-law partner is markedly passive: they say the “current situation is fine as it is.” (If you’re looking for another, more active reason, J. Crew recently started selling US$450 sequin wedding hot pants.)

Meghan Thompson, a 42-year-old teacher in Toronto, has been with her common-law partner for 20 years, and they have two children. She recalls a vague distaste for marriage — at least, a lack of enthusiasm — but doesn’t cast not getting married as a particularly principled decision. “Do you really decide not to do something? Don’t you have to decide to do it?” she asks. “It wasn’t an explicit rejection; we just didn’t love the idea of a wedding.” Erica Kopyto, 36, felt no pressure to marry the father of her two children. “I grew up wanting a life-long partner, children and a home, but the idea of a wedding or marriage never appealed to me,” says the Toronto-based dramaturge. “I guess I just didn’t really see the point.” Neither Thompson nor Kopyto felt any particular pressure from family members or society at large.

Now, individuals don’t need a spouse for financial independence, home ownership, procreation or even just recreational sex. If women once married to reap the financial benefits of being tied to a breadwinner, a new economic pragmatism has emerged that might help ease couples into marriage-like commitment before they consider a long-term forecast. The rising costs of living can motivate a couple to become, in Seligson’s words, “a little bit married.” “You start dating, then move in together when you can’t afford a nicer apartment on your own,” says Joanne Stewart, a partner with Lerners LLP in Toronto who has seen a recent uptick in separating common-law clients. “People now think marriage is too complex.” Premarital cohabitation has become a new rite of passage, and the economic convenience argument rings true to anyone who’s ever heard a couple justify moving in together by claiming, “It just makes financial sense.” (Although I guess it’s unsurprising that you almost never hear, “I just really want to share a bathroom with someone.”)

Regardless of how purposefully they form — whether as a broader social stand or a matter of convenience — plenty of couples find common-law relationships as rich, fulfilling and committed as a marriage, even as their justifications for eschewing the institution might shift with the times. For the record, Kopyto loves weddings, has been a bridesmaid many times over and even enjoys the occasional wedding-themed TV show. But for her, with her household of four already snuggly settled, there’s just no incentive to marry. “Except that we don’t have an olive fork,” she says. “I figure that’s the type of thing you can only register for.”

Commentary by the OttawaMens Centre

A poor article. The Government as a result of radical feminist cult ideas had poisoned the institution of marriage that now poses Canada's greatest economic and social threat to the future with the obvious result of a declining birth rate.

Its about the Feminist Ideal of using men for financial support and forcing fathers into virtual slavery.

In Ontario, Police like the Ottawa Police habitually Fabricate Evidence against any man who dares to report domestic Violence.

One Detective Peter Van Der Zander recently was caught fabricating evidence to NOT charge a female dentistry student who attempted to strangle to death a full time father.  Despite his removal and another detective charging her with death threats and assault for 55 assaults in one day, and the charges being screened by a Crown Attorney, a corrupt head Crown Tara Dobec Stayed the charges at the request of Ontario's Criminal Organization called the Children's Aid Society who, get Billions of Dollars for Free Legal Services to promote violence against fathers and children.

And they wonder why the birth rate is decreasing.

It's time the Government adopted a legal presumption of equal parenting and guarantees equal rights for men under the law instead of the present Male Sharia Law or Male Apartheid that makes marriage a joke.