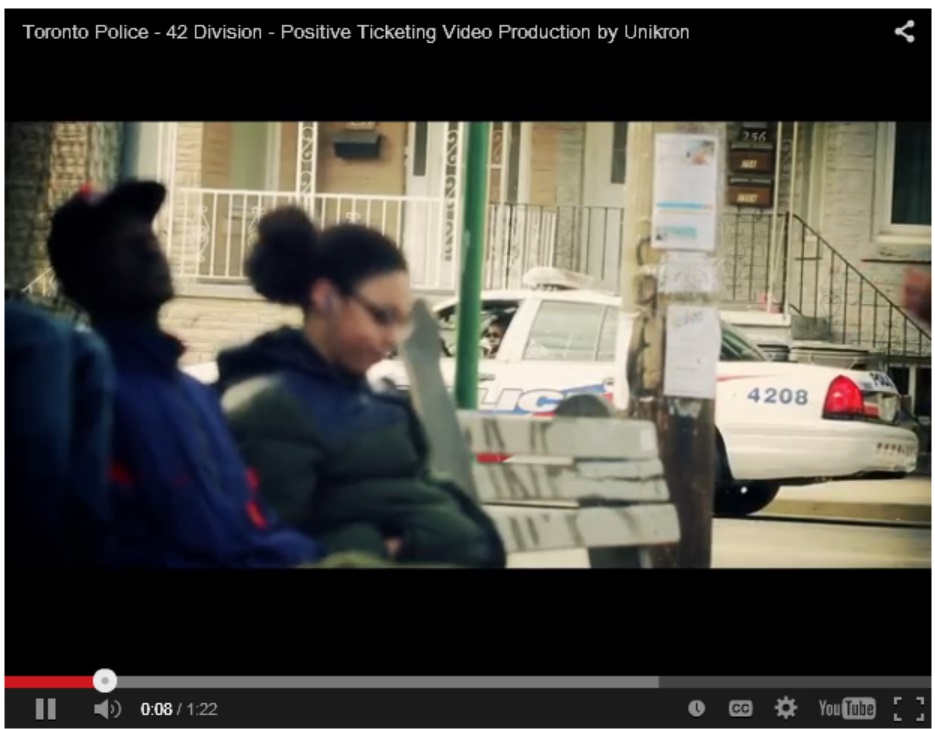 Toronto police in Scarborough’s 42 division are hoping to build a better relationship with the public by issuing “positive tickets” for good deeds.

Instead of getting a fine, positive ticket recipients will receive a coupon for McDonald’s, Pizza Pizza or Mac’s Convenience Stores. Officers can issue them for any good deed they come across. During a trial phase of the program, the tickets were issued to a man who helped officers at the scene of a car crash translate until a Mandarin-speaking officer arrived, and to a man who located a missing elderly person.

Some recipients will be invited to take a survey online in order to be entered into a draw for a larger prize.

The project is the brainchild of Insp. Dave Saunders. In the aftermath of the Eaton’s Centre and Danzig shootings, police command asked officers to think of how to make communities safer.

“When I talk about participating in public safety it’s about calling police more often when there’s drug dealers present,” said Saunders at a press conference to announce the program on Wednesday.

“It’s about being witnesses, it’s about, when you’re being victimized, not being afraid to call the police,” he said.

Keishawonna Mayenge, a Grade 12 student at Étienne Brûlé, was the first positive ticket recipient. She had called police when she noticed a man who appeared to be sleeping in his car outside of Agincourt Mall, with his car still running. He was still there as she left half an hour later, so she called 911 and performed CPR, as she was instructed. She was later told the man died of a heart attack.

The positive tickets “will definitely make the relationship between the kids—and not only the kids, but the community—with the police a lot stronger,” she said. “They’ll trust the police more.”

Lekan Olawoye, who runs Toronto’s For Youth Initiative and is chair of the Premier’s Council on Youth Opportunities, called the positive ticketing program “a good first step,” but he’d like to see a more robust, force-wide strategy for engaging youth, which should be based on feedback from those young people.

“I’m a little a skeptical,” he said in an interview Wednesday. “With any police officer stopping a young person with whom they don’t have a good relationship, it’s going to be difficult.”

Olawoye said it’s unlikely that youth, especially the most hard-to-engage, would trust the police enough to go online to give their personal information.

“There’s a lack of trust,” said Olawoye, adding that people who are used to being stopped and asked for their information may not trust or understand what police will do with the data.

Deputy Police Chief Peter Sloly said officers do not ask for any information when they first hand out the ticket and coupon, it’s only those who want to be eligible for a bigger prize who are asked to voluntarily provide any information.

The province’s information and privacy commissioner said her office is working with the Toronto Police to help ensure that its program respects people’s privacy.

“For this program to succeed, people have to be confident that, as a general rule, their data is only used for the purposes for which it was provided,” said Information and Privacy Commissioner Ann Cavoukian.

“The police have indicated that they won’t be using the data for any purposes other than to administer the Positive Ticketing program. I think that this is a critical commitment, particularly for a program whose purpose is ‘to build stronger relationships with the community and break down barriers that get in the way of communication and trust.’”

First, the Police of Canada could end their immunity to criminal liability and make themselves accountable to the public.

There is a terrible odor emanating from police cells and jails, its the smell of fear, intimidation, terror, domestic terrorism by the likes of Rotten Cops like Detective Peter Van Der Zander of the Ottawa Police who personally fabricates evidence to NOT charge women who are encouraged by our Rotten Stinking Cops to murder and assault fathers to gain custody of their children with the help of Canada's Domestic Terrorists called Police.

Inspector Dave Saunders, could simply tell officers to spray themselves with Channel 5 perfume but that wont stop the stench created by these Domestic Terrorists hell bent on abusing male victims of domestic violence.

That stench of terror is also overpowering in the Superior Courts of Ontario where Rotten Corrupt Judges are recruited from the Domestic Terrorist Cartel of Children's Aid Societies lawyers.

One Marguerite Lewis of Ottawa is about to be made a judge, and her primary qualification is one of being able to terrorize and abuse children while promoting child abuse, murder and domestic violence by women towards fathers.

Canadian Police have next to no accountability and are in effect Criminal Organizations undermining the Rule of Law and no amount of "nice tickets" will overcome the putrid odour created by sheer terrorism by those who betray their duty to serve and protect the law.