FBI informant with a sordid past busted in Key West, cops to charges

BY ANTHONY CAVE AND TREVOR AARONSON 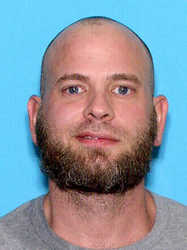 Robert Childs say he was trying to start a new life in Key West.

A child rapist turned FBI informant who was arrested in Key West for fraudulent use of a credit card and failing to register as a sex offender has struck a plea deal with Monroe County prosecutors.

Robert Childs, 39, has been out of jail and back on the streets of Key West since Jan. 28. Florida Department of Law Enforcement records show he has a temporary address at the Keys Overnight Temporary Shelter on College Road in Stock Island.

Childs pleaded guilty on Jan. 27 to fraudulent use of a credit card and no contest to failing to register as a sex offender. As part of the plea agreement, County Judge Wayne Miller issued an order finding that Childs is a sexual predator -- a designation that requires conviction of a felony sex crime involving a minor.

Childs is now registered with the FDLE as a sexual predator, records show. He is bald and has a full beard, based on a mug shot taken earlier this month. Before moving to Florida, Childs had a full head of hair and was clean-shaven, previous arrest photographs show.

Key West police arrested Childs on July 4, 2014, after he rang up five transactions totaling $863.11 on a stolen American Express card at Johnny Rockets, where he had worked for about two months. The arresting officer, Janeth Calvert, then discovered that Childs had not registered as a sex offender as required by law.

As the Florida Center for Investigative Reporting discovered, Childs had been paid $90,000 for his work as an FBI informant in a controversial counterterrorism sting operation in Seattle.

Recording hundreds of hours of conversations, Childs led two mentally ill men -- Abu Khalid Abdul-Latif and Walli Mujahidh -- in a plot to attack a military recruiting station. As part of the sting, the FBI provided everything the trio needed for the plot, including the weapons.

A Human Rights Watch report last July criticized such FBI stings for targeting "particularly vulnerable people, including those with intellectual and mental disabilities and the indigent."

Childs had reason to want to see Abdul-Latif behind bars. He owed thousands of dollars to Abdul-Latif and had tried to woo his wife away, according to Binta Moussa-Davis, Abdul-Latif's wife.

The FBI has a decade-long history of employing criminals as informants in counterterrorism cases.

In a case outside New York City that targeted four men who became known as the Newburgh Four, the FBI informant was a fraud artist who had fled Pakistan facing murder charges. Closer to home, in Miami, the FBI employed a Lebanese man, who had been charged with beating his pregnant girlfriend, in a counterterrorism operation that targeted a group of men who became known as the Liberty City Seven.

In an e-mail interview after his release from the Stock Island Detention Center, Childs took exception to descriptions of him as a child rapist in previous articles by the Florida Center for Investigative Reporting and the Keynoter.

"My charges and convictions, though inexcusable, resulted in my distorted thinking that it was OK to have a relationship with younger girls," Childs wrote.

Childs said he became an FBI informant because he wanted a fresh start. The Seattle police and the FBI told him that they would clear his record of child molestation and child rape if he cooperated as an informant, he said.

"After the arrests were made, I was expecting to receive my pardon," Childs said. "Instead, I was told that they couldn't do that for me. What they offered me was money."

Records from Washington state obtained by the Keynoter show that Childs had a troubled past. In 1996, Childs, then 20, described his relationship with a 15-year-old girl to King County detectives, also delving into his sexual history.

"I've been sexually active since I was 11," Childs told investigators. "I could not separate each exact event that took place with each person."

Earlier, in 1994, a King County prosecutor wrote that Childs befriended a group of students at an area high school. After visiting a friend's house, Childs locked the door and raped a 14-year-old girl, records show. According to the prosecutor, Childs pinned down the girl, removed her pants and told her it would "be alright."

Childs later told police he had consensual sex with the 14-year-old.

FBI spokesman Michael Leverock could not confirm or deny whether Childs is or ever was an FBI informant. Nonetheless, Childs said he came to the Southernmost City for the same reason he got involved with the FBI -- to start fresh.

"Some people come to Key West looking to find something. Others come seeking to get away from something," Childs said. "I was doing both."

The Florida Center for Investigative Reporting is a nonprofit news organization supported by foundations and individual contributions. For more information, visit fcir.org.

Here is a classic example of how desperate and dangerous police can be if given absolute power and specifically, immunity from prosecution of criminal offences.

Its a tradition practiced in Ottawa Ontario that makes Ottawa

the Capital of Organized Crime in the form of the