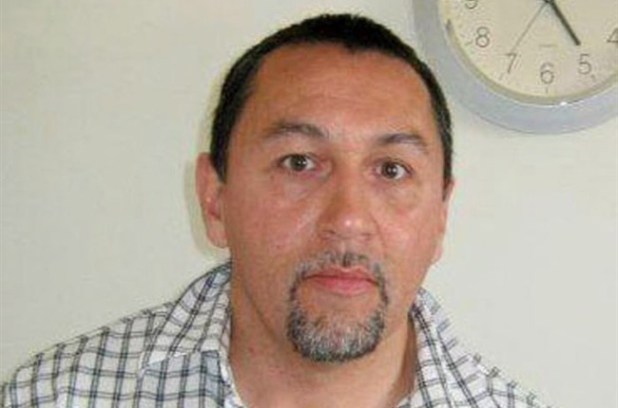 This undated image provided by the RCMP shows Michael Sean Stanley, a sex offender who recently fled Canada. A high-risk sex offender who fled Canada for Seattle has been arrested in the rape of a 69-year-old woman, authorities said Monday.THE CANADIAN PRESS/AP/Royal Canadian Mounted Police

SEATTLE – A high-risk sex offender who fled Canada for Seattle has been arrested in the rape of a 69-year-old woman, authorities said Monday.

Michael Sean Stanley, 49, made news reports in 2013 when he cut off an electronic-monitoring ankle bracelet and crossed the U.S. border unchallenged. He’s a U.S. citizen, and American authorities said they had no reason to arrest him. Canada decided not to ask for his extradition, and he registered in Seattle as a sex offender.

Stanley, formerly of Edmonton, had a criminal record in Canada that dated back 25 years. Before he fled, he had most recently served 32 months for luring two mentally challenged boys into an apartment, lighting a crack pipe, blowing smoke in their faces and then sexually assaulting them. Parole board documents also described a case in which Stanley broke into an elderly woman’s apartment while she was sleeping and sexually assaulted her.

The King County Sheriff’s Office said he was arrested last Friday morning after entering the woman’s home, in the Skyway neighbourhood south of Seattle, through a window. No weapons were used, but the victim sustained what the sheriff’s office described as minor injuries.

Prior to that, authorities said, Stanley had been meeting his requirements as registered sex offender, including checking in weekly as required and providing an accurate account of where he was staying each night.

Stanley, who is homeless, was scheduled to make an initial court appearance Monday at the Regional Justice Center in Kent, where he was expected to be represented by a public defender, said Dan Donohoe, a spokesman for the King County Prosecutor’s Office.

Stanley ran into trouble soon after arriving in Seattle in fall 2013. He was arrested on misdemeanour charges of harassment and resisting arrest after he threatened someone who asked him to be quiet. He was sentenced to seven months in jail.

The very worst child abusers who harm children more than those who engage in sexual abuse of children receive billions of dollars of government funding and remain totally unaccountable.

You can meet one of Canada's worst Fabricators of Evidence and Child Abusers strutting around the ground floor of the court house at 161 Elgin Street Ottawa with her partners in the crimes of child abuse.

Marguerite Lewis was investigated by the Ottawa Police on allegations of Fabrication of Evidence and Obstruction of Justice. After reviewing documentary evidence of transcripts, Sgt. John Gibbons of the Ottawa Police concluded "She lied to the judge it's perjury".

The Ottawa Police however dropped that investigation upon a phone call with another Child Abusing Criminal of the Ottawa Children's Aid Society, Tracey Engleking.

When the charges finally went to court, they were stayed by Ottawa's head crown attorney, Tara Dobec who just loves staying charges against Females who commit criminal offences against children and or male full time parents.

As for Tracey Engleking, she abuses children by illegally seeking and obtaining orders to abuse children directly from judges without notice to the parties.

The Judges of 161 Elgin Street Ottawa are composed of a cess pool of former lawyers who used to work for the Children's Aid Society of Ottawa.

Tracey Engleking like most CAS lawyers can virtually obtain any order she likes and almost any judge will giver to her no matter how criminal in nature.

Ontario Superior Court Judge Monique Metivier recently "retired" that was her way of avoiding an investigation by the Judicial Council for giving exparte orders to Tracey Engleking.

Ask your politician why the Government spends billions of dollars on unaccountable Criminals to commit criminal offences against children.