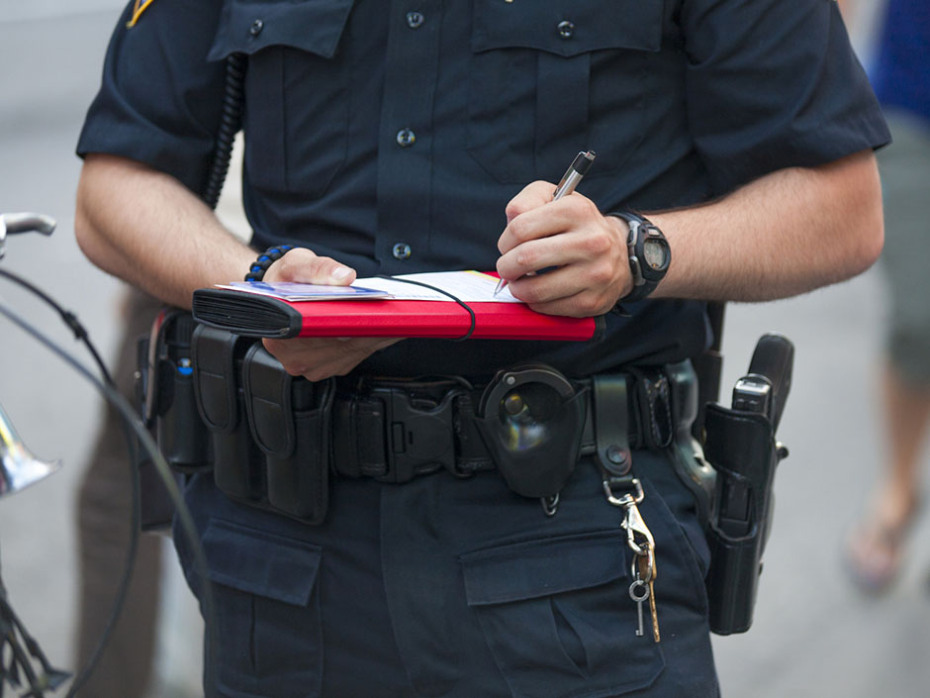 Several police departments in Canada have experimented with "positive tickets" for good behaviour.

Police in Farmington, New Hampshire, are “ticketing” people for good behaviour by giving them free pizza.

According to WMUR TV, the idea is a response to how well Farmington residents have coped with a long winter that has battered the New England region with several snow storms. (Yes, a reward for making it through winter. Forgive them; they are American.)

“We’ll be looking not only for people in violation of our laws in the state of New Hampshire, but we’ll also be looking out for people that are following the law – using crosswalks, driving properly, using turn signals,” Chief John Drury of the Farmington Police Department told WMUR.

The “citations” are coupons for a free slice of pizza or a small order of fries at a local restaurant.

The New Hampshire town is just the latest municipality to experiment with “positive ticketing,” a policing tactic pioneered in Canada.

Cops in Prince Albert, Sask., announced in November that they would start a positive ticketing campaign for youth who were caught doing good deeds like shovelling a public sidewalk or cleaning up litter. The rewards include gift cards for fast food restaurants and convenience stores, as well as movie theatre tickets.

Similar programs have also been tried in the Scarborough district of Toronto, Grand Prairie, Alta., and in Richmond, B.C., where the idea first took hold.

In 2002, the Richmond RCMP started handing out small rewards for good behaviour as part of an effort to engage the community in a non-confrontational way, with the hope of making it easier for people to co-operate with police during investigations.

Ward Clapham, the retired RCMP officer who launched the Richmond program, says he was motivated by a desire to change how cops were perceived, especially after his work in First Nations communities where interactions with police often took place against a backdrop of tragedy.

They would say, ‘Cops are hunters.’

Writing about positive ticketing in The Guardian in 2013, Clapham said he was “haunted” by what many schoolchildren told him about cops.

“They would say, ‘Cops are hunters.’ I thought they meant game hunting, so I told them I didn’t hunt animals,” Clapham wrote. “‘No,’ they said. ‘You hide in bushes and jump out. You hunt people – you hunt kids. You take our mommies and daddies away to jail.'”

Clapham says his RCMP detachment handed out about 40,000 positive tickets a year and credits the idea, along with several other outreach initiatives, with a 50% drop in calls related to incidents involving youth. The RCMP’s positive ticketing program in B.C. is still in effect today.

Ontario Police are amongst the worlds most korrupt. In Ottawa for example, their budget is around $400 million dollars and 75% is spent on their Fas.cist department called "Partner Assault" that promotes violence by women towards men.

In Ottawa any male who reports violence by a woman is more than likely to end up being charged and "Rotten Cops" like Sgt. Peter Van Der Zander Fabricate Evidence to NOT charge violent females.

The Ottawa Police fail to provide disclosure, work with Corrupt Crown Attorneys like Tara Dobec to Stay Charges against the most violent of female offenders and Extreme Feminist lawyers like Marguerite Lewis of the Children's Aid Society of Ottawa who fabricates evidence to provide literally millions of dollars in free legal services for women who assault children and partners.

While we have a Fas.cist Korr.upt government that actively promotes unaccountability for government funded criminals such as Police and the Criminal Cartel of Children's Aid Societies, our society will continue to despite and hate the police who are the authors of their own reputations as State Funded Terrorists.

Free Pizza?  That's an attempt by Ontario's "black shirts"  to divert attention from their own Criminal operations that apply a Gender Superiority Program that parallels that of the 3rd Reich