Galati, a thorn in Ottawa's side, and Groia, recently convicted of incivility by the Law Society, will be part of the group setting policy for Ontario’s lawyers. 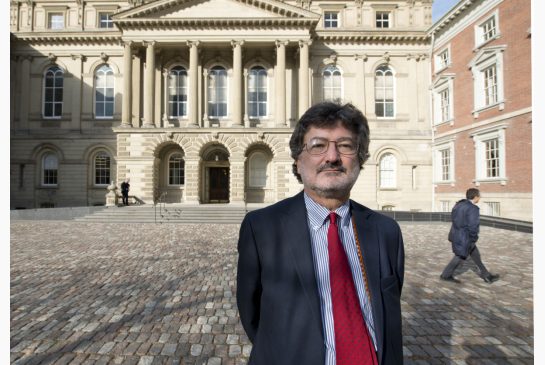 Joe Groia, recently convicted by the Law Society of Upper Canada of being uncivil to fellow counsel while successfully defending fomer Bre-X geologist John Feldherhof, has been elected a bencher to the same organization.

By: Jacques Gallant Staff Reporter, Published on Fri May 01 2015

One was convicted for “incivility” — essentially being rude — in the courtroom, while the other relishes a good fight with the federal government.

Both lawyers, Joseph Groia and Rocco Galati, are variously described by their peers as scrappers who never shy away from a legal confrontation with powerful institutions, and as outliers unafraid to shake up the status quo.

This week, they joined the establishment when they were elected as benchers of the Law Society of Upper Canada, where they will help set policy for the regulatory body and perhaps even sit on disciplinary panels.

But don’t expect them to change, now that they’ve come into the fold.

“I’m going to go out on a limb and say I’m the only (new bencher) who has been convicted of professional misconduct,” Groia told the Star in an interview Friday.

Groia is famous in legal circles for his ongoing court battle against the very society he will now help guide into the future.

Its disciplinary panel found that he displayed, in the early part of the trial of his client, Bre-X Minerals executive John Felderhof, a “consistent pattern of rude, improper or disruptive conduct” toward the Ontario Securities Commission prosecution, which had accused Felderhof of insider trading and other securities charges. Felderhof was later acquitted.

His penalty — a one-month suspension and an order to pay $200,000 in costs — has been repeatedly stayed while Groia continues to challenge the conviction, which was upheld by an appeal panel and the Divisional Court. He has now applied for leave to appeal to the Ontario Court of Appeal.

“The bencher election results speak for themselves,” said Law Society spokeswoman Susan Tonkin. “The Law Society congratulates all those elected.”

Should Groia’s application for leave not be granted, the one-month suspension would take effect and Groia would not be able to serve as a bencher during that time, she said.

Groia is an “intelligent and experienced lawyer,” former Law Society treasurer Thomas Conway, who sat on the panel that convicted him, told the Star.

“He's definitely going to be one to watch.”

His election as a bencher was a “referendum” on his prosecution by the Law Society, and shows that those who voted for him “simply didn’t agree with the Law Society’s approach to that prosecution,” said criminal defence lawyer Daniel Brown.

While Groia has made a name for himself taking on corporate Canada, Galati has carved out an image as a constant — and successful — thorn in the federal government’s backside.

He famously challenged the Harper government’s nomination of Federal Court of Appeal Justice Marc Nadon to the Supreme Court of Canada.

After the government also asked the top court for guidance on the issue, the Supreme Court found that the choice of Nadon for one of the court’s three Quebec seats was unconstitutional because he was not a member of the Quebec bar, nor was he a judge with Quebec’s superior courts.

Galati, who has also taken on deputy Federal Court judges, CSIS, the Canadian Judicial Council and, recently, the Bank of Canada, said he was “grateful” to have been elected.

“Given the slate of elected benchers, it will be an interesting four years, with the real possibility for meaningful substantive and progressive change in the profession.”

Galati told the Star in 2013: “As Canadians we prefer not to engage, and pretend that everything is OK. And it’s not.”

“He is someone who cares about what he does, and making sure that the little person is well represented … I think people want somebody who cares about the law and about the public, and I think Rocco will be a passionate voice for that.”

Forty benchers, a number of them incumbents, were elected to a four-year term by 34 per cent of licensed lawyers and paralegals. Ironically, Groia will serve as bencher alongside peers who were part of his disciplinary process.

He said he has no intention of discussing his case with fellow benchers. Groia said he’s prepared to listen, and said the issue of incivility is only one among many that he’d like to bring up at convocation, as well as access to justice.

“I’m not going to be shy about taking hard positions when they’re justified,” he said.

“Each made clear their interest in joining the leadership of the Law Society was not to further the status quo. Both are known for the energy and passion of their commitments,” he said.

“Given their profile, I think their becoming benchers at the Law Society will give rise to broader public interest in the workings of the LSUC, and create some intriguing (and I think uncharted) terrain.”

With files from Alyshah Hasham

The Toronto constitutional lawyer famously challenged the federal government’s nomination of Federal Court of Appeal judge Marc Nadon to the Supreme Court. The top court ultimately found that the appointment was unconstitutional. He claimed for years that CSIS was listening in on his phone calls with clients, and learned last year through court documents that they were in fact doing it. He’s been practising for about 25 years.

He was convicted for “incivility” in his defence of Bre-X Minerals executive John Felderhof, given a one-month suspension and ordered to pay $200,000 in costs. The penalties have been repeatedly stayed as he fights the Law Society, trying to go all the way to the Court of Appeal. His appeal to Divisional Court led Justice Ian Nordheimer to wonder why incivility is on the rise in courts, suggesting that perhaps clients believe that an aggressive lawyer is an effective lawyer. He’s been practising for over 30 years.