Const. Christian Dobbs was charged following a probe into his arrest of Raymond Costain outside the King Edward Hotel in the early hours of April 12, 2010. 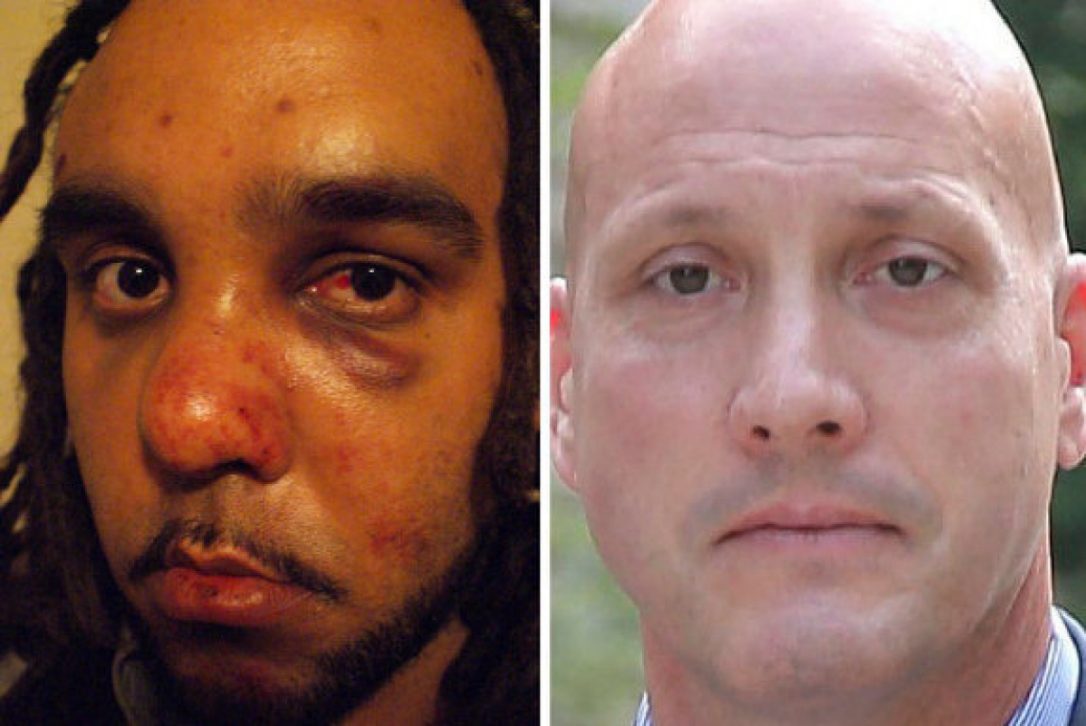 A Toronto police officer accused of using excessive force during a videotaped arrest in 2010 was found not guilty of assault by a Superior Court judge on Wednesday.

Toronto Police Service Const. Christian Dobbs, 40, stood to hug his smiling lawyers and supporters after the verdict was delivered in a downtown courtroom.

Dobbs was charged with assault causing bodily harm for the violent arrest of Raymond Costain, a 33-year-old father of three who works as a culinary technician at George Brown College. Video evidence from the dashboard camera of a police cruiser showed Dobbs hammering his arm down on Costain 12 consecutive times as he lay on the street outside the King Edward Hotel. Costain is obscured from view by the hood of the car.

Police photos taken shortly after Costain’s arrest show his face had been cut and bruised. He told the Star Wednesday he still suffers from “psychological issues” stemming from the incident.

The cop’s acquittal comes at a time of heightened anger over police violence. A series of deadly incidents involving law enforcement has roiled the United States in recent weeks. Police have been attacked and killed in Dallas and Baton Rouge, La., while images of dying black men who were shot by cops have been widely circulated online.

Toronto, too, has experienced this tension, with the Black Lives Matter movement staging protests over police presence at the Pride Parade and denouncing a decision not to charge the officer who shot and killed Andrew Loku, a mentally ill man who wielded a hammer at a west-end apartment last year. 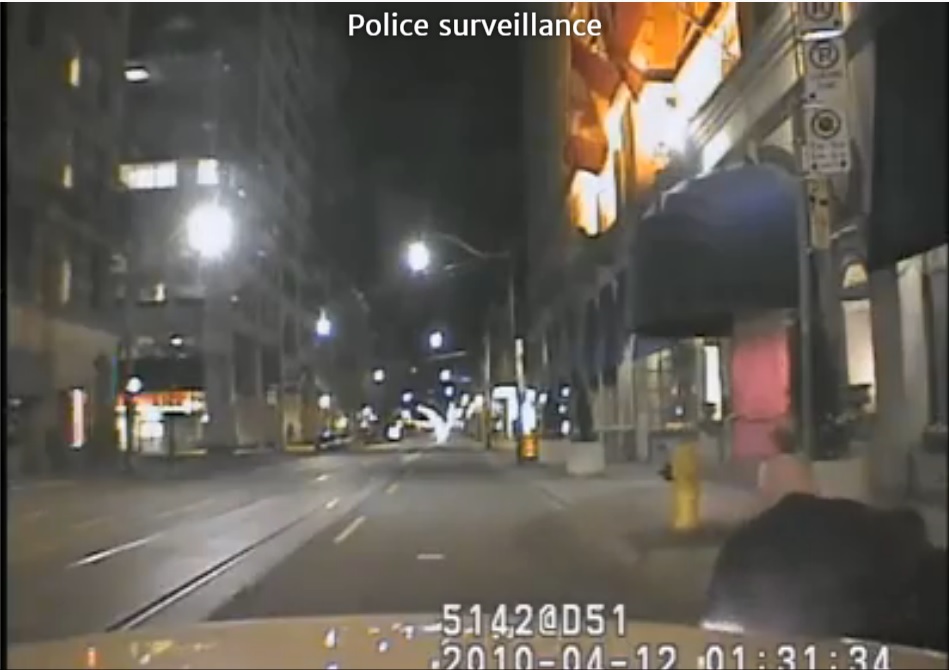 Costain, who lives in Toronto, said he doesn’t believe race played any role in his altercation with Dobbs. “I’m not trying to play the race card,” he said when asked. “That could’ve happened to anyone.”

The crowded courtroom was subdued before Justice Bonnie Croll’s verdict, with the silence broken only by the whoosh of the air conditioning and the sporadic rustling of paper. Dobbs sat at the front of the room in a dark suit. When Brauti entered in his legal robes, Dobbs stood to greet him. “How are you feeling?” Brauti asked.

Dobbs quietly uttered, “Good,” and moments later, in Croll’s reading of her verdict, it was clear he would be acquitted.

Croll concluded that Costain’s testimony was unreliable and contradictory, with differing accounts of how much he drank that night, as well as his lack of memory about a highway collision before the arrest. She added that although the “optics” of the arrest video are “shocking,” it doesn’t prove the officer’s guilt beyond a reasonable doubt.

“There are serious issues about Mr. Costain’s evidence,” the judge said. “One must conclude that an oath to tell the truth is meaningless to Mr. Costain.”

Costain said after the verdict that any changes in his version of events over the years can be explained by the amount of time that passed since the incident.

“I’m disappointed,” he told the Star. “I was kind of hoping people would be held accountable.”

The legal saga stretches to the early hours of April 12, 2010, when Dobbs took down Costain outside the historic hotel on King St. E. Costain originally faced charges that included impaired driving and resisting arrest. But those allegations were stayed in March 2013, when provincial court Justice Ford Clements delivered a searing condemnation of police actions on the night of the arrest.

Clements ruled that Dobbs used “unnecessary, unjustified and excessive” force in arresting Costain and that the officers who testified against Costain seemed “indifferent to the truth.” Clements said, “This is unlawful extrajudicial punishment that will shock the public.”

During that second trial, Dobbs testified that he believed Costain had tried to run down a police officer in his car and that he may have had a weapon. Croll ruled both assertions were reasonable given what the constable knew at the time.

As Croll outlined, Costain was stopped by police after he parked his badly damaged car outside the hotel and tried to hail a cab. Costain testified that he had been drinking, and that his car was struck from behind in a hit-and-run accident, Croll said.

Dobbs, meanwhile, testified that there was a call on the police radio that a damaged car driven by a black man was speeding dangerously down Yonge St., Croll said. Dobbs and his partner found Costain outside the King Edward and approached to make an arrest, Croll said.

Dobbs claimed that Costain refused his demand to “get down” and took a swing at him, which Costain denied, Croll said. Dobbs then struck Costain twice, brought him to the ground and delivered 10 consecutive blows, followed by a pause and then two more, Croll said. The dashboard camera video shows the 12 strikes.

Dobbs’s defence lawyer argued this was in line with his “pain for compliance” training, as Costain was resisting attempts to put him in handcuffs, Croll said. Dobbs testified that he used “elbow strikes” near Costain’s left shoulder area, Croll said.

In her decision Wednesday, Croll rejected the Crown’s argument that Dobbs’s body would have been jostling in the video had Costain been resisting arrest. She compared a freeze-frame analysis of the video to “Monday morning quarterbacking,” and said the video leaves “an evidentiary vacuum” around what Costain was doing as Dobbs rained blows on him.

Leora Shemesh, who represented Costain at his trial in 2013, said she wasn’t surprised by Wednesday’s verdict. “The record that was put before Justice Croll ended with a credibility contest between Costain and a police officer,” she said. “They were really two different trials — same conduct, but just displayed quite differently.”

Brauti welcomed Croll’s verdict and echoed her statement that the video provided an incomplete picture of the incident. “It showed slivers of what took place,” he said after Wednesday’s verdict.

Several metres away, Costain stood in the shade of some trees in his grey suit. He said he felt let down by the judge’s decision, but admitted some relief that the case had ended.

“I’m just going to continue to focus on my kids and my career,” he said. “It’s been a long run.”

With files from Peter Small