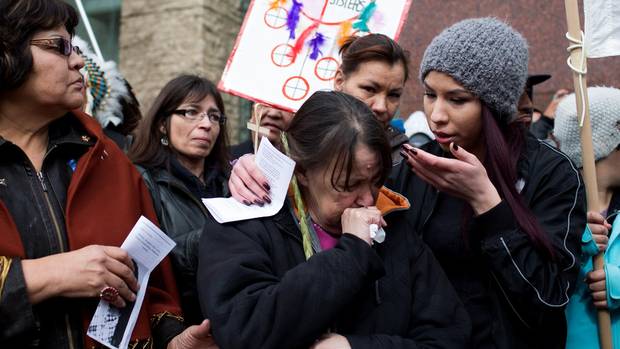 The appeal of the acquittal in the 2011 death of an indigenous woman risks treading into the sex lives of consenting adults, the defence argues in a written submission that also says the Crown is backtracking on earlier positions so it can get a second chance at a conviction.

On Sept. 6, a panel of three judges will hear the appeal in the case of Cindy Gladue, a 36-year-old mother of three who bled to death in an Edmonton motel bathtub after a paid sexual encounter with Bradley Barton, an Ontario trucker.

Mr. Barton’s acquittal on March 18, 2015, provoked rallies across the country, with protesters saying the indigenous sex worker was the victim, in her death, of racism and prejudice. There was widespread outrage over the judge’s unprecedented decision to allow Ms. Gladue’s vaginal tissue to be brought into the courtroom as evidence.

Calling Ms. Gladue’s death “shocking and appalling,” the Crown appealed the verdict and filed its arguments in the fall. Its key assertion is that the judge only outlined three scenarios in which Mr. Barton could be found guilty of manslaughter when, it now contends, there was a fourth.

On July 13, the defence submitted its 51-page response, arguing that the prosecution agreed at trial there were three paths to a manslaughter conviction.

The murder trial turned on what caused a fatal 11-centimetre-long wound to Ms. Gladue’s vaginal wall, with the Crown arguing Mr. Barton either inserted a sharp object or recklessly fisted her, and the defence asserting the trauma was caused by consensual, manual stimulation similar to what Mr. Barton had done to Ms. Gladue less than two days earlier.

The jury acquitted Mr. Barton of first-degree murder and chose not to convict him of manslaughter.

Ms. Gladue’s mother, Donna McLeod, told The Globe she plans to attend the appeal hearing and hopes the Crown will prevail. “It’s stressful thinking about it – wondering if [a new trial] will happen, if this guy will walk away,” she said.

The defence’s submission says case law does not, in fact, support that argument. It contends that if Ms. Gladue consented to the sexual activity and was not too intoxicated to do so, and if Mr. Barton did not intend to harm her, then manslaughter was not committed.

Defence lawyer Dino Bottos, who also represented Mr. Barton at trial, argues in his submission that the question of consent “must ultimately focus upon whether the deceased agreed to the sexual activity that was performed upon her.”

Any other approach, he wrote, “unfairly limits a person’s right to exercise their own autonomy and personal choice.”

Although the Crown argues that the judge’s instruction on manslaughter is enough to warrant a new trial, it also asserts the following grounds for appeal: There should have been a closed-door hearing concerning the admissibility of Ms. Gladue’s sexual history; the judge made a mistake in telling the jury that Ms. Gladue’s consent during the first sexual encounter might impact Mr. Barton’s perception of her consent the night she died; and the jury instructions should not have mentioned motive.

In an interview, Mr. Bottos said the requirement for a hearing on the admissibility of sexual history is not entirely clear in the context of a first-degree murder trial. Even if a hearing had taken place, he said, Ms. Gladue’s prior encounter with Mr. Barton would have been considered relevant enough to outweigh the risk of prejudice. He also noted that in its own opening remarks, the Crown called Ms. Gladue a “prostitute” and referred to her “working relationship” with Mr. Barton.

On motive, Mr. Bottos said it was the judge’s prerogative to mention it in the jury instructions.

He pointed out that the Crown approved the final version of the instructions.

“It’s fundamentally unfair to have a Crown prosecutor agree that the law is one way at trial, and then be unhappy with the result and go to the Court of Appeal and complain about the judge misapplying the law,” Mr. Bottos said. Alberta Justice declined to comment since the matter is before the court.

Ms. McLeod said her daughter would have turned 42 on Saturday; the family will light a candle in her memory.

Cindy Gladue deserves justice which means a full investigation and, acknowledgment of  fact, that she was a disadvantaged person who did not do anything to deserve to be murdered.

The fact that she was a prostitute means that she suffered low self esteem, and most probably was a victim of other abuse that predisposed her to the final act of abuse.

The Crown is dominated by extreme feminists and across Canada cases are prosecuted with more often than not next to no corroborating evidence that was once considered essential to a prosecution based on beyond reasonable doubt.

The problem is, feminists have changed out law, bringing in a fanciful delusional level of doubt that is based on hatred, bias and without consideration of possible motivations such as financial reward or revenge just to name to two.