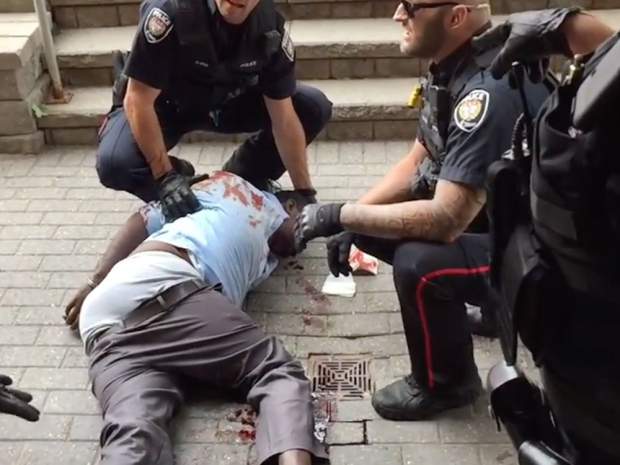 The subject officers of an Ontario civilian watchdog probe into the arrest of an Ottawa man who is now dead have been identified, and new raw video of the moments following the arrest has been posted online.

The video, which depicts 37-year-old Abdirahman Abdi already on the ground bleeding, with his pants down below his waist and his face on the pavement, was shared on YouTube on Tuesday, two days after a bloody police altercation that has sent shock waves through the community.

It’s not clear from the video, which shows only what happened while police waited for paramedics, what transpired in the minutes prior. No use of force by police is captured on video. It’s not clear if Abdi was conscious or breathing when the video was filmed.

The video shows Abdi on the ground and several officers, one of whom maintains a hand on him, around him. A group of officers and a patrol sergeant are present.

Patrol Const. Dave Weir, one of the subject officers in the Special Investigations Unit probe, is identified in the video by his name badge. Postmedia has identified the other subject officer as Const. Daniel Montsion, an anti-gang officer who responded to the call. The video appears to have been taken from behind the glass front door of Abdi’s apartment building at 55 Hilda St. The officers’ conversation is not audible and only wails from people inside the building can be heard.

The video can be seen here. Warning: the content is graphic.

While the captions on the uploaded video assert that police killed Abdi, what exactly happened on Sunday morning is currently under investigation by the SIU. What is known is that police responded to 911 calls reporting Abdi grabbing women’s breasts inside a Hintonburg coffee shop — a Bridgehead location at the corner of Fairmont Avenue and Wellington Street West, and down the street from an administrative police building at 19 Fairmont Ave.

Once police arrived, they found Abdi. Police Chief Charles Bordeleau said Monday that the man continued to be “assaultive.” He fled the area and police pursued. He was physically taken down by officers some 270 metres away on Hilda Street. Police sprayed him with pepper spray, hit him with batons and used physical force. Witnesses have described the takedown as a beating.

Police arrested and handcuffed Abdi. He is seen cuffed in the newly released video. But at some point during that sequence of events, the SIU believes he suffered “medical distress.” He was taken to hospital in critical condition, but was pronounced dead on Monday.

The SIU has designated Weir and Montsion as their subject officers.

Sources have told Postmedia that both are experienced officers who are well respected by their peers, many of whom feel for their colleagues who are currently the subject of public and watchdog scrutiny for actions that individual officers and the police union fear are being prematurely taken out of context.

Neither Montsion nor Weir has any discipline on record, according to Postmedia archives of police disciplinary hearings.

In 2008, Montsion was commended for volunteering some 514 collective hours with other police recruits to help a women’s charity while enrolled in police college.

In 2013, Weir received a commendation from his supervisor for demonstrating skill, good judgment and dedication and a high standard of police conduct or humanitarianism.

A 2005 letter of commendation from staff at a downtown homeless shelter named several officers, including Weir. A staff member wrote that they had gratitude and respect for “those officers who are assigned to deal with the many different kinds of possible volatile and sensitive issues arising from dealing with the homeless population,” a population that includes people with mental illness.

“I think that they are so criticized so much at times by people who don’t understand the situations that these devoted officers have to deal with day in day out,” the letter writer wrote.