'It's two separate conversations and not one that's applicable here,' Matt Skof says 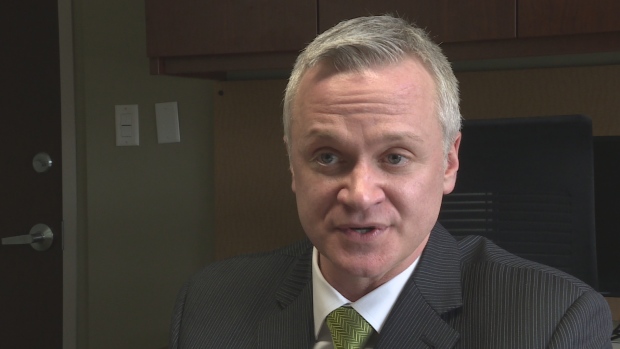 'To suggest that race was an issue in this, it's inappropriate,' Matt Skof, president of the Ottawa Police Association, said regarding a deadly incident involving a Somali-Canadian man arrested Sunday. (CBC)

As an investigation continues into the death of a Somali-Canadian man arrested by police on Sunday, the head of the union representing Ottawa police says suggestions racism could have played a role are "inappropriate."​

Matt Skof, president of the Ottawa Police Association, made the comments to Alan Neal, host of CBC Radio's All In a Day, on Monday afternoon, after Abdirahman Abdi was pronounced dead in hospital.

Abdi, 37, had been on life-support following his arrest in the Hintonburg neighbourhood on Sunday morning. Police had been called to a coffee shop for reports of a man groping people, and investigators say a "confrontation" began after police located the suspect.

Abdi had been walking on Somerset Street West carrying a foam block used to hold signs at construction sites over his head, and was being pursued by an officer with a baton to Abdi's apartment building at 55 Hilda St., witness Ross McGhie told CBC News.

Abdi had dropped the foam block and had been hit with the baton several times by the officer, who was shouting at Abdi to comply with arrest orders, when another officer arrived and "immediately" began beating Abdi about the head and face, McGhie said.

Abdi lost consciousness and vital signs at some point during the arrest and was later taken to hospital, where he was pronounced dead the following day.

Ontario's police watchdog, the Special Investigations Unit, is handling the case. An autopsy on Abdi was expected to take place Tuesday.

The National Council of Canadian Muslims, Ottawa Coun. Jeff Leiper and others have called for a thorough investigation, saying the incident raises serious questions. 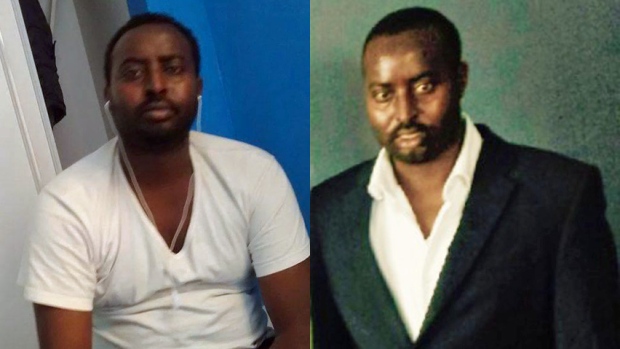 Abdirahman Abdi, 37, was a Somali-Canadian with mental health issues whose family moved to Canada eight years ago. He was pronounced dead Monday afternoon after losing vital signs during a 'confrontation' with police. (Images supplied by family)

Any suggestions racism could have played a role in Sunday's events are "inappropriate," Skof said Monday, adding it's "unfortunate" that conversations around the deaths of black men by police in the United States are entering Canada.

"I'm worried that the conversation is even occurring, to be quite candid," Skof said.

"That's unfortunate that we're seeing the bleeding of that very difficult rhetoric into Canada now. And I'm very live to it, I can obviously be sensitive to it, I'm aware that it's occurring, but it's two separate conversations and not one that's applicable here."

'We were called to a violent incident'

Skof said police were responding to a "violent incident," and that they had to contain it.

"Unfortunately this has become a conversation around a specific community, and it's a very difficult conversation to have when, at the end of the day, the police were called to an incident. ... We were called to a violent incident where we had to attend, and part of our mandate, as difficult as it is, is to ensure the safety of public, the accused, or the victim and/or the officers.

"And the use of force continuum begins, obviously, with communication, and that was occurring all the way throughout. That's always our primary focus, is to try and alleviate the situation through talking, and if that's not possible, then the laying of hands, and unfortunately a physical altercation, has to occur.

"And for the public to see that or digest it, it's difficult for them to see it." 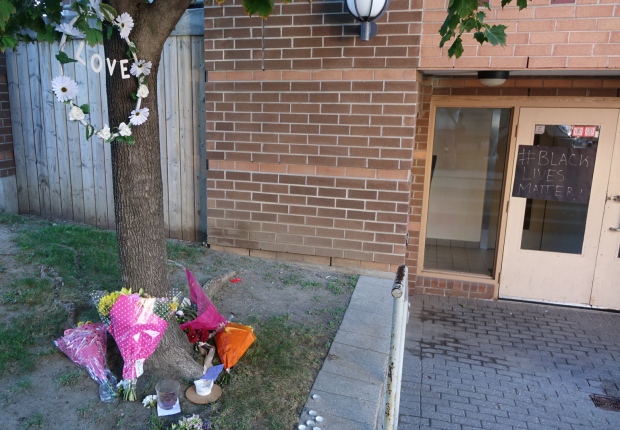 People have left candles, flowers, a Black Lives Matter sign and a "love" sign at the entrance to 55 Hilda St., where Abdi was arrested on Sunday. (Giacomo Panico/CBC)

As for whether police knew Abdi had mental health issues during the arrest, Skof said it's not the job of officers to diagnose people and that "assaultive behaviour" requires action regardless.

"It may be mental illness, it may be from an intoxicant, it could be from just a state ... at that moment, where they're incredibly upset. So to dissect it at that point, or try to diagnose, is not something that's the officer's priority. You can't sit there and say, 'Well, I'm going to diagnose this person in this second and say they're mentally ill.'"

Ottawa police Chief Charles Bordeleau, in a separate interview Monday, wouldn't comment on what the arresting officers knew, but said police get annual use of force recertification training, which includes a mental health component as well as training on de-escalation techniques.

"I'm not going to comment on the mental health issue. That's up to the SIU to determine exactly what the officers knew and when, and what they did about that. What I can tell you is that our officers do receive and need ongoing training to deal with use of force and mental health issues," Bordeleau said.

"We're also getting a lot more [training] now on de-escalation, and ensuring that we use proper techniques. So our officers do get that training. They're asking for it, and they're getting it."

'An individual's life was taken'

Amran Ali, a volunteer with the Canadian Somali Mothers Association, said in an interview with CBC News Ottawa TV anchor Adrian Harewood on Monday that she thought Skof's words were "very insensitive of him.

"I don't understand why he felt the need to do that. He could have simply said, he doesn't need to give an interview, there's an SIU investigation going on. But he felt it was OK for him, and appropriate, to go on air, and talk to Canada about how Abdirahman deserved what happened to him," Ali said.

"Up until then, I was holding it together. ... A loss is a loss, an individual's life was taken, but up until that interview, I'm not going to say I was OK, but I was able to hold it together."

Ali, who didn't know Abdi closely but visited his neighbourhood frequently, said he struggled with mental illness but didn't pose a threat in the community.

Matt Skof is the master of Police Propaganda by a Criminal Organization that refuses to accept reality and fabricates evidence because the true facts do not agree with the Fascist doctrines of Male Sharia Law of the Ontario Government.