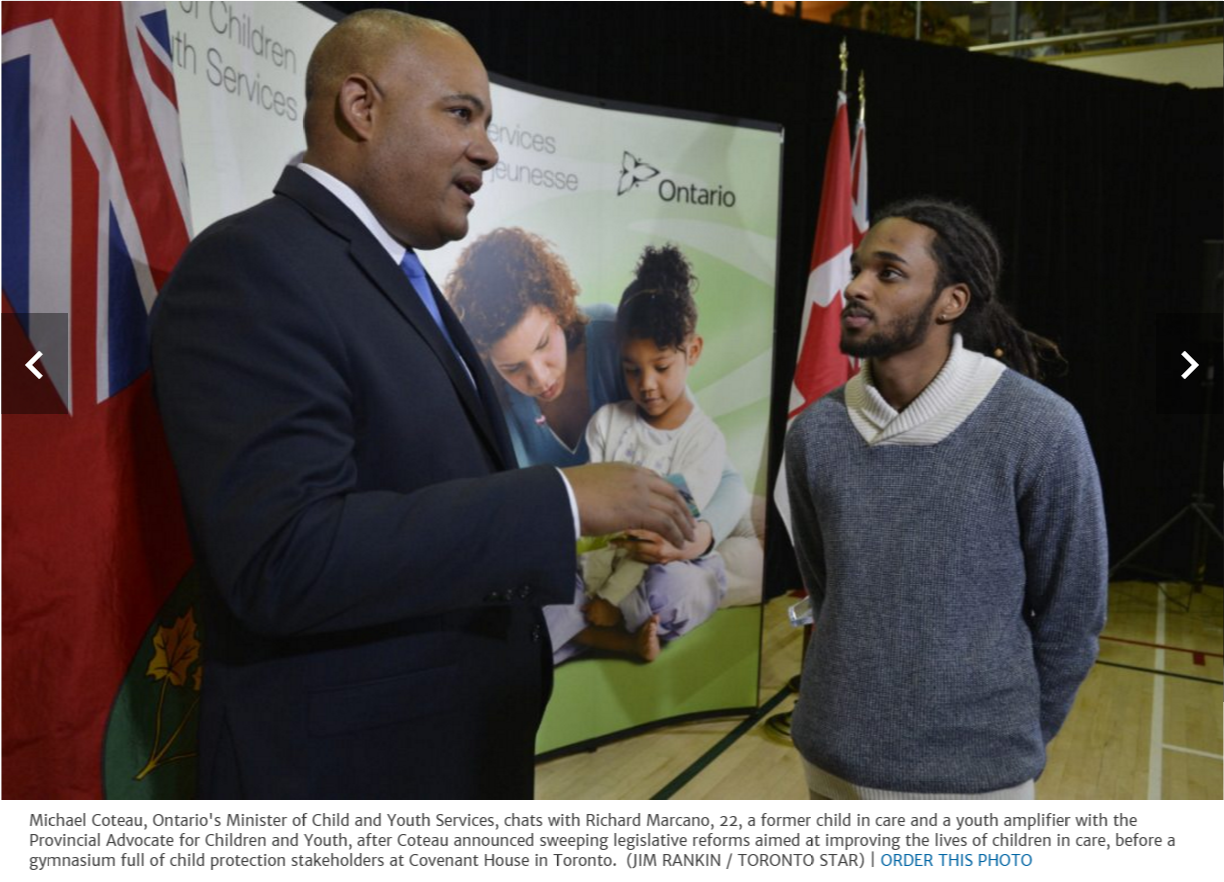 Advocates, child protection workers and youth are praising the introduction of historic provincial legislation that puts the needs of Ontario’s most vulnerable children at the heart of every decision about their care.

For Richard Marcano, 22, who grew up in the care of children’s aid, it was an “emotional” moment.

“It gives me hope,” he said. “Not just for me, but for the youth who are still in care and for the next generations to come. Youth feel like they don’t have a voice. This gives them a voice.”

Young people worked hard to bring change, added Michele Farrugia, 26, a former child in care and now a youth amplifier with the Provincial Advocate for Children and Youth.

“We fought for this. And we’re not stopping here. We will make more fundamental change,” he said at Covenant House youth shelter Thursday where Michael Coteau, minister for children and youth services, announced a rewrite of Ontario’s 31-year-old child protection law.

“I think today is a historic day for children and youth across the province,” Farrugia added.

The proposed new Child, Youth and Family Services Act, tabled in the legislature Thursday, would replace existing legislation with a modern, child-centred act, that will strengthen the rights of children and youth, Coteau said.

It will affirm the rights of children through the UN Convention on the Rights of the Child, recognize the importance of diversity and inclusion and the need to continue to address systemic racism.

The new law, if passed, is consistent with “Katelynn’s Principle” which states that children should be seen, heard and respected. The principle was a key recommendation from the inquest into the murder of 7-year-old Katelynn Sampson in 2008.

“For too long, the system has focused on problems facing children and youth and not enough on their voice, their opinions, their thoughts and their goals,” Coteau said. “This legislation is probably the most comprehensive and the biggest game-changer in child protection in decades.”

The new law would also raise the age of protection from 16 to 18, offer more help to vulnerable children and families in their homes before crises arise, strengthen oversight of children’s aid societies and make services more culturally appropriate for black children and youth.

The changes are aimed at addressing the over-representation of children from black and aboriginal families in foster care and group homes. The language will also be more respectful of First Nations, Métis and Inuit people.

“This is a testament to the young people’s courage and tenacity to not back down,” he said of his decades-long fight to raise the voices of children and youth in government corridors. “They brought Ontario to this moment.”

Coteau thanked Elman for his work on the file and the two men embraced after the news conference.

Youth representatives welcomed the government’s plan to raise the age of protection.

“This is a great change. It’s very exciting. It will help a lot of people like me,” said Macy, 23, a former Covenant House resident who left an abusive home in southwestern Ontario when she was 16 and ended up homeless in Toronto. Macy is now a first-year Ryerson University student studying to become a child and youth worker.

Currently, a youth seeking care for the first time at age 16 is not eligible for support. Raising the threshold will give all 16- and 17-year-olds access to protection services, reducing their risk of homelessness and human trafficking, Coteau said. The move is expected to help an additional 1,600 youth in its first year and would bring Ontario in line with other provinces, he added.

“It’s a step in the right direction,” said David Rivard, chief executive officer of the Children’s Aid Society of Toronto. He said he looks forward to a deeper briefing on the proposed legislative changes.

“With something so comprehensive, they’re going to need a lot of policy work,” said Rivard. “I guess my fear is they may not have enough people in government right now to do that because really it sounds like an overhaul of the whole legislation. But I think (Coteau’s) heart is in the right place and we want to support him in that direction.”

And then there is a matter of money, which was not discussed at the announcement, he added.

Youth were pleased there will be more accountability for children’s aid societies and, in particular, unannounced inspections of group homes.

“I was part of group homes where it was not good,” said Farrugia. The homes always knew when it was inspection time, he said, and had days to prepare.

“They replaced mouldy bath mats” that had been around for a year, Farrugia said. “They made sure the repairs were all done and made sure we were on our best behaviour. That’s unacceptable.”

The province will establish a working group of experts, including youth, to help the government implement the proposed legislation, the minister said.

In 2014-15, an average of 15,625 Ontario children were in foster or group-home care because of abuse or neglect from parents, and thousands more were investigated for possible protection. Ontario’s 38 children’s aid societies and nine Indigenous child well-being societies received about $1.5 billion in government funding last year.

Another tragic example of propaganda by the Fascist Government of Ontario that believes in Gender Superiority, a policy of gender apartheid that targets fathers and children and to a lesser extent, mothers who the CAS decide at first glance to remove their kids and rarely ever change their minds or their goals regardless of the evidence.

In Ontario, child protection is run by private corporations under contract to the Ontario Government. They have Government type incomes, Government style unions but NO Government accountability. Last year, they collected directly 1.5 Billion Dollars. That is in direct operating costs. The cost of their Criminal Offences is many many times that amount paid for by the citizens of Ontario and the Federal Government who had over "extra amounts" upon request without any public inquiry. They have bottomless buckets of cash to spend destroying those who they don't like and, their targets all too frequently are fathers.

Local lawyers call them the Gestapo" for good reason.

Their lawyers are notorious for fabricating evidence, and then being "anointed" as judges where they "rubber stamp" decisions regardless of the evidence.

Ontario Children's Aid Societies employ sociopaths, psychopaths and the least suitable who rise in power to maintain a fascist organization, that promotes abuse of children.

If you are a father and have a story of abuse of power by the Children's Aid Society of Ottawa or anywhere else in Ontario, drop us an email Info@OttawaMensCentre.com