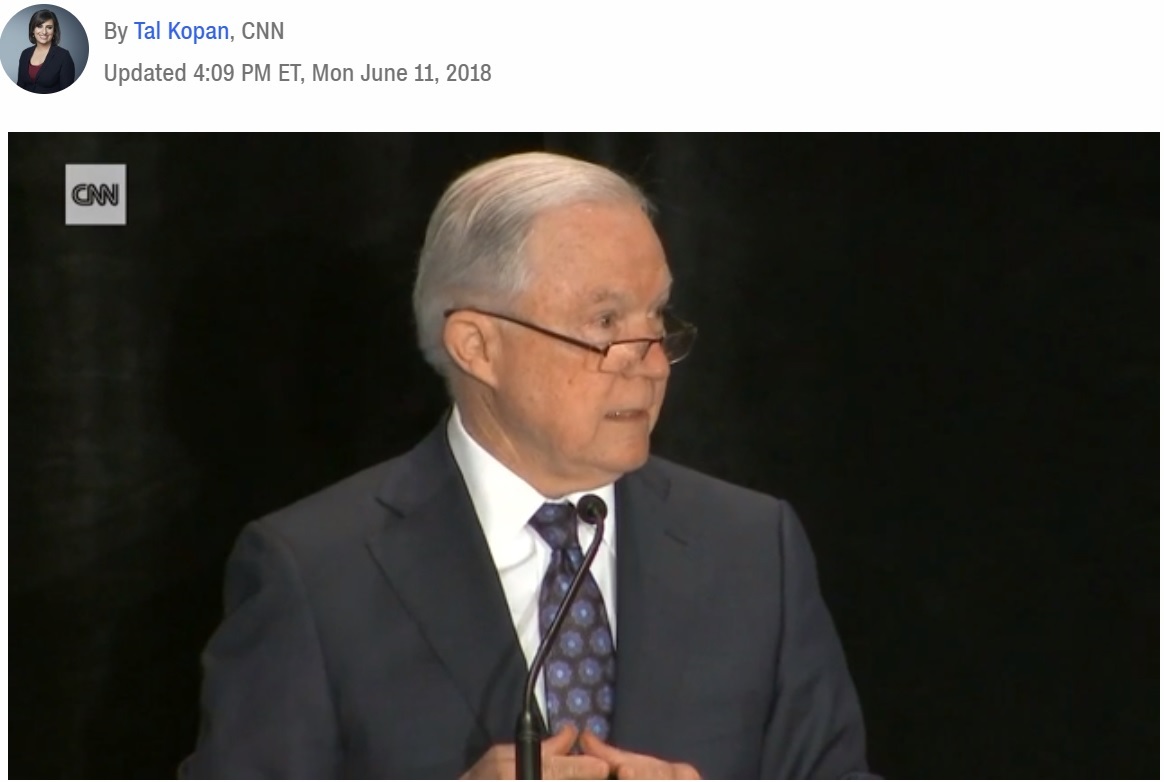 The move from Attorney General Jeff Sessions specifically addresses domestic violence victims from Central America and ruled that a 2014 Board of Immigration Appeals decision protecting such women was wrongly decided. But it will have broader implications for any victims of crime or violence in countries that can't or won't protect them -- a rampant issue in Central America and beyond.
Sessions' decision sets a high bar for victims of crime to qualify for asylum protections. Not only must the government of the home country be unable or unwilling to help the victims, Sessions ruled, but "the applicant must show that the government condoned the private actions or demonstrated an inability to protect the victims."
The ruling and announcement is the latest evidence of Sessions taking full advantage of his authority over the immigration courts -- a separate court system designed by law to be under the auspices of the Justice Department. The attorney general functions as a one-person Supreme Court in the system, in addition to hiring and evaluating the lower court judges themselves.
At issue is a part of asylum law that protects members of a "particular social group" who are victims of persecution. Immigration courts had previously held that women in Central America who because of societal norms and other restraints couldn't escape their abusive partners qualified.
But Sessions said that was no longer the case.
"Although there may be exceptional circumstances when victims of private criminal activity could meet these requirements, they must satisfy established standards when seeking asylum," Sessions wrote.
"Such applicants must establish membership in a particular and socially distinct group that exists independently of the alleged underlying harm, demonstrate that their persecutors harmed them on account of their membership in that group rather than for personal reasons, and establish that the government protection from such harm in their home country is so lacking that their persecutors' actions can be attributed to the government," he wrote.
Speaking Monday morning an annual training conference for the nation's hundreds of immigration judges, Sessions said his move "restores sound principles" of the law.
"Asylum was never meant to alleviate all problems, even all serious problems, that people face every day all over the world," Sessions said in a speech earlier Monday at an annual training conference for the nation's hundreds of immigration judges. "I will be issuing a decision that restores sound principles of asylum and long standing principles of immigration law."

Sessions received a warm welcome and reception from the judges present, who gave him multiple standing ovations at the beginning and end of his speech. But some leading immigration judges reacted unfavorably to the announcement.

President Emeritus of the National Association of Immigration Judges Judge Dana Leigh Marks told CNN it was "unsettling" that immigration judges are finding out about a precedential decision from Sessions at the same time as the public.
"While it's not a surprise that a major decision is going to be announced today, it's rather unsettling, because we feel like we're the last to know," Marks said. "And we need time to study and digest it."
Pro-immigration advocates have criticized Sessions for taking the case and targeting protections for victims they say have already been settled as a matter of law.
Sessions also touted recent efforts he's made to require judges to complete a certain number of cases per year, an effort that has been opposed by the immigration judges union who argue it trades due process rights for unreasonable expectations of completions that could encourage or force judges to issue more deportation orders.
He also repeatedly discussed what he considers abuse of the nation's immigration laws, which the judges he spoke to are sworn to uphold. He referred to the 2016 election results as a bellwether for the judges.
"Let's be clear: We have a goal. And that goal is to end the lawlessness that now exists in our immigration system," Sessions said. "The American people have spoken. They have spoken in our laws and they have spoken in our elections. They want a safe, secure border and a lawful system of immigration that actually works and serves the national interest. Thank you for what you do, let's deliver this for the American people."
Marks and current National Immigration Judges Association President Judge A. Ashley Tabaddor criticized Sessions for touting the case completion targets in his speech, as well, with Tabaddor saying two-thirds of judges are not on track for the Department of Justice's 700 cases per year target.
"We're still in labor negotiations to discuss ways to achieve more numerical completions ... we don't agree that 700 is a realistically achievable number," Marks added. "It's frustrating while we're in the midst of these negotiations to hear such a firm assertion from the attorney general. It's as if our concerns are not going to be taken seriously."

Sessions again demonstrates his contempt for the fundamental principles of justice.

fails to consider the catastrophic effects.

Its already on record, that domestic violence victims are increasingly failing to report

domestic violence. This will only encourage abuse of the vulnerable.

What his means is, Sessions believes that these victims are sub human and do not have