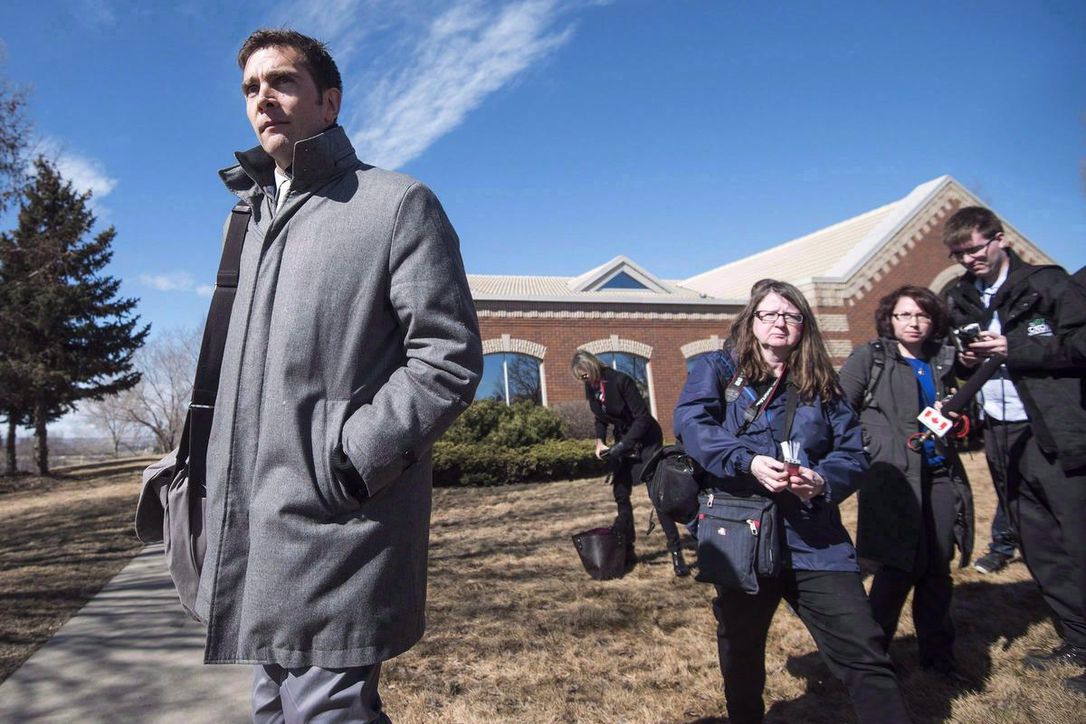 The request came in the wake of the acquittal of Gerald Stanley, who had been charged with second-degree murder after shooting Boushie on Stanley’s property near Biggar, Sask. Murphy hoped such a meeting would improve the outcomes of Indigenous people caught up in the justice system.

Chris Murphy, the lawyer for the Boushie family, shown outside the provincial court in North Battleford, Sask., on April 3, 2017.  (LIAM RICHARDS / THE CANADIAN PRESS FILE PHOTO)

Two emails were sent over the course of about two months to Legal Aid Saskatchewan’s chief executive officer, Craig Goebel, but a response never came.

Last week, Murphy found out that Legal Aid had actually complained about him to the Law Society of Ontario, the body that regulates the province’s legal profession, over comments he made about the organization during a news conference in Ottawa in February surrounded by members of Boushie’s family.

The law society informed Murphy that it had dismissed the complaint.

“Rather than sit down with us and discuss the issues, I was very surprised and disappointed to learn that this complaint had been made,” Murphy told the Star this week.

Murphy’s comments that spurred the complaint came as Boushie’s family was meeting with federal politicians, including Prime Minister Justin Trudeau, in Ottawa.

The acquittal in Boushie’s death had prompted public outrage and prompted the federal government to propose changes to the justice system, including to jury selection, as reports emerged of Stanley’s lawyers challenging potential jurors who appeared to be Indigenous. Stanley was acquitted by an all-white jury.

“In my opinion, the number-one way to change the justice system in Saskatchewan is for Legal Aid Saskatchewan to be properly funded,” Murphy said at the news conference in February.

“Right now, what’s happening in that province is there is a meat grinder that catches many Indigenous people and, before you know it, you’re on bail conditions that shouldn’t have been imposed in the first place, you’re pleading guilty to offences that you could have challenged in court had you had proper legal representation.

“It’s a cycle that keeps on going, and until Legal Aid Saskatchewan properly represents members of the Indigenous community, the cycle of injustice will continue and we'll never get to the point where the proportion of Indigenous people in jail is lessened, the proportion of people of Indigenous origin who are being systematically betrayed by the justice system in Saskatchewan will not change. They need to stand up for their clients and assert their right that they’re innocent until proven guilty and start setting trials.”

Legal Aid had further complained that “portions of such comments are unfairly critical of the Saskatchewan justice system as a whole and would therefore tend to erode public confidence in the administration of justice.”

But David Cass, an intake lawyer at the law society, found no further investigation into Murphy was warranted. He told Legal Aid that the comments were allowed under the rules, particularly the rule that stipulates lawyers often advocate for individuals and groups looking to change legislation and bring more public awareness to certain issues.

“In making those comments, he was fulfilling an important role, made all the more important by the Indigenous status of his clients in this specific circumstance,” Cass wrote.

Murphy told the Star that he was not criticizing the lawyers themselves, but the lack of resources that are invested into Legal Aid.

“It’s just that if you have a certain limited number of lawyers and only so many hours in the day, they just can’t get the job done. It’s nothing personal against the lawyers at all,” he said.

Murphy pointed out that had the complaint against him been successful, he could have been reprimanded or even suspended by the law society, which would have prevented him from formally representing his clients.

“It would appear to me, certainly if their complaint would have been successful, certainly it would have had a chilling effect on my ability to represent Indigenous people in Saskatchewan,” he said.

Murphy had first sent Goebel an email in February, shortly after the news conference, asking for a meeting between him and his Legal Aid team and Saskatchewan Indigenous leaders Sheldon Wuttunee and Bonnie Leask.

“We are hoping to have a constructive conversation about how we can work together to make things better for Indigenous people who find themselves caught up in Saskatchewan’s justice system,” he wrote to Goebel.

Having received no response, he followed up two months later, telling Goebel that he and Boushie’s family anticipated going to the United Nations Permanent Forum on Indigenous Issues, and asked for his opinion on what should be the single most important issue for Boushie’s cousin, Jade Tootoosis, to raise while at the UN. He also reiterated his request for a meeting. Again, no response.

“We strive to improve in all facets of our service delivery and readily take into account reasoned, constructive criticism, so we can make service decisions based on facts and data,” Goebel said when the Star asked why he never responded to Murphy.