One of literature’s better known bullies — Roger, of William Golding’s Lord of the Flies — delights in patrolling the beach to kick over the sand castles built by the other boys.

Many of those who apprehensively cast their votes against the Conservatives in the Ontario election saw Doug Ford in the role of a Roger, eager to tear down a series of proposed policies and established programs built over not just years, but decades. We have yet to get Premier Ford’s full measure, but early indications in the justice field give cause for concern. 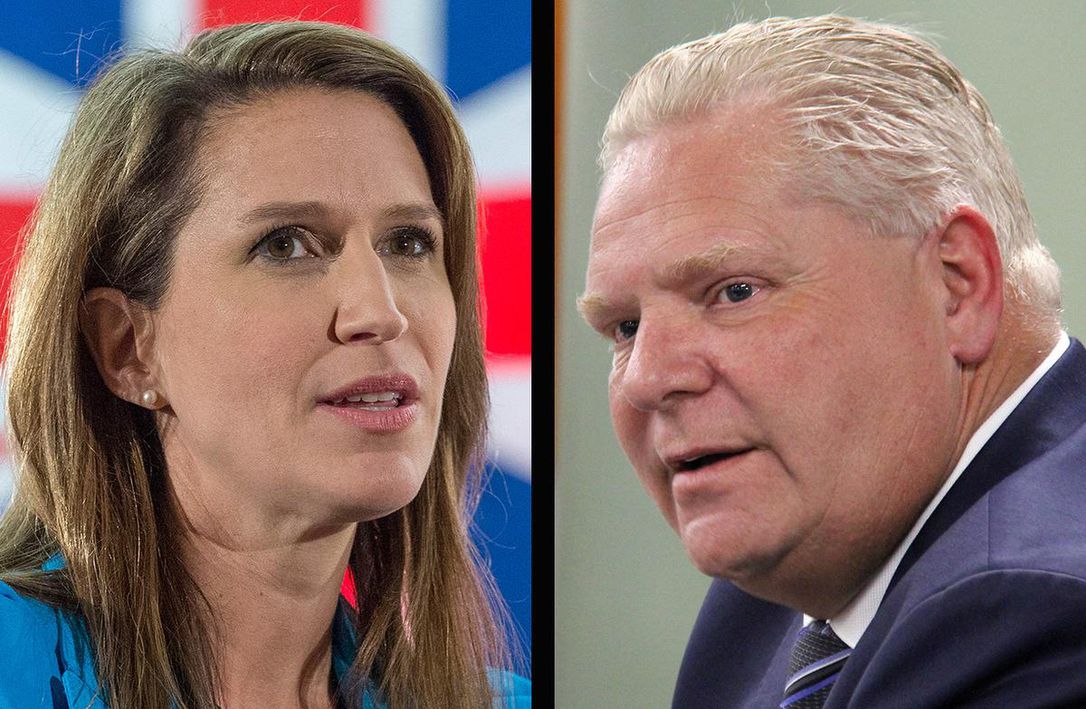 “In the justice field, much will rest on the shoulders of Attorney General Caroline Mulroney (left); a fresh face in political terms, yet one who was schooled on precepts of moderation and progressive conservatism at the feet of her famous father, Prime Minister Brian Mulroney,” writes Daniel Brown. She and Premier Doug Ford (right) “must resist pressures to prioritize ideology over evidence-based policy-making and to scrap thoughtful and important legislation simply because it was drafted by the opposition.”  (Toronto Star)
Take proposed changes to police oversight that had evolved out of Justice Michael Tulloch’s painstakingly researched report in 2017. These recommendations aimed to finally bridge a divisive, long-standing gap between racialized groups and unyielding police policy.

Yet, a mere day before a key piece of the Safer Ontario Act was due to become law, it was thrown into limbo pending what Ford referred to as “a full and thorough review of the legislation” involving experts, police services and the public.

In other words, precisely what Justice Tulloch and the prior provincial government had already done.

Enhanced oversight for police officers was a necessary response to decades of dwindling public confidence in the face of gross police misconduct that had been swept under the carpet by officers refusing to take sufficient actions to investigate their own.

The Safer Ontario Act would have accomplished much by expanding the Special Investigations Unit’s mandate, ensuring more timely investigations into police misconduct and requiring officers to participate in the SIU investigation process or face hefty fines or jail time.

If the Ford government ends up taking an eraser to the act, we will lose these and other hard-won changes that would have prevented some suspended officers from receiving pay and that were meant to ensure forensic labs are properly trained, accredited and supervised in the wake of the Motherisk hair-testing scandal.

On another front, we have seen a recent spate of gun violence strongly reminiscent of 2005’s “Summer of the Gun.” At that time, the government responded by creating the provincial Guns and Gangs Task Force. Countless multimillion-dollar gang sweeps later, precious little has been done to choke off the environmental origins of gun violence before they take root.

Investing in more comprehensive community programs to identify and divert those most likely to be attracted to the criminal lifestyle would be a far more effective and economical answer to the gun violence problem in our city than reviving unconstitutional carding practices that breed contempt and mistrust between the police and the community, as some have suggested.

The answer to this problem is also not to deny more people bail. Securing bail for those facing gun charges is already onerous because the burden lies with the accused to establish why they should be released pending trial. It is pure fantasy to suggest, as the government has, that our recent gun violence is caused by those already released on bail for other crimes.

A government committed to fiscal responsibility should think twice about unnecessarily employing stricter bail policies when it costs 40 times more to house a defendant pending trial than to supervise them in the community.

The blame for these costly failures lies squarely at the feet of political leaders of all stripes who continue to pursue the same, failed measures to address the root causes of gun crime while at the same time bowing to faulty assumptions that hiring more police and locking up suspected offenders will make us safer.

In the justice field, much will rest on the shoulders of Attorney General Caroline Mulroney; a fresh face in political terms, yet one who was schooled on precepts of moderation and progressive conservatism at the feet of her famous father, Prime Minister Brian Mulroney.

Mulroney and the rest of Ford Nation must resist pressures to prioritize ideology over evidence-based policy-making and to scrap thoughtful and important legislation simply because it was drafted by the opposition.

To provide true leadership and fiscal responsibility, the Ford government must refine and improve the sandcastle, not kick it apart.

Daniel Brown is a criminal defence lawyer and a Toronto director with the Criminal Lawyers’ Association. Follow him on Twitter: @danielbrownlaw

While Caroline Mulroney is the darling of Ontario and Federal conservatives, she does not bring the claimed "fresh attitude" that the conservatives are singing like a religious cult.

To date, she comes with a lot of "baggage" that opposes fundamental justice, that opposes logical legal reasoning such as but not limited to the most basic fundamentals of balancing the probative versus the prejucice.

Conservatives, are not "conservatives", they claim to think of the public purse, provided it is managed according to the "business interests" of their political base which is a collection of the least intelligent and the most corrupt groups in society who have vested interests in a an American style of injustice and high rates of incarceration.

To date, Caroline Mulroney displays open contempt that rivals that of Justine Trudeau for yet another politicians anointed  into a position of absolute power.

From the perspective of the front line criminal lawyers defending justice, there is no improvement expected from a conservative government dominated by Donald Trump like dogma and crazy justifications and delusions of that echo out like chants of "lock her up".

So far, Doug Ford has restrained himself but, what comments we have seen while not what we expect from a Trump syndrome candidate, do not and have not followed the mindless endless pathological lies of Donald Trump and the basket of deplorables who make up his base.

Doug Ford and Caroline Mulroney have a chance to fundamentally change Ontario, to improve justice and cut the cost to society of injustice. To do that will take innovation, creativity, and a backlash from their base that is incapable of seeing anything other than what they want to see.

Doug Ford and Caroline Mulroney have an opportunity to show that they can, do a better job than the former deplorables, the liberals who left a trail of social and legal destruction.

Our Judges have been politically appointed sycophants , the endless trail of of criminals who worked as lawyers for the various children's  Aid Societies of Ontario. The lowest forms of life that became lawyers and then, appointed by the Liberal Government to rubber stamp decisions for extreme feminists and the Children's Aid Societies of Ontario.

Doug Ford and Caroline Mulroney need to remember that men in Ontario have NO LEGAL RIGHTS and its a result of the Liberal Governments that have a fascist style of judiciary that almost never ever make a legal decision in family law but an extreme feminist political decision.

If you are male, do your duty and write to Caroline Mulroney and Doug Ford and express your concerns for their obligation to change Ontario Injustice.