Do children have a right to literacy? Attorneys are testing that question. 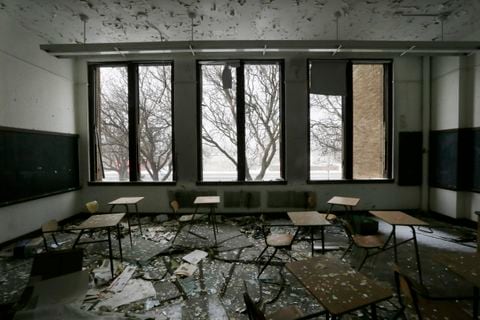 A vacant classroom at Southwestern High School in Detroit in 2015. (Carlos Osorio/AP)
by Moriah Balingit August 13, 2018

When Jamarria Hall strode into Osborn High in Detroit his freshman year, the signs of decay were everywhere: buckets in the hallways to catch leaking water, rotting ceiling tiles, vermin that crisscrossed classrooms.

In the neglected school, students never got textbooks to take home, and Hall and his classmates went long stretches — sometimes months — with substitute teachers who did little more than supervise students.

Hall was part of a class of Detroit Public Schools students who sued state officials in federal court, arguing that the state had violated their constitutional right to learn to read by providing inadequate resources.

A federal judge agreed this summer that the circumstances at Hall’s school shocked the conscience. But what is shocking, he concluded, is not necessarily illegal — even if some graduates of Detroit’s schools struggle to complete a job application.

“The conditions and outcomes of Plaintiffs’ schools, as alleged, are nothing short of devastating. When a child who could be taught to read goes untaught, the child suffers a lasting injury — and so does society,” Judge Stephen J. Murphy III wrote.

“But the Court is faced with a discrete question: does the Due Process Clause demand that a State affirmatively provide each child with a defined, minimum level of education by which the child can attain literacy?” he wrote. “The answer to the question is no.”

The case illustrated a conundrum that has vexed education advocates for decades: Neither the word “school” nor “education” appears in the Constitution, and federal courts have largely shied from establishing a special right for children to receive an adequate education. That has posed formidable hurdles for those who turn to the courts for help when their school buildings are falling down, or their children are enduring long stretches in classrooms without real teachers, or even when they see evidence of discrimination.

They argue that the ability to read and write is key to unlocking other rights — voting, applying for jobs, writing letters to lawmakers — that federal courts have held sacred. An illiterate adult is unable to participate as a full citizen in a democratic republic, they argue.

“These children are being disenfranchised,” said Mark Rosenbaum of Public Counsel, a pro bono law firm that focuses on social justice issues and is representing the Detroit students. “Children are not receiving the basic skills to participate in a democracy.”

Hall can read, but despite graduating with the highest SAT score among his classmates and being one of Osborn High’s best students, he was rejected from his dream school — Florida A&M University — and had to take a remedial writing class at a community college.

The conditions Hall and his classmates faced were not confined to Osborn: In a Detroit elementary school, a lawsuit alleges, grade-schoolers had no English textbooks and no way to access a library.

Attorneys for the state of Michigan rejected the notion that literacy is a fundamental right and argued that the court had no authority to make it one.

“Although there are many important aspects of living in the United States, the mere fact that something is important does not mean that there is a constitutional right to it,” Michigan Attorney General Bill Schuette wrote in November 2016, when he asked the judge to dismiss the case. Schuette recently won the state Republican Party’s nomination for governor.

“For example, although it is certainly important for a person to have shelter, the Constitution does not create a right to governmental provision of adequate shelter,” Schuette said.

State officials also argued that the suit failed to trace the ills of the schools to their actions. Attorneys for the children “allege unfortunate conditions in the children’s schools, but they do not provide any relationship between the conditions of the schools and any race discrimination,” the attorney general wrote in a court filing in 2016.

The right to learn to read, attorneys for the students argued, is analogous to the right to marry. In court documents, they referenced Obergefell v. Hodges, the landmark 2015 decision that legalized same-sex marriage nationwide and declared marriage to be a fundamental right.

Rosenbaum also filed suit in California, accusing the state of failing to implement recommendations that came out of a report on literacy.

The suit, which includes young plaintiffs from three schools in Inglewood, Los Angeles and Stockton, alleges that resource-deprived schools did little or nothing when children fell short of state standards. One charter school — Children of Promise Preparatory Academy in Inglewood — had entire grade levels in which no students were rated proficient on state exams. A judge rejected the state’s efforts to dismiss the lawsuit last month.

One woman, who sent her two daughters to the academy, said both brought home good grades and seemed to be doing well. But both nearly failed state reading exams. No intervention was provided to either girl.

“My daughter was passing her little spelling tests most of the time, but I didn’t know it was that bad, I just didn’t know,” said the mother, who is identified in the lawsuit by a pseudonym. Attorneys used pseudonyms for the children and their parents to protect the privacy of academic records.

The children suing in the Michigan and California cases attended schools that were overwhelmingly poor, black and Latino. For Rosenbaum, poor test scores are evidence that the state is attempting to further “subordinate” communities that already have the odds stacked against them.

The link attorneys makes between literacy and participation in democracy is hardly new. In many slaveholding Southern states, it was once illegal to teach enslaved people to read, and many states administered literacy tests to bar illiterate men — black or white — from the polls.

“This idea that we needed a literate, educated electorate dates back to before the Constitution,” said Derek W. Black, a University of South Carolina law professor. Black recently wrote a law journal article tracing the historical roots of the association between public education and the right to vote.

In the aftermath of the Civil War, Congress required Southern states seeking readmission to the Union to write new state constitutions that guaranteed suffrage for black men and the provision of public education for all. Black argues that Congress believed the two — the right to vote and the right to a public education — were inextricably bound. After all, how could a man — free or not — make informed decisions about his ­government if he could not read the ballot?

“Opening doors for everyone is not enough,” he said. “You have to prepare them with the government knowledge and the critical literacy that would allow them to effectively vote.”

While no court has recognized access to literacy as a right, many state courts have recognized that their state constitutions enshrine a child’s right to some level of education and some have tackled unequal funding. But even when judges have ruled that schools are failing to meet their obligations under state constitutions, they have not always been able to deliver relief for students. State legislatures have sometimes ignored court edicts to equalize or increase education funding, or complied halfheartedly.

Washington state’s Supreme Court ruled in 2012 that lawmakers were violating the state constitution by failing to provide enough money to schools. Lawmakers repeatedly crafted plans that the court found insufficient. In 2015, the court began fining the state $100,000 a day — money that was largely directed to education — for being in contempt.

The lawsuit ended in June — after billions had been invested in schools.