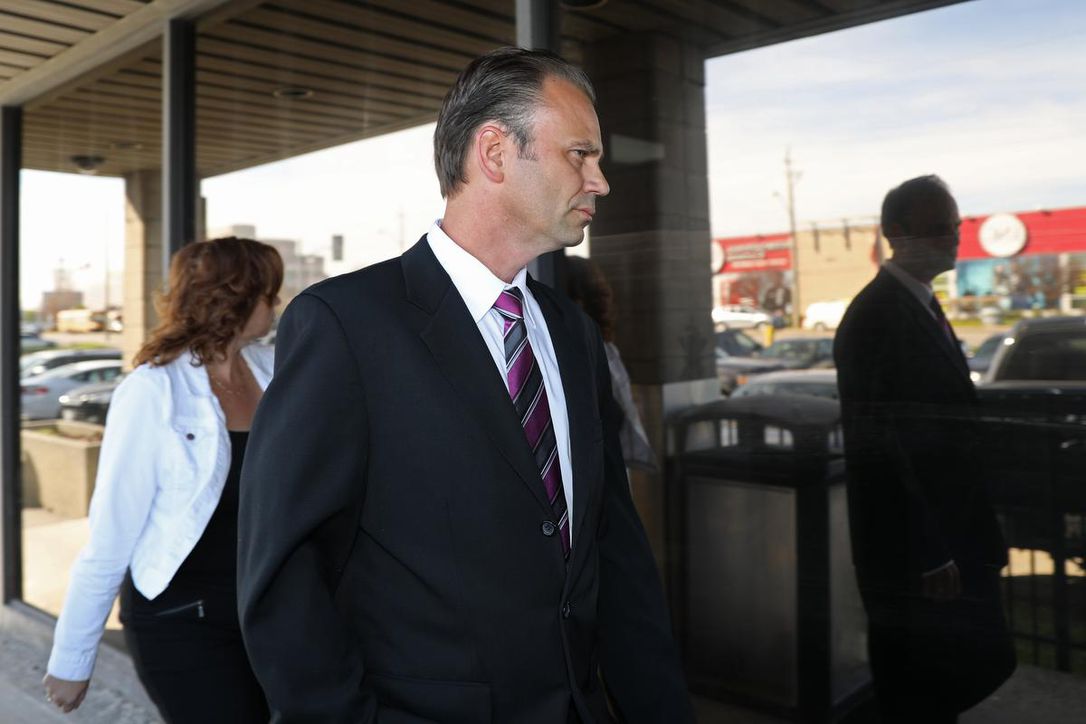 Sgt. Christopher Heard, shown in 2017, was found not guilty of sexually assaulting two women in separate incidents that allegedly occurred while he was on duty in the autumn of 2015.  (Randy Risling / Toronto Star file photo)

The complainants — both in their 20s and strangers to one another — independently came forward with what Ontario Court Justice Russell Otter called “strikingly similar” allegations. Both said Heard, 47, groped them inside a police vehicle after offering a late-night drive home from the Blue Jays Way area in the city’s entertainment district.

The long-serving police officer acknowledged on the stand that he’d picked up each woman, but denied the allegations of sexual assault. While Otter said Heard’s testimony lacked reliability and credibility, he also found problems with the complainants’ accounts, saying the inconsistencies in their testimony gave him “reasonable doubt as to whether the sexual assault occurred.”

In arguments filed in advance of the appeal hearing, Crown prosecutor Philip Perlmutter alleges Otter made a series of errors en route to the conclusion that Heard should be acquitted. He says Otter failed to factor into his decision the “improbability of coincidence” that two strangers would make such similar allegations.

“Put another way, there is no other logical explanation how complete strangers could describe in detail assaults that were identical in every respect and circumstance, unless they actually occurred,” Perlmutter wrote.

Gary Clewley, Heard’s lawyer, declined to comment and has not yet filed a response to the Crown’s arguments. Immediately after Heard’s acquittal last fall, he called Otter’s judgment “lengthy and thorough.”

In his arguments, Perlmutter summarizes the similarities in the accounts by the women, whose identities are covered by a publication ban.

One woman said Heard was working alone when he offered her a ride home from the Enteraintment District in the early hours of Sept. 24, 2015. The woman, who was then 27, said he inappropriately touched the inner thigh, close to her vagina.

She later complained, and an investigation was launched by the Special Investigations Unit, the provincial watchdog that probes allegations of sexual assault by police. In October 2015, Heard was informed he was under investigation in connection to the allegation.

On Nov. 1, 2015, Heard offered another lone woman a late-night ride home in his police SUV — a move Otter called “blatant conduct that defies common sense and risks his professional career.” That woman, then 25, testified that as he dropped her off, Heard touched her inner left thigh, near her pubic bone, causing her to “slap his hand away.”

She later read a news report about a sexual assault charge being laid against Heard, recognized his name and face, and decided to come forward with her account of being assaulted, saying she “couldn’t turn the other cheek” after she read the report.

Perlmutter argues that Otter “improperly limited the scope of the evidence” he was required to consider and failed to properly consider the “evidence in its totality.” He also alleges that Otter’s reasons for the decision are insufficient.

The appeal is scheduled to be heard Sept. 14.

Heard is also facing professional misconduct charges under the province’s Police Services Act stemming from the criminal charges. According to a summary of the allegations contained in tribunal documents, Heard is accused of failing to inform the communications operator of his whereabouts after picking up the first woman.

He is also accused of belatedly including an account of that encounter in his police notes after learning the woman filed a complaint against him.

None of the allegations have been tested at the police tribunal. Heard has been suspended with pay since May 2016.

Wendy Gillis is a Toronto-based reporter covering crime and policing. Reach her by email at wgillis@thestar.ca or follow her on Twitter: @wendygillis