A baby was abandoned in a phone booth 64 years ago. Now, DNA has helped explain why. 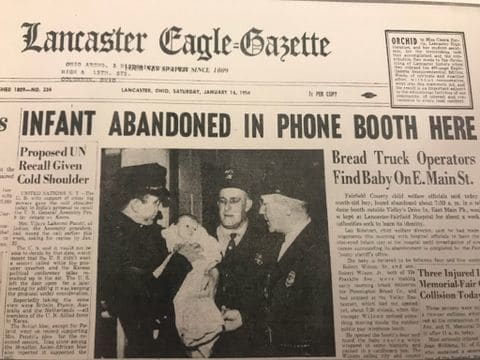 The front page of the Lancaster Eagle-Gazette on Jan. 16, 1954, after “Little Boy Blue Eyes” was found in a telephone booth. (Meagan Flynn/The Washington Post)

Steve Dennis’s birth certificate didn’t say where he was born or when, or to whom. It just said he was found in a telephone booth.

Two bread deliverymen had found him there early one January morning in 1954, back when Dennis didn’t yet have a name. They found the “big blue-eyed infant” wrapped in blankets inside a cardboard box in the phone booth just outside Yielky’s Drive-In near Lancaster, Ohio, the Lancaster Eagle-Gazette reported at the time. There was no telling how long he had been there, perhaps only a few hours. The baby was very cold to the touch, the paper reported, and so was the bottle of milk left with him in the box.

The mystery soon captivated the residents of Lancaster. In just two days, dozens inquired about adoption, and “literally scores of persons” tried to help police identify the baby abandoned in the phone booth, the Eagle-Gazette reported in 1954.  Nobody knew who put him there or why, and for a long time in the decades that followed, Dennis didn’t know either.

For years, the whole story struck him as too bizarre to even be true, as he told the Eagle-Gazette’s Spencer Remoquillo in a follow-up story 64 years later, on Friday. Dennis had always known he was adopted as a baby, but he didn’t learn about the phone booth until he was a teenager. He got curious. He traveled all the way to Lancaster just to see it for himself. But he didn’t find very much there, he told the Eagle-Gazette. He didn’t think he would ever find his birth parents, and for most of his life he didn’t think anything of it, either.

But that changed when his two children, 18 and 14 years old, started asking questions.

“They’re always really curious about, Dad, you know, where are you from? You know, what is your heritage?” he said from his home in Phoenix in a video interview published by the Arizona Republic.

They decided that Dennis, a retired chiropractor, would submit his DNA to the website Ancestry.com to find out.

After gaining popularity in recent years, Ancestry.com and other sites like it have been responsible for solving countless cases of long-lost family members, even assisting police with cracking cold cases in which the alleged killer left DNA at the scene, such as in the case of the Golden State Killer.

For $99, people can order the DIY DNA-testing kit, take a swab of their saliva at home and send it back for the results. Ancestry.com has helped a 79-year-old woman meet her 100-year-old birth mother. It has helped two long-separated brothers find that they were attending the same college.

And it was about to help Dennis find his mother.

Within three months of submitting his DNA to Ancestry.com, he got an email, he said in his interview with the Arizona Republic. A first cousin had “matched” with him, the cousin said — and he believed he knew Dennis’s mother.

He said, ‘You know, I think I know who your mother is,’ ” Dennis said in the video. “ ’We’ve heard throughout our lives that there was a baby that we were related to that was left in a telephone booth. It was just like this hidden secret.’ ”

The cousin put him in touch with his half sister, who then contacted their mother, Dennis said.

By then she was 85 years old, living in Baltimore and at first had a hard time remembering all the details. But slowly, “week by week,” Dennis said, it came back to her.

Dennis was reportedly told that she gave birth at age 18 but that his father gave her an ultimatum: They could only marry if they left the baby, the Eagle-Gazette reported. On a drive through Ohio from Kentucky, where Dennis was born, his birth father allegedly made the decision himself, taking the baby and leaving him in the phone booth.

“After the baby was gotten rid of — myself — he disappeared,” Dennis said in the video. “Nobody knows where he went. So these sisters are half sisters. But to me that’s a lot, because considering growing up an only child, it’s better than nothing.”

Dennis said he will be traveling to Baltimore to meet his birth mother later this month and “will take whatever she gives me and leave it at that, because you can’t hassle an 85-year-old woman, of course.”

He would have liked to learn his birthday, he said, but was told the date has escaped his mother.