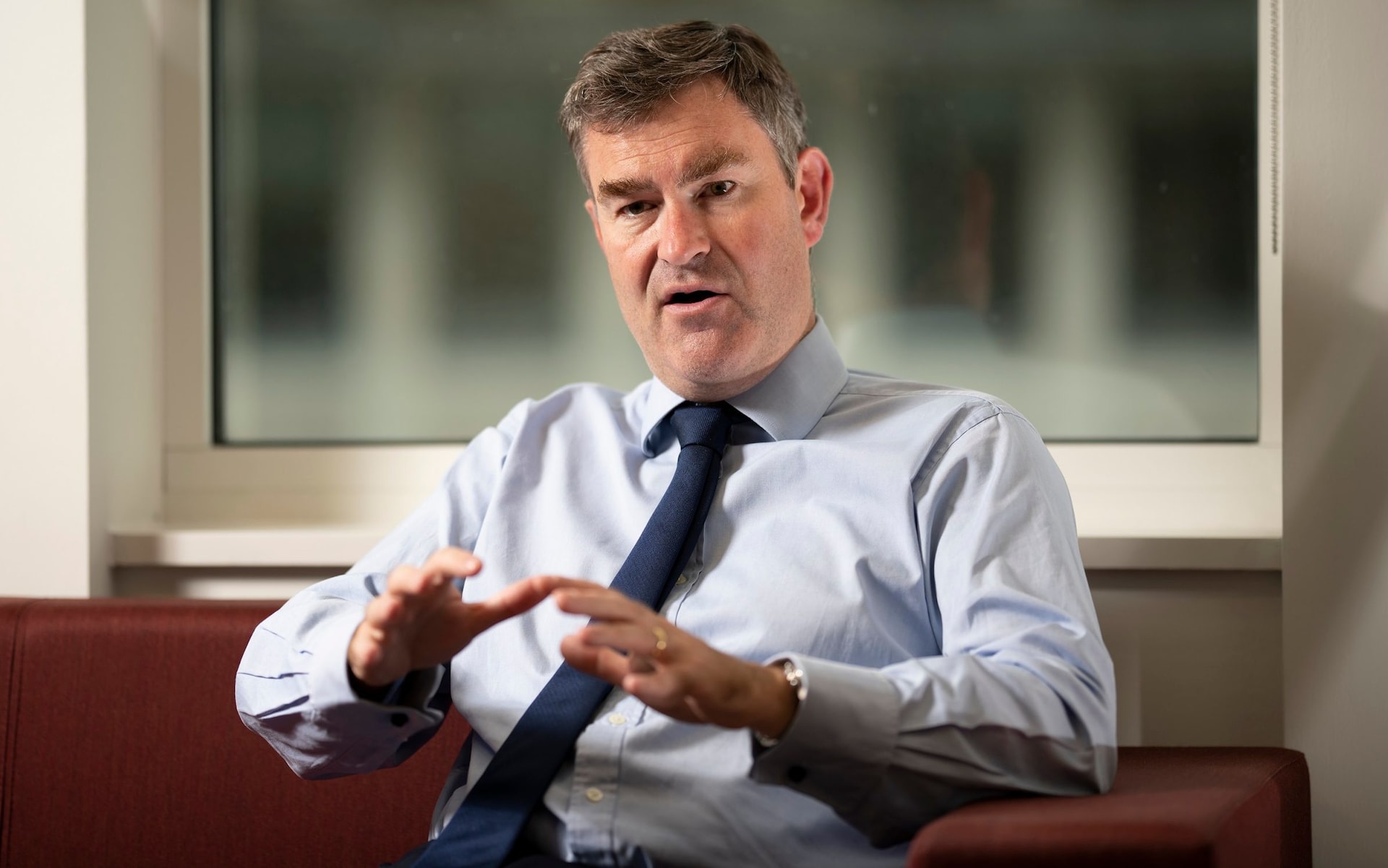 David Gauke, the Secretary of State for Justice and Lord Chancellor, has said he will place rehabilitation at the heart of his prisons strategy Credit: Christopher Pledger for the telegraph

As many prisoners as possible should be given telephones in their cells, the Justice Secretary has said.

David Gauke says allowing inmates to make calls within the privacy of their cell is a “real game changer” in improving behaviour and helping with rehabilitation.

In an interview with The Telegraph, Mr Gauke, who took over the Ministry of Justice in January, states: “All the evidence is pointing towards in-cell telephony helping, so its wider use, I think, makes a lot of sense.”

The phones, which are partly designed to curtail the use of illicit mobile devices, would be limited to set, pre-approved numbers, with prisoners still required to pay for their own calls.

But Mr Gauke’s comments are likely to draw a sharp reaction from prison officers, whose representative body insists prisoners already enjoy a “first-class” array of benefits. They may also be opposed by some victims.

Speaking ahead of the publication of the Government’s victims strategy tomorrow, Mr Gauke says making it easier for prisoners to keep in touch with family members can help reduce re-offending, leading to “fewer victims”.

The victims strategy will include a review of the compensation scheme for mental and physical injuries arising from violent crimes. Mr Gauke says that under the current system, some victims of childhood sexual abuse are “almost being punished twice” due to a rule precluding anyone with unspent convictions from claiming compensation.

“We know the effect of childhood sexual abuse might mean that someone is more likely to commit crimes later in life,” he said. He also suggests the scheme, which caps payouts at £500,000, fails to recognise the relative “magnitude” of injuries sustained in terrorist attacks.

On prisons, Mr Gauke says: “Prisoners have got access to a limited number of phones on their landing but they can only [make calls] when they’re out of their cell. That means there are long periods of time when they don’t have access to a phone, they don’t have the same degree of privacy from other prisoners, and very often it can be a source of friction …” He adds: “The message that I hear time and time again from prison governors and prison officers is that can be a real game changer.

“I was in Germany on Monday and I visited a prison there and they have in-cell telephony very widely and they have exactly the same experience. They find where you bring it in, it improves behaviour.” He says its wider use in Britain “made a lot of sense”.

Mr Gauke separately suggests that the rising elderly population in Britain’s prisons could lead to “more dedicated” buildings for older prisoners. And he reveals he is in discussions with the judiciary over rolling out the use of television cameras in crown courts.

Interview ‘We can ensure that the system treats people with respect’

In January David Gauke became the sixth Conservative justice secretary to take up office in the eight years since the 2010 election. He does not, however, appear to be someone preparing to hand over the reins any time soon.

On Monday, he unveils a new cross-government strategy designed to improve the way victims are treated in the criminal justice system. He is also developing plans for the future of the country’s prisons and courts, rooted, respectively, in the concepts of rehabilitating prisoners to help prevent re-offending, and open justice.

In an interview with The Telegraph Mr Gauke describes how the rising number of sexual abuse cases has exposed serious flaws in a system that allows victims to receive compensation for mental and physical injuries arising from violent crimes – under the Criminal Injuries Compensation Scheme, victims of crime who have unspent convictions are barred from receiving anything.

“We know the effect of childhood sexual abuse might mean that someone is more likely to commit crimes later in life, sadly,” Mr Gauke says. “Should that preclude somebody from receiving compensation?” 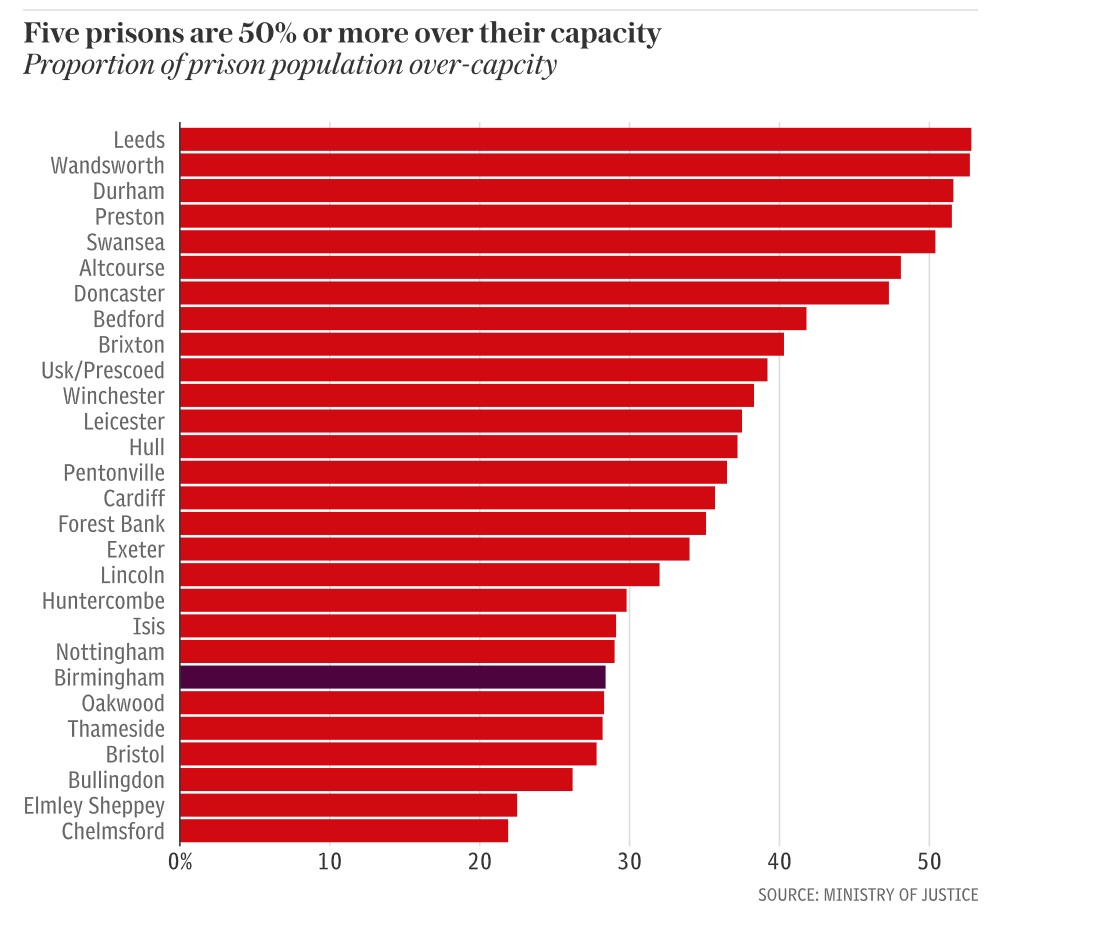 Current rules “may mean that they’re almost being punished twice”, he says, adding: “We’re aware of cases where that has been an issue.”

Mr Gauke is also eyeing the current approach taken to terror victims seeking compensation after an attack. The present system, he suggests, can overlook the “magnitude” of injuries sustained in horrific incidents like the Manchester Arena bombing last year.

“In those circumstances we need to ensure there is sufficient flexibility within the compensation scheme to see that those victims are properly compensated,” he says.

Mr Gauke endured a rocky start as Justice Secretary. Just three months in, he faced demands for his resignation when the Parole Board approved the release of John Worboys, the black cab rapist, from prison, and Mr Gauke chose not to appeal against the decision based on legal advice saying he had little chance of success.

Two victims then brought their own successful challenge, leaving Mr Gauke with egg on his face.

The memory of this is unlikely to be far from his mind when he sets out his plans on Monday.

It is a focus on victims, he says, that drives his approach to prisons: “I have stressed … the importance of rehabilitation [of prisoners], and the reason I do that is that if we can reduce reoffending we will see lower levels of crime, we’ll see fewer victims.”

"All the evidence is pointing towards in-cell telephony helping, so its wider use, I think, makes a lot of sense"

ducation and work within prisons are crucial to rehabilitation, he says. But so too is helping prisoners maintain contact with their families. This is most easily made by telephone, but phone provision in communal areas, which can only be accessed at certain times, risks stifling that contact and missing an opportunity.

“Prisoners have access to a limited number of phones on their landing but they can only do it when they’re out of their cell. That means there are long periods of time when they don’t have access, they don’t have the same degree of privacy, and very often it can be a source of friction as people are waiting to go on a phone.”

After an initial trial to install phones in individual cells to remove some of those obstacles, Mr Gauke announced in July that another 20 prisons would have phones fitted, in a £7 million move partly designed to reduce the flow of illicit mobile devices. But he suggests he is preparing to go much further.

“The message I hear time and again from prison governors and officers is that can be a real game changer. I was in Germany on Monday and visited a prison where they have in-cell telephony very widely and they have exactly the same experience. They find where you bring it in, it improves behaviour.” 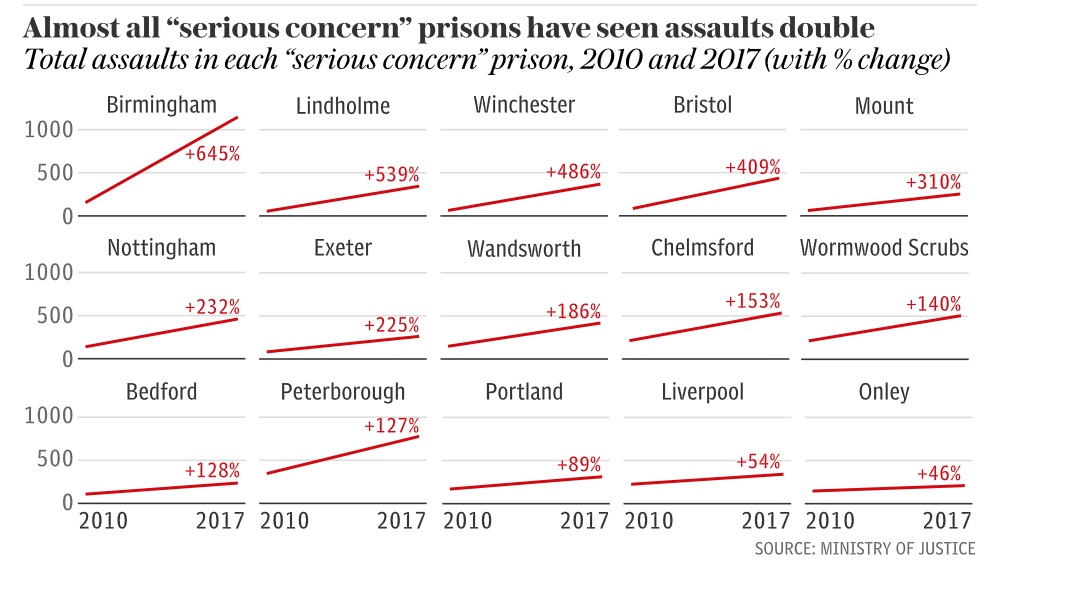 On the prospect of a roll-out of the scheme across the country he adds: “All the evidence is pointing towards in-cell telephony helping, so its wider use, I think, makes a lot of sense.”

As part of ensuring the country’s range of prisons is fit for purpose, Mr Gauke is examining how the buildings could be adapted to cope with ageing populations. In the future, he suggests, we could even see dedicated facilities for older prisoners. Last year Peter Clarke, the chief inspector of prisons, raised the possibility of “something that might look more like an old people’s home with a wall around it.”

Mr Gauke says: “You can’t necessarily put everybody into one category just depending on their age, but clearly the projections suggest that we’re going to have a larger older prison population that we’ve had up until now and the estate will need to reflect that … I think the numbers would suggest elements of existing prisons being adapted, but as the numbers change there may be a case for something slightly more dedicated.

In recent years, the decline of local newspapers has reduced a traditionally vital layer of scrutiny of another significant element of Mr Gauke’s brief – the courts.

“Local newspapers are changing. They are not the forces they once were,” he says. “But there may be other means with which we can ensure that we have a transparent system and open justice.”

Mr Gauke reveals that he has held talks with Sir Terence Etherton, the Master of the Rolls, about allowing television cameras into crown courts across the country, following a limited trial that began two years ago.

“I am very much judge-led by this but I am supportive of it,” he says. “The Master of the Rolls is very keen, for example, that we do more in terms of sentencing remarks by judges and I think that does provide an opportunity to give a perhaps more accessible explanation to the public why judges reach particular conclusions.”

He adds: “I’ve had conversations with the Master of the Rolls on this and I’m keen to ensure that we continue to make progress here.”

Congratulations to David Gauke on making perhaps one of the most progressive and valuable decisions in the modern history of prisons.

Other countries such as Canada, the USA and Australia should make a similar decision for similar reasons.

Telephone calls are used as a form of extortion of money from relatives, with as examples, Ontario, the USA and Australia all charging around $1  per minute to be paid for by relatives. Professional criminals are simply not affected. It affects the innocent, the 70% of so of prisoners who have yet to face trial.  It's part of being able to punish before conviction, its often police intimidation, and extortion of a plea in order to expedite what is deliberately created delays.